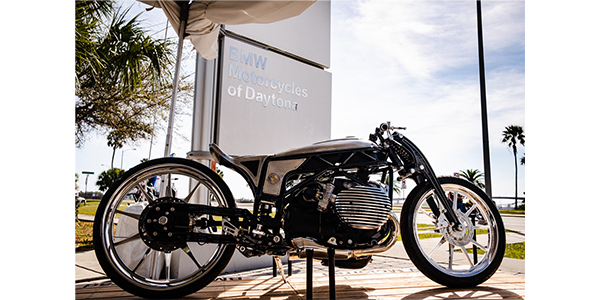 In 2010, the economy and the powersports industry was slow, but Sprague was willing to put it all on the line and take a chance to follow his passion.

The Ozark Mountains of Arkansas are known for inspiring adventure, but when Aaron Sprague, owner of Euro Cycles of Central Florida, was a kid, his uncle took him on a thrilling motorcycle ride, blasting through the twisty roads of the well-known region.

Immediately catching the motorcycle bug, Sprague got his first bike when he was eight years old and has been riding ever since. In his 30s, after a career in the medical field, Sprague decided that it was time for a change. He set off on an 18-month motorcycle trip around the world and upon his return he set his sights back on business, but this time doing something he loved.

Shopping for motorcycles in his area carried a stereotype that portrayed low customer appreciation and was a sometimes-daunting experience, but Sprague had an idea to eliminate the stigma that had local powersports in a pigeonhole.

Being a customer of Euro Cycles of Tampa Bay, Sprague knew the owner and struck a deal to buy the business. In 2010, the economy and the powersports industry was slow, but Sprague was willing to put it all on the line and take a chance to follow his passion.

For both the first and second years, sales numbers of the dealership doubled and within three years, Sprague and his team were pushing the business close to its capacity, churning out impressive sales figures for BMW and Ducati and holding top numbers for dealerships in the southeastern U.S.

Sprague attributes his secret for prosperity to his passion for motorcycles.

“In this industry in particular, you have to be an enthusiast to be successful,” Sprague said. “The previous owner was an attorney; he was just not a motorcycle rider.

“Being a motorcyclist, I made a lot of changes that cater to other people that are of like mind. Allowing people to do demo rides, creating a lounge area in the dealership and having Wi-Fi are just a few of the immediate changes that were made.”

Then, in 2016, BMW of Orlando and BMW of Daytona came up for sale. Sprague recognized the opportunity and completed a deal for both locations, taking ownership in 2017 and creating the Euro Cycles of Central Florida family of dealerships.

Knowing motorcycle culture and wanting to create a destination for his customers, Sprague focused on promoting his business through group events and a friendly atmosphere.

“My goal is to do a different event at every dealership every single week, so we always have some reason to drive traffic and to have people come here and hang out,” Sprague said. “When we get done riding, we want to hang out with people and talk about our rides and talk about our motorcycles.”

Sprague explained that prior to purchasing his first dealership, he purchased seven motorcycles and not once did the dealership give him a reason to ride them.

“I was determined to change that,” Sprague said. “If you buy a motorcycle here, I’m going to give you a million reasons to get on that thing and ride it. That was my biggest influence.”

He created an environment where his customers feel welcome, changing the attitude of business.

“Come in, hang out, let’s watch a movie about motorcycling, watch Moto GP or have lunch,” Sprague added. “Your customers are your best advocate. If you have people standing around or talking about bikes and somebody comes over and starts looking at that bike, they’re going to start telling them how awesome the motorcycle is.” It’s this type of atmosphere that makes people feel very comfortable in his dealerships and makes them want to be there.

Euro Cycles of Central Florida has been using a customer relations management software for the past couple of years. While it has been genuinely helpful for keeping track of customers, following up on leads and making sure appointments are being met, Sprague reinforces the fact that they are more of a cultural sales dealership. He emphasized that their relationship with customers is what makes them successful but pointed out that he would not be able to do his job without his employees.

“I have a phenomenal staff,” Sprague said. “Buying Orlando and Daytona was a team decision and a team effort. It wasn’t just me.”

He explained that his employees at the Tampa dealership have been spread out into a senior management team to help run all three dealerships. The value of good employees and treating them right is not lost to him.

For Daytona Bike Week in 2018, Sprague and his team created their own party at the Daytona dealership, complete with BMW demo trucks and multiple vendors.

“We had so much fun! We sold stupid numbers of motorcycles and we really had a blast,” Sprague said. He and his team held another event for 2019, with some spectacular new and custom bikes on display.

Euro Cycles of Central Florida offers something for everyone and gets their customers motoring on BMW, Ducati, Aprilia, MV Agusta, Energica, Moto Guzzi, Vespa and most recently Triumph.

Earlier this year, Sprague and his team opened a retail location at the well-known Ace Café in Orlando and are in the process of building another dealership in St. Petersburg. With three successful dealerships, a retail store and more yet to come, Sprague and his team of motorcyclist employees are proving that supporting the culture brings it all together in the Sunshine State.