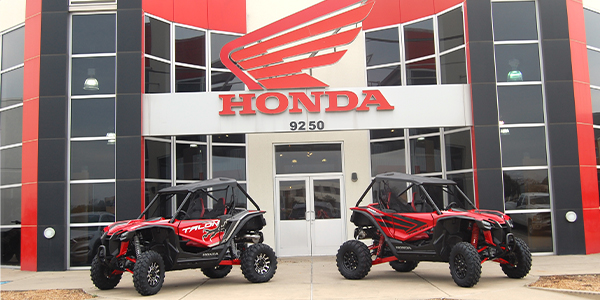 Lamb brought his fiercely competitive flat track attitude to running his new dealership, and soon realized he had not only found something he was good at, but something he enjoyed.

After racing flat track for several years, and then finishing college, Al Lamb dutifully found a job, but it required he spend most of his time in a windowless cubicle.

He thought, “there has to be more to life than this!” and in 1977, purchased an existing Honda dealership in Dallas, TX.

Lamb brought his fiercely competitive flat track attitude to running his new dealership, and soon realized he had not only found something he was good at, but something he enjoyed.

Dallas Honda thrived under Lamb’s leadership. Within a short period of time, the shop had outgrown its building on the south side of the freeway, so he had a new, larger shop built on the north side of the freeway. By 2005, Dallas Honda had outgrown that building as well. The present location boasts 34,000 square feet of space. The dealership has earned Honda’s Powerhouse 5 designation for full-service dealerships that provide customers with an exemplary experience.

When asked, Lamb is quick to credit his success to his team. “I’ve always had good crew.”

Many of the Dallas Honda employees also come from the racing world. “Ted, brother of Hall of Fame Flat Tracker Terry Poovey, has been the service manager since 1977,” Lamb said.

Online reviews comment on how helpful and knowledgeable the staff is: “Dallas Honda is a dealership staffed by motorcycle enthusiasts.”

Lamb believes that by concentrating on the Honda brand, the dealership can deliver a world-class experience to his customers.

He is also a hands-on owner. Within a few seconds, he can tell what percentage of his sales are of larger motorcycles, smaller motorcycles, ATVs, scooters and side-by-sides. Given the dealership’s location in North Texas, within a day’s ride of large ranches, a good percentage of his sales are side-by-sides. Most of the people who buy these vehicles from Dallas Honda are landowners who use them for hunting and working on their own spreads.

Given that these ranchers have a lot of acreage to cover, a powerful motor is a must. “We don’t sell smaller 4 x 4’s,” Lamb noted.

Now that the Talon, Honda’s new recreational side-by-side, is on the sales floor, recreational sales are beginning to ramp up. “Before, only a small percentage of our sales were to recreational users,” Lamb commented. “Now we have the Talon and can compete.”

The dealership not only has the products that Texas property owners want, but also knows how to reach out to them. The Dallas Honda marketing team knows its customers and knows that local ranchers are internet savvy and spend time on social media. Although Dallas Honda does buy some ads in farm and ranch publications that seem to be cost effective, for the most part, the team feels “traditional media is not the way to compete.”

While the dealership sells a lot of Gold Wings, ATVs and off-road motorcycles, as one would expect, they also move a lot of scooters and smaller road bikes, especially the Honda Grom. They actually sell more Groms than Gold Wings. Scooters and Groms are mostly bought by younger customers, many of whom took the Go Motorcycle training classes that are run in the dealership parking lot. Dallas Honda has found that the classes are an excellent way to bring in new customers.

“It’s the best way to get younger people in,” Lamb said. “I just got two credit applications from people who took the class. Fewer people just walk in the door than they used to. We have to try to attract people. The school is a good way to do it.”

Lamb also sponsors a flat track team, and throws a pre-race party when the American Flat Track circuit heads for Fort Worth and the Texas Half Mile. He also continues to compete himself. Lamb is a World Land Speed Record holder, and his land speed bikes are proudly displayed in the dealership. Customer events include Demo Days — where just about every vehicle sold by Dallas Honda is available for a test ride — and dinner rides for the after-work crowd.

Lamb is also planning to revive the several days group rides he did a few years ago. “It’s important to be interactive with your customers after the purchase,” he said.

Another way Dallas Honda ups sales is by training the staff to positively interact with women who come in, either by themselves or accompanying a significant other, friend or relative.

“We have found that more buying decisions are made by women, whether they are going to ride the vehicle or not,” Lamb said. “It makes sense not to ignore the person who is actually going to give the OK.”

Due to this welcoming attitude, 15% of Dallas Honda’s owners are women.

“As a matter of fact, my girlfriend and daughter ride, and my mother rode until just a few years ago, and she is 82,” Lamb said.

Instead of fighting the trend to internet sales, Dallas Honda has set up their own internet sales department, which stays busy, even attracting international customers. Gear by Arai, Shoei, Joe Rocket, Firstgear, Tourmaster and Gaerne, among other major brands, is two clicks away, with a price guarantee. Customers can also call the dealership’s 800 number. A state-of-the-art website complements internet sales, with a 24-hour chat service, and numerous videos showcasing current stock, the flat track team and Lamb’s land speed efforts at the Salt Flats and other venues. Videos of Lamb’s racing efforts and the Dallas Honda flat track team give customers a reason to visit the website, even when they don’t currently want to buy anything.

Another profit center is sales to the General Services Administration and other government agencies. Dallas Honda actively seeks out and promotes fleet sales. Fleet sales to city, state and federal agencies involve a lot of red tape and filling out forms, but the team believes the effort is worth it for the steady business, which often also includes a maintenance contract.

Since the 2007 downturn in the economy and the rise of internet competition, making a profit is harder than it used to be, but Lamb still comes to work every day with that competitive attitude.

“Whether it is the largest selection of Hondas in North Texas, financing, warranty contracts, parts, accessories, clothing or safety equipment, Dallas Honda has it,” Lamb said. “I like that a customer can come to my Honda superstore and get it all. Oh, by the way, after 42 years, I still like what I am doing.”