Two out of the three major OEMs have already introduced their 2012 personal watercraft lineups, and the results continue to push the PWC market forward, both in terms of performance and amenities.

Two out of the three major OEMs have already introduced their 2012 personal watercraft lineups, and the results continue to push the PWC market forward, both in terms of performance and amenities. 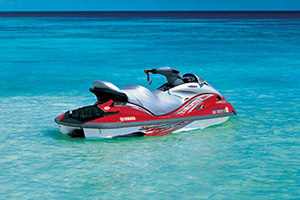 Yamaha’s 2012 offerings focus on a remake of the company’s flagship FX lineup. The craft that first introduced a four-stroke engine to the PWC marketplace, the FX line now consists of four models — the FX Cruiser HO, FX HO, FX Cruiser SHO and FX SHO — all powered by variations of the company’s 1.8-liter powerplant. For 2012, the boats have been stretched — 7 1/2 inches longer than the previous model — and retooled for passenger comfort. The seat is longer, the boarding platform is roomier, and a new wider, deeper, flat-stepped boarding step makes for easier deepwater boarding, especially with an added grab handle mounted low on the platform. Cruiser models also get a bolstered, theater-style seat; each successive spot is raised slightly above the seat in front, allowing passengers a better view forward.

The FX design is edgier in 2012. Yamaha’s hull material is hard to mold in sharp facets, so additional pieces have been added to the hull to achieve the desired look. That form often adds function. An aft styling addition includes a small stowage compartment that is a choice spot to keep tow-sports ropes or other wet items. Other improvements include relocated mode buttons for the info display and a “mechanical” neutral, a detent built into the reverse lever’s throw that redirects thrust to mimic a neutral setting.

The entire series’ ride has also improved. It now rolls predictably into a turn with an intuitive inside lean.

Following a year in which it focused on a more entry-level, recreational segment, Sea-Doo is returning to its performance roots for 2012. The marque craft is the RXP-X 260, a complete re-imagining of the brand’s iconic musclecraft. The ’12 version features a multi-stage running surface below the bondline, with a lowered center running pad that allows the boat to run on a reduced running surface at speed. Softly rounded chines prompt the boat to roll easily into a turn and hold it in place once on edge. New sponsons with a perpendicular winglet hold the boat through a turn, no matter how far it gets rolled on edge.

Complementing the handling is a unique seat design. It’s narrow and sculpted in an hourglass shape, with an upper flange that flares over the driver’s thighs. Along with canted footwell wedges, the design allows a driver to lock himself into place, using the stronger muscles of the legs to handle the hull’s G-forces. The boat also features Sea-Doo’s Intelligent Brake and Reverse (iBR), as well as the multiple acceleration profiles made possible by electronic throttle.

Sea-Doo also introduced several additional craft for 2012, including the GTR 215, an inexpensive musclecraft that packages a supercharged 215 hp engine within the light and nimble GTI series hull; the GTX S 155, a more affordable version of Sea-Doo’s suspension-equipped models; and a modified RXT-X aS, the performance suspension model that now features new forward sponsons that keep the boat from digging in big waves, redesigned aft sponsons and manually adjusted trim tabs to tweak the boat’s running angle.

Kawasaki? We’ve yet to hear the company’s 2012 plans, but they’ll certainly continue to include the Ultra 300X, the powerful, big-water performer that discovered newfound handling skills in 2011 thanks to the addition of electric trim.

Jeff Hemmel has been covering the personal watercraft industry for over 20 years and is a member of the International Jet Sports Boating Association Hall of Fame. His work appears in numerous titles, including Boating Magazine, Boats.com and PersonalWatercraft.com.