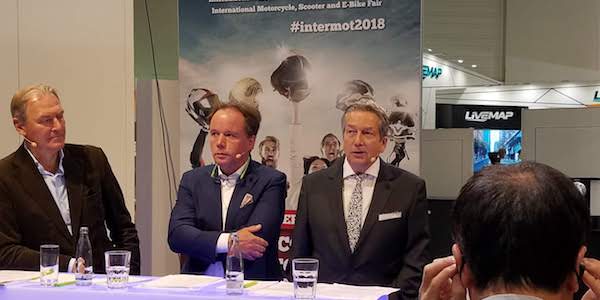 Gerald Böse, president and CEO of Koelnmesse GmbH, said that 66 percent of the 1,041 exhibiting companies and brands have come from outside of Germany for INTERMOT 2018.

In comments by Gerald Böse, president and CEO of Koelnmesse GmbH, at the opening press conference for INTERMOT 2018, he said that 66 percent of the 1,041 exhibiting companies and brands have come from outside of Germany. The countries most widely represented at INTERMOT are Italy, China, Great Britain, Netherlands, USA, France, Taiwan, Austria, Pakistan and Spain.

“Groups of exhibitors representing China, Great Britain, Italy, Pakistan, Taiwan and the USA are taking part,” said Böse.  “Of course, leading manufacturers such as BMW Motorrad, Ducati, Harley Davidson, Honda, Kawasaki, KTM, Kymco, the Piaggio Group with the Aprilia, Moto Guzzi and Vespa brands, as well as Suzuki, Triumph and Yamaha are exhibiting on the show floor. And Indian Motorcycles has significantly expanded its presence this year.”

Böse also spoke about INTERMOT customized in Hall 10.1, which they developed two years ago as a “show-in-show” concept and integrated into the overall event, is significantly bigger and more international this year.

In line with the trend toward individuality and lifestyle, several of the major manufacturers have added space and will be demonstrating their customizing competence. These include BMW Motorrad, Harley Davidson, Kawasaki, Yamaha and also, for the first time, Suzuki and Indian.

Renowned distributors such as Custom Chrome Europe, Louis, Motorcycle Storehouse and the parts specialist Zodiac will also be represented together with internationally renowned custom builders. Böse said that numerous suppliers will also be showcasing accessories for the customizing market – from clothing and helmets to custom made parts and exhaust systems.

“Side events that fit into the scene, such as the Garage Area where a brand new Ducati Scrambler SCR 110 and a used Honda CB 450 S will be professionally customized according to concept ideas will accompany the motorcycle fans in the INTERMOT customized section,” Böse said. “The AMD Championship of Custom Bike Building that is staged every two years in Cologne is guaranteed to be a crowd-puller and with 107 bikes registered is boasting record participation this year.”

Böse noted that no other motorcycle trade show offers so many varied and spectacular events as INTERMOT. “We are particularly delighted that the organizers of the Mogo in Hamburg are taking INTERMOT as an occasion to celebrate an ecumenical service at the Cologne Cathedral on October 3 again this year. After the service, the participants will then drive to INTERMOT in convoy.”

Böse concluded: “One theme that is moving the entire industry and which challenges us all is the “digitalization” and here especially the “connectivity”. The digital transformation opens up big chances for more quality of life, new business models or a more efficient business economy. The “Connected Motorcycle World” theme zone, where we are located now, demonstrates which themes and digital solutions are currently occupying the motorized motorcycle industry, which digital technologies will change the motorcycle and driving motorcycles – whether in terms of safety, communications or comfort. INTERMOT, together with the companies BOSCH, Cardo Systems, digades, Ebility, Sena and the Connected Motorcycle Consortium, CMC, with its founding members BMW Motorrad, Honda and Yamaha – will showcase the latest solutions and innovations here.”

“When viewed across all sectors, whose products and services depend on motorcycles, the focus broadens to include petrol stations, events, insurance, tourism, publishing houses, trade fairs etc., the motorcycle industry earns an overall turnover of Euro 11.6 billion at home and abroad,” Keller noted. “And what is perhaps even more important for the economic stability in this country: The motorcycle industry in Germany secures in the broader sense 130,000 jobs.”

The final speaker of the morning’s press conference was Reiner Brendicke, IVM general executive manager. He said there will be five themes  in the “Connected Motorcycle World” hall for visitors to experience, including the following:

“As we all know, this is particularly relevant for the safety of us motorcyclists, since a host of accidents occur because the motorcycle is overlooked by the car driver,” said Keller.

“IVM has been observing the development and complexity of highly- or fully-automated cars and from the very beginning for the research of the Connected Motorcycle Consortium,” Keller noted. “In an ever increasingly complex mobility structure, motorcyclists can only profit from people doing research into this field. The concept of connectivity for motorcycles – exchanging information about speed, location and direction with other road users to warn against potentially dangerous situations, has been studied since 2009. In reality, this can mean that motorcyclists will be able to recognize surprises from side streets, dirt roads and forest paths early enough to avoid an accident.”

Keller concluded that what is being presented at Connected World is not a Star Trek story, but rather the reality of today and beyond. Despite “Big Brother” objections being thrown into the mix of next-level car-to-car and motorcycle communications, Keller said one analog excuse could forever be eliminated – “I am sorry, I didn’t see you.”

Advertisement
In this article:INTERMOT, INTERMOT 2018, IVM