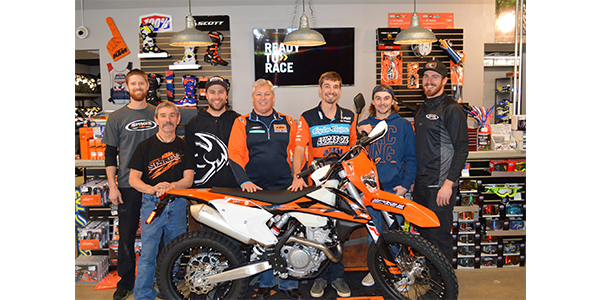 “As we expanded, we really focused on what I would want as a racer or the way I felt racers needed to be treated.”

As a racer, General Manager Justin Brinn frequented his local powersports dealership, first called Spyke’s Harley-Davidson in the mid-2000s, passing through the street bikes to get to the KTMs.

“I started going to Spyke’s as a racer in 2008, then working at the dealership in 2009 and eventually got to open the front door for the KTM side of the operation,” Brinn said. “I don’t know if I knew what was happening, but it was really, really small scale, kind of like a side project, then all of the sudden, it started gaining a lot of traction.”

After a husband-and-wife operation tried to split brands, causing some difficulties trying to separate OEMs at different locations in Indiana, the Brinn family purchased the Lafayette-based Spyke’s in 2013, focusing on three main OEMs including KTM, Husqvarna and Cobra, and is now an authorized center for WP Suspension.

After the purchase, Spyke’s began to outgrow its space.

“We rented month-to-month from that Harley shop, and after roughly a year, we were given three days’ notice that we needed to move,” Brinn said. “We moved into a bridal and tuxedo shop and had our eyes on another building, so we didn’t expand. We thought we’d be there for 90 days, but we went from 2,500 square feet to 7,000 square feet and that really opened our eyes to what we could do with some space and some exposure.”

After spending two years at the bridal and tuxedo shop, Spyke’s moved to a new location, giving them over 14,000 square feet to set up their shop.

“When the opportunity came for the building that we’re in now, we really knew what we wanted. We never thought we’d fill it up, and now it’s at capacity quite often,” Brinn said.

With a history on the race track, Brinn is melding his racing knowledge as a leadership platform.

“As we expanded, we really focused on what I would want as a racer or the way I felt racers needed to be treated,” Brinn said. “There’s a lot of need as far as racing support. We really didn’t want to pigeon hole ourselves by selecting a team, so we sat down and asked ourselves, ‘How can we help the most people?’”

Offering two different tiers of discounts, Spyke’s racing program is simple: customers receive a really good deal on parts and in return, Spyke’s asks for representation; from a sticker on their bike, vans or trailers, to wearing a branded t-shirt on the podium. As a result, Spyke’s is heavily present at the race track, expanding the dealership’s reach effortlessly.

When not at the track, Spyke’s is making it easier to get new riders on a bike through annual off-road demo days.

“People are very excited to test out a brand-new model,” Brinn said. “Based on feedback we’ve received, we set up a really good lap and a lot of people get to test out our bikes and they really appreciate that.”

With the help of social media and the ability to share readily available original content from the dealership, Spyke’s is welcoming more customers to the “orange side.”

“Customer service is definitely our top goal,” Brinn added. “Our staff is a really tight knit group and, like any work environment, that’s important. We’re constantly making sure we’re doing us right and what we would expect if we were the ones walking through the doors. That’s definitely been our bottom line for success.”

From the Magazine: OEM Update: Indian On a Roll