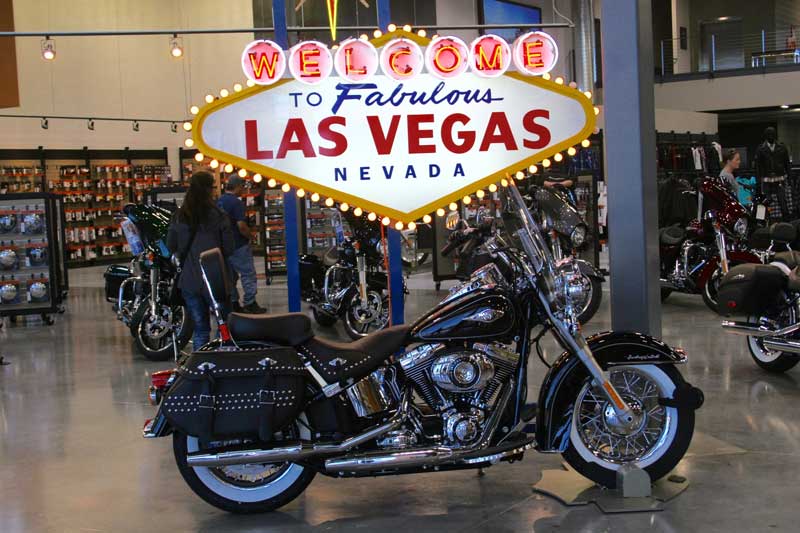 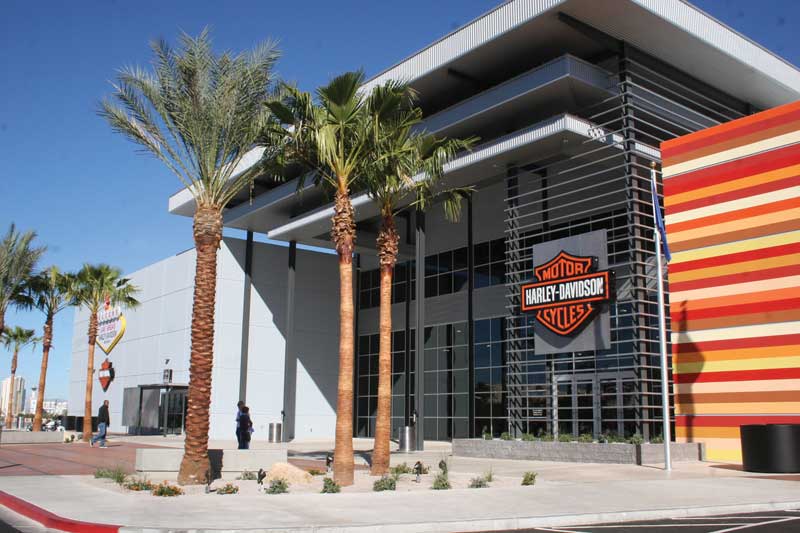 [dropcap]I[/dropcap]n Las Vegas the operative word is “big.” Everything in this town is larger than life, built to grand proportions and bling is king. The only way to stand out from the crowd is to be bigger, glitzier and louder than the rest.
Well, Harley-Davidson dealerships aren’t generally known for Liberace-like décor, so when Don Andress and Tim Cashman, the owners of Las Vegas H-D, planned the new dealership’s design last year, they chose to focus on bluster, not luster. But they certainly didn’t skimp on scale.

The first things you notice when entering the dealership are the enormous wall of glass and ceilings that run right up to the rafters. This translates to a vast, wide-open feeling that’s amplified by the conscious decision to keep sections of floor space uncluttered. This lets visitors take in the expansive space while offsetting another design element; gigantic signage around the interior. 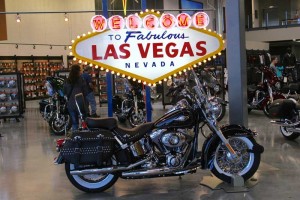 Some of the signage – such as the monster “Harley-Davidson Motorcycles” lettering – runs along the floor and right up the wall to finish on the ceiling. Even departmental signs scream their presence and one notice in particular broadcasts the happy message: “Ride All Day, Play All Night!” reminding both customers and staff that this isn’t just any shop, it’s the Harley dealership in Vegas baby, and yes, you can do that!

Tapping into the Vegas vibe is both necessary and beneficial here; at any moment a high-stakes black jack winner might turn up to plunk down cash for a brand new Harley to ride home. But being located in one of the world’s major tourist cities poses both opportunities and challenges. Especially at their new location across from the iconic “Welcome to Las Vegas” sign, the staff of LVH-D takes location into account every day, something owners of the Harley-Davidson franchise in Las Vegas have always done.
Except for a few years in the early 1970s, there’s been a Harley-Davidson presence in Las Vegas since 1940, though ownership has changed hands several times. Vegas native and lifelong rider Don Andress took over the franchise in 1995. When like-minded enthusiast Tim Cashman joined the enterprise the following year, the partners kicked it up big time, giving Harley-Davidson a larger footprint for long haul impact.

Consistent with Vegas style, they first built continuity for the brand at an impressive location on South Eastern Avenue, a 79,000-square-foot facility that was then the largest H-D dealership in the world. They added Zion H-D in Washington, Utah to the family in 2000 and Red Rock H-D, also in Las Vegas, in 2004. Branching out with another 10 satellite locations in places such as Fremont Street, New York, New York Casino, and the airport, building a regional empire in less than 20 years. And they weren’t done, yet.

In the fall of 2014, the new Las Vegas Harley-Davidson opened on South Las Vegas Boulevard right across from Mandalay Bay in the most opportunist location possible: a four acre site smack dab between the runway at McCarran International Airport and that world renowned welcome sign. Brilliant! 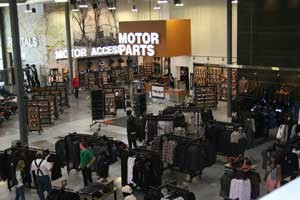 And the new building isn’t like any motorcycle shop you’ve even visited. Marketing Manager Heather Frank says, “It’s definitely different! We had to do something that was bigger and better, something that stood up to everything else that’s on this iconic street.”

And though you’ll never know from inside the 60,000-square-foot facility, a stealthy stroke of marketing genius appears on the building’s roof: the outline of H-D’s recognizable Bar & Shield. “People come in and say, ‘When I was flying in I saw the logo on the roof!’” explained Frank. Of course they did!

More brilliant still is the concept of the Recharge Zone, a separate but integral convenience store accessible to riders and non-riders alike. Many of those non-riders are drawn to the Recharge Zone from the welcome sign for a cold drink or snack, building a no-brainer income stream. It’s only a few simple steps into the dealership from there, bringing visitors in who might never have stopped on their own.

“The Recharge Zone is the only place that has refreshments between Mandalay Bay and the welcome sign, so we sell a lot of water, soda and snacks. Plus, we have things like selfie sticks and lots of generic Las Vegas souvenirs,” Frank says.

In another savvy connection aided by the new location, LVH-D is a pick-up and drop-off point for Big Bus Tours, bringing in visitors who might otherwise not make the Harley dealership a destination. LVH-D also appears on Vegas tourist maps so compared to most motorcycle shops its foot traffic is massive: about 5,000 visitors every week. Another gauge of activity? “We sell more t-shirts at this location than all the H-D dealerships in Canada combined,” said Frank.

Consistent with presence and capability, LVH-D also boasts the largest rental fleet in the United States. When a customer pops in on a whim wanting to rent a bike with casino winnings, LVH-D is ready to get them rolling. 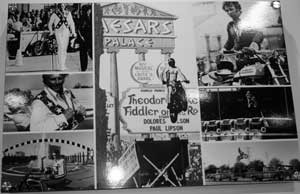 While high foot traffic is good, such an eclectic variety of visitors is one of the challenges of being in a city with international draw. “We get motorcycle enthusiasts and visitors from all over the world, and while we try to employ people who are bilingual, we can be challenged when trying to communicate,” said Frank. “But a smile is always universal.”

In further recognition of being located in Party City, LVH-D runs much longer store hours than most motorcycle dealerships. They’re open every day,
as early as 8 a.m. and on weekdays till 9 p.m. – but it goes with the territory, literally.

Of course, like most motorcycle shops, a stalwart local clientele is vital. With its sister store Red Rock H-D also located in Las Vegas, LVH-D works hard to maintain connections with its core customers. The H.O.G. chapter alternates meetings between the two dealerships and solid staff retention at both shops ensures continuity with customers. “We have people in sales and service that have been with us for a long time,” said Frank. “If a rider is wanting to upgrade, they come in looking for the person they dealt with before, someone they’re already comfortable with. It’s about relationships.” 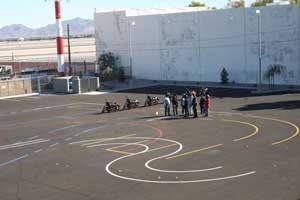 It is indeed about relationships, as most successful business owners know. And that’s true on any scale, whether small town shop or in fabulous Las Vegas, Nevada.