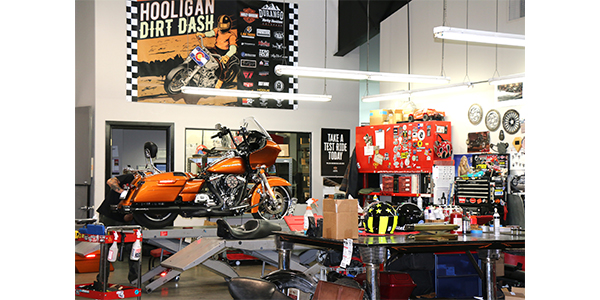 When Jeff and Jodell Murray opened a Harley-Davidson dealership in Durango, CO in 2002, it filled a deficit; before that, the nearest franchise was in Farmington, NM.

When Jeff and Jodell Murray opened a Harley-Davidson dealership in Durango, CO in 2002, it filled a deficit; before that, the nearest franchise was in Farmington, NM. The Murrays built a reputation that garnered not only customer loyalty and an enthusiastic H.O.G. chapter, but ultimately a Gold Bar & Shield award from corporate H-D, too. When they decided to sell, they wanted the right transition – and they found it when Trevor and Catie Bird visited in December 2016.

“It’s a blessing how Durango Harley came into our lives,” said Catie Bird, PR and marketing manager for the dealership. Originally from Texas, where Trevor had worked since college at dealerships and later became a partner in several, Catie said they chose Durango for its quality of life. The Birds became the new owners of Durango H-D in June 2017, moving their young family there, determined to become invested in the community. With the deal came a sister store in Silverton, CO; at 9,318 feet elevation, it’s dubbed the “World’s Highest Harley Store.” Hey, it’s Colorado, right?

The Birds took ownership mere weeks before the 25th anniversary of the Four Corners Rally, originally based in nearby Ignacio, CO. Though longstanding, the 2017 event had been canceled due to the organizer’s financial snags. But the Birds decided they couldn’t let that happen.

“We thought, it’s Labor Day weekend and this is one of the most beautiful riding destinations anywhere in the world. People are going to come here anyway, so let’s give them something to do,” Catie said.

Working quickly and in partnership with their friend John Oakes from Freeze Management, the team put pedal to the metal and pulled off the Four Corners Rally that year.

“We couldn’t do it without John,” said Catie. “He’s a great partner. John and Trevor are of the same mind, like whirlwinds.”

With 2017’s success under their belts, the team soon bought the rally’s naming rights and Facebook page, then ramped up the event in 2018. The 2019 Four Corners Rally featured even more activities, spread out over several regional venues – with rally headquarters at Durango H-D, of course. Oakes said they’ve put effort toward working co-operatively with the city, the chamber of commerce, local merchants and venues such as the Sky Ute Casino and Purgatory Ski Resort. You can’t deny the regional economic impact of such an event.

And a rally like Four Corners is substantial – one with legacy, location and fresh management – that makes Durango H-D a stand out, Trevor said. “It’s amazing the number of people who come in from across the world – Australia, Switzerland, Germany, Russia. When I worked in Texas, the riders were mainly from Texas,” Oakes added. “We focus on the fabulous riding that’s available here, the roads and the incredible scenery.”

This includes the Million Dollar Highway, voted fourth best motorcycle road in the U.S. by AMA, along with the San Juan Skyway and no shortage of two-laners with varied and intriguing landscapes.

A stated goal of the revamped Four Corners Rally – and Durango H-D – is incorporating more family-friendly aspects. That was evident at the 2019 rally’s Dirt Dash Hooligan Races on Saturday night, which included zany games and exhibition races. Trevor took to the track himself aboard a custom Harley from Dale McNamee’s Chrome Mafia Customs – just for the fun of it!

Hillclimb races took place under the chairlifts at the Purgatory Ski Resort and demo rides by Harley-Davidson and Indian were a big draw at Sky Ute Casino. Durango H-D’s H.O.G. chapter acted as ride captains – including Jeff and Jodell Murray, who remain members in continued solidarity. But it’s more than riding and rallies.

“As there are more and more big dealer groups, it’s not commonplace to walk into a dealership and talk to the owner,” Trevor said. “But we are here. After school my son will be in the service department wiping down bikes, my daughter will be folding T-shirts. When we say family owned and operated, it’s not because it sounds good; it’s truly that.”

And judging by the impact the Birds have made in a few short years, their earnest action and genuine engagement are creating a company culture that’s bursting through the shop doors, past the parking lot and into the community at large. Test that premise at the 2020 Four Corners Rally or anytime you’re riding through Durango, CO.