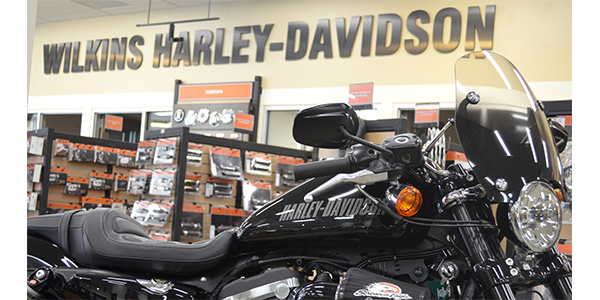 Wilkins Harley-Davidson has been doing business for 70 years. The dealership opened its doors in 1947 after Harry J. Wilkins came home from World War II, and married Barbara. 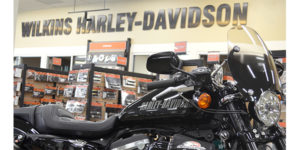 It’s a cold day in Barre, Vermont, but Wilkins Harley-Davidson, the local dealership, is seeing a lot of traffic. The crowds are coming for January’s special event: free waffles with real Vermont maple syrup. John Lyon, Wilkins’ general manager, has switched hats for the day to act as waffle chef. After people finish their waffles and coffee, they generally wander around the dealership. Often, they find something to buy.
Wilkins Harley-Davidson has been doing business for 70 years. The dealership opened its doors in 1947 after Harry J. Wilkins came home from World War II, and married Barbara. The newlyweds went into business selling Harleys. After Harry passed on, Barbara kept up the dealership, with her son and daughter, Ann Lyon, to help. Unfortunately, the son developed leukemia. John Lyon, Ann’s son (Barbara’s grandson), was working as an attorney, but when the family needed help at the dealership, he came on board. John soon found that being around motorcycles all day was much more fun than the law, and has now been general manager for the last 15 years. “I love every single day,” he says. Both Barbara Wilkins (now 89) and Ann Lyon are active owners, coming to the dealership daily.
Wilkins Harley-Davidson has earned the most awards of any Harley dealership in New England, winning Harley-Davidson’s Platinum Bar and Shield Award, given out to the top six Harley dealerships in the United States. MPN asked John how the family-owned business has become such a high achiever and stayed achieving. The answer? A welcome for everyone, regular events to keep interest in the dealership high in every season of the year, and superlative customer service.

A Welcome for All

One of the ways Wilkins has risen to the top is by keeping Legos and crayons in the showroom.
Legos? Yes, as well as other toys to keep children happy. Wilkins prides itself on being a family oriented establishment. After all, three generations of the Wilkins family – Barbara Wilkins, Ann Lyon and John Lyon – are actively working in the dealership. “Our goal is to give every person a reason to come into the shop,” says John. “We want our customers to bring the family. People are encouraged to bring their kids. We want everyone to feel included.”

Vermont’s riding season is relatively short, but Wilkins stays humming by staging events every month of the year. In addition to January’s Waffle Day, there are regularly scheduled pancake breakfasts, Garage Parties for women and Customer Appreciation Nights. March features a challenge: ride your bike to the dealership and Wilkins will pay the annual state inspection fee. “It’s hit or miss,” says John. “Last year no one showed up because there had been a blizzard and there was ice all over the roads. Some years it can be 50 degrees and we get quite a few riders. Generally, 10 people ride in.”
Many of the Wilkins’ employees are younger people. “Our staff skews young,” says John, “and our staff rides the models we sell, or have sold. We have Bike Nights all over, and we staff them with our own people. They engage the people who show up for these events.”
The website posts a link to the shop calendar and the shop newsletter on the home page. People in the surrounding area who may not even ride (yet!) go to the website to find out when the next event is. By sponsoring events that appeal to the general public (bike shows, apple bake-offs, photos with Santa Claus and, of course, waffles!) many more people than those who currently ride Harleys show up at the dealership. “We get 500 people at the August bike show,” says John.
In addition to regularly sponsored events, Wilkins sponsors the Central Vermont HOG chapter, an active group that holds monthly meetings at the dealership, and also hosts the only Riding Academy (a rider training program designed by Harley-Davidson) in either New Hampshire or Vermont. The three-day class boasts a six-to-one instructor-to-rider ratio. “We are taking future riders seriously,” says John. People who come for one of the general interest events but end up falling in love with a Sportster can sign up on the spot for new rider training. If the prospective trainee doesn’t have protective gear, a specific Wilkins employee is tasked with finding the right (Harley) gear for that particular person.
The result of all these activities and events is that Wilkins has become a social hub for riders in the vicinity. The ability to be a destination, and a center where friends meet, is an important advantage a brick-and-mortar dealership has over online stores. Wilkins has invested a lot of time and energy in making the dealership a fun place to go, in addition to being a place that sells parts, bikes and service. The results are obvious.

The Wilkins business model starts with excellent employees. “There are several layers of hiring. We focus on people who have a great attitude, even if they don’t have great experience. What we are looking for is accountability: ‘It may not be my fault, but it is my problem.’ I have my managers make the final interview. I would rather not hire than get a mediocre person.”
One way Wilkins demonstrates accountability to the customer is with back orders. The goal of the Wilkins service department is to get the customer’s bike back on the road as soon as possible. Not infrequently, the bike comes apart, and a part that is not on the shelves needs to be replaced. If the part is not immediately available from the regional distributor, Wilkins will try to get the part from another dealer. “We drive for hours sometimes,” says John.
Customers who buy a motorcycle also get John’s personal cell phone number. He answers the phone unless he is sleeping, eating or riding his motorcycle. The story is still told of the time that John answered the phone while on vacation in Ireland. On the other end of the line was a customer with a mechanical problem. John explained how to get the problem sorted out. When the customer called the dealership the next day to complete the fix, he had no idea that John was out of the country.
John does not see his business model changing in the foreseeable future, despite Harley-Davidson’s ups and downs. “Harley-Davidson has been relevant for 115 years. Our task is to stay relevant in the world as it is. There is a lot of noise in today’s world. My customers, new and old, find that they really enjoy the disconnect that motorcycling offers: a world away from the beeps and tweets, and from all that noise. For many, it’s something they have never experienced before, something similar to meditation. That’s what we have to offer, and I am proud to offer it.”

Advertisement
In this article:Destination Dealership, Harley-Davidson