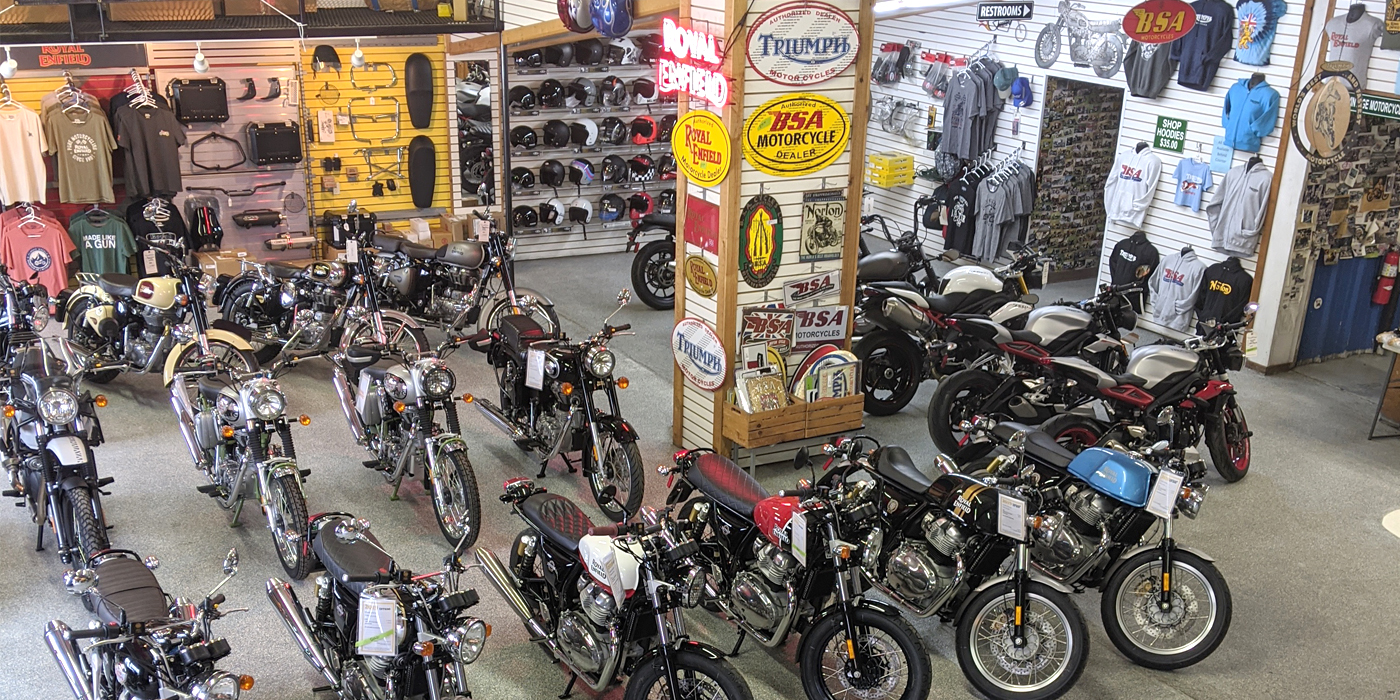 Baxter Cycle is unique. Most motorcycle-oriented businesses either concentrate on new parts and sales or vintage parts and service. Baxter does both.

Marne, IA; population 120, is midway between Omaha, NE, and Des Moines, IA, in the middle of extensive fields of corn. It is not the place where you would expect to find a large and successful motorcycle business, but there, in a big warehouse, sits Baxter Cycle, which is all of that and more.

Baxter Cycle is unique. Most motorcycle-oriented businesses either concentrate on new parts and sales or vintage parts and service. Baxter does both.

“We often have an older person bring in a vintage bike and ask how much it would cost to fix it,” explained Jeremy Pendergast, part owner and general manager. “We might add everything up and tell him $3,000. Maybe he isn’t fond enough of that bike to spend $3,000 on it. Next thing, he will be looking at the new bikes on the floor and ask how much we would give him in trade. We know how much the vintage bikes are worth. A lot of new bike dealers don’t realize it, but older British motorcycles are worth a lot of money. We can give the owner a trade in value that he won’t find insulting. So, maybe this person was about to get out of motorcycling, and now he finds he can still ride a Triumph or a Royal Enfield, but doesn’t have to work on the bike all the time and can start it on the button. We keep him in motorcycling.

“It’s not only our older customers who are interested in vintage. About once a month, we get a call from a young guy who wants the exact same bike his dad or uncle had. Although many of our older customers are brand loyalists, some of the younger ones are, too. I just sold a new bike to a twentysomething guy — he said owning a Triumph was an aspiration.”

Randy Baxter started working at a business that repaired farm implements and small Honda off-road bikes that were used for riding around farms, while he repaired Triumphs on the side. Baxter eventually realized that he was making more money at night repairing Triumphs than he was during the day working on tractors and opened his own business on Jan. 1, 1977.

“We wanted to become a Triumph dealer, and were finally accepted in 1982, just as they were going out of business,” Pendergast said. “We got three bikes, and then they were out of business.”

Baxter Cycles signed up to become a Moto Guzzi dealer and started buying carloads of parts from Triumph dealers around the country. One advantage to having a business way out in farm country is that the land to build a warehouse on and the labor and lumber to build it are both much less expensive than the equivalent in an urban area.

“We were stockpiling parts,” Pendergast said. We started putting ads in Hemmings Motor News, then in other vintage publications. We built up quite a following for British motorcycle parts. Then, when Triumph came back to the U.S. in 1995, we put in our application. We were in the second batch accepted — the 73rd Triumph dealer.”

Pendergast has been at Baxter’s for nine years, starting in parts and working his way up. Baxter is still involved in the business, but now spends much of his time on the road, buying parts collections and attending antique shows.

“Our demographic still reads magazines,” Pendergast said. The dealership holds a regular round of events to get people out to the tiny town of Marne to see its modern bikes for sale, which at present are Royal Enfield and Triumph. “We need to keep people engaged. We need to keep people coming through the doors.”

Baxter’s continued multi-year success shows what they are doing works. In fact, Baxter’s is expanding. The company is now putting the finishing touches on an outpost in Omaha, intended to be a stand-alone Royal Enfield dealership.

“We feel that the larger market area and the strong drive for entry-level or supplemental-level motorcycle sales warrants the expansion of our current Enfield dealership,” Pendergast said. “This gives us a good coverage in the Midwest in two different states with two very different marketing areas — rural and urban.”

Baxter’s big yearly event at the site in Marne is a two-day rally and no-reserve auction in August, which is on the permanent calendar of many Midwestern motorcyclists. Both the Triumph and Royal Enfield demo trucks show up for this event. In January, there is the Welldigger’s Ride, which starts at the dealership with coffee and doughnuts and goes as long as weather permits (which may not be out of the parking lot). Every three months, Baxter’s holds an open house, with sandwiches and coffee, demo rides and sales on gear.

The other way Baxter’s gets folks coming through those doors is with old fashioned customer service. The dealership has five-star reviews on both Yelp and Google.

“I’ve always been very impressed with the friendly and personable staff there. I think they hire probably the best folks in the area,” one recent commenter said. “This is one of the best customer experiences I have had,” stated another. Many (especially younger) customers start a search for a dealership to buy a bike at with Yelp or Google and will head for a dealership with excellent reviews, even if another dealership is considerably closer.

Although Baxter’s is doing well, the dealership is aware of the challenges involved in interesting more younger people in motorcycling.

“The manufacturers are aware of the challenges,” Pendergast said. “People have to be able to afford motorcycles, and with student loans and such, there often isn’t a lot of available cash. There is a lot of work now being done on lowering the costs of ownership. That is one of the nice things about Royal Enfield. Anyone can afford a cool looking bike.”

Pendergast also thinks that vintage motorcycles will continue to be popular.

“It’s the cool factor,” he said. “Old British bikes are classically cool. It’s exclusivity — you can have something that not many other people have. It’s pride in ownership — in order to ride a vintage bike, you have to have some mechanical aptitude, and successfully keeping an old bike running gives you a lot of self-esteem.”