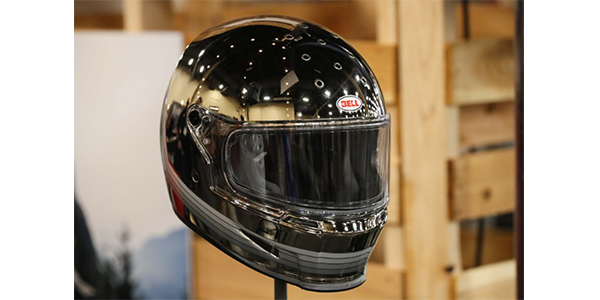 Following an array of new vehicle debuts on Thursday, gear and aftermarket companies were the focal point on Friday, with a diverse range of products introduced to the marketplace.

The second day of AIMExpo presented by Nationwide in Las Vegas featured another full slate of presentations from exhibitors inside the Mandalay Bay Convention Center. Following an array of new vehicle debuts on Thursday, gear and aftermarket companies were the focal point on Friday, with a diverse range of products introduced to the marketplace.

Bell Helmets has remained one of the industry’s most prominent manufacturers of head protection thanks largely to their continued push to be on the leading edge of helmet technology, design and style. That trend continued at AIMExpo presented by Nationwide with the global debut of its all-new Eliminator helmet.

“Born from Auto, Built for the Street,” the Eliminator pays homage to its pioneering automotive helmets, with industry-leading safety standards tailored for two wheels. Its bold and assertive styling, which gives a nod to its racing heritage with a transparent air hose extension, was designed to fit the needs of any rider. It comes in a composite or carbon fiber shell, with ventilation that adds style and functional advantages. To top it all off, the Eliminator includes Bell’s all-new, ECE certified ProVision shield that features proprietary dual pane anti-fog technology.

Simpson possesses some of the most distinctive and easily identifiable aesthetics in the motorcycle helmet industry, with iconic retro designs that are indicative of the early era of racing. At AIMExpo presented by Nationwide, the brand took advantage of the opportunity to showcase the MOD Bandit to the world.

While the external design of the Bandit line has remained relatively unchanged, the innovation behind it has continued to evolve. The MOD, based off the Ghost Bandit, is Simpson’s first modular version for the Bandit line, combining modular function and convenience with the brand’s style and attitude. The new design can function with one hand and provides convenient integration of communication systems while also featuring an internal sun shield.

Fresh off their global launch of the new FTR 1200, Indian Motorcycles used AIMExpo presented by Nationwide to introduce the brand new bike to the North American market. A captive audience eagerly awaited their chance to see the flat-track inspired street bike in public for the first time.

Inspired by the recent dominance of Indian’s American Flat Track squad, the FTR 1200 is aimed at setting a new standard for American motorcycling and takes design and styling cues from the championship-winning FTR750 flat tracker. It’s the realization of the FTR1200 Custom unveiled a year ago that combines race-inspired design and nimble handling with an upright riding position. With 120 horsepower, the FTR 1200 possesses plenty of juice and is accompanied by newly developed Dunlop street tires.

Alpinestars’ debut at AIMExpo presented by Nationwide provided an opportunity for the renowned Italian gear company to showcase what is arguably its most innovative piece of rider protection. While the Tech-Air system has been on the market for nearly a year, it continues to evolve thanks to its race-tested performance from multi-time MotoGP Champion Marc Marquez. To date, well over a half-million miles have been logged on the track with Tech-Air, making it unrivaled as the first integrated airbag system that is completely independent of the motorcycle.

The Tech-Air system comes in both race and street applications, providing virtually every rider the chance to equip themselves with a complete 360 degrees of upper-body coverage, without the necessity of a full set of leathers. The Tech-Air ACU system is completely self-contained and runs off a lithium-ion battery that provides 25 hours of life and features a built-in sleep mode. The system is specially designed to work unobtrusively across a collection of outerwear products.