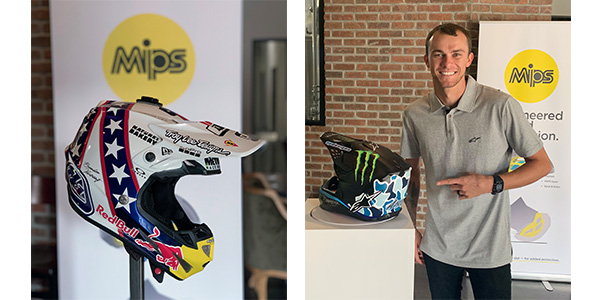 The gathering served as an ideal opportunity to bring together a collection of some of the most important figures in the industry, where MIPS executives educated the group on the science behind the MIPS and provided an avenue for attendees to spread critical awareness throughout the industry and its consumers.

MIPS AB, the Swedish-based innovator of multi-directional helmet protection technology, welcomed several of its partner brands and key members of the two-wheeled media to its first motorcycle safety symposium in Southern California. The gathering served as an ideal opportunity to bring together a collection of some of the most important figures in the industry, where MIPS executives educated the group on the science behind the Multi-directional Impact Protection System (MIPS) and provided an avenue for attendees to spread critical awareness throughout the industry and its consumers.

Chief Executive Officer, Max Strandwitz, and Co-Founder/Chief Science Officer, Peter Halldin, shared insight into what exactly MIPS is, the history of the brand, the technology itself, and its expansive presence across an array of sporting disciplines. More than 24 years of research with the Stockholm Royal Institute of Technology (KTH) and over 27,000 individual tests have helped develop MIPS’ technology, allowing it to become the leading protective ingredient in helmets for the equestrian, cycling, mountain bike and snow sports marketplaces. MIPS is also seeing an increased presence in the sport of hockey, and helmets utilized by construction workers.

MIPS’ endeavor into the motorcycle marketplace is still relatively new, and research regarding protecting riders from traumatic brain injury continues to evolve in an effort to make improvements to the current technology. However, in just a few short years, more than 20 different brands have adopted MIPS as the technology of choice for rotational protection, including world-renowned companies like Alpinestars, Bell, Thor and Troy Lee Designs, each of which were on hand to showcase their newest helmets utilizing MIPS.

“MIPS has become synonymous across a variety of enthusiast-driven helmet sports and our expansion into motorcycling was a natural progression for the technology,” stated Strandwitz. “While we’ve had the privilege of partnering with many of the motorcycle industry’s most recognized and well respected brands, we are still working on bringing awareness to not just MIPS, but rotational protection as a whole. This symposium is a great opportunity to do exactly that.”

The subject of rotational impact protection has become a focal point in the two-wheeled space, particularly in regards to motorcycle racing. That is evident in the new helmet safety standards recently introduced by the Fédération Internationale de Motocyclisme (FIM). These new standards, which currently focus on road racing and will soon expand to include off-road racing, present a groundbreaking period that will push the evolution of helmet safety to not only recognize, but also emphasize rotational protection.

“While many people are now becoming more aware of rotational protection, this is a subject we’ve continually researched and developed for quite a long time at MIPS,” explained Halldin. “As we move forward with our efforts in the motorcycle space, all of the knowledge we’ve gained over the past 24 years has presented us with an opportunity to share that data with significant and influential organizations like the FIM. Our ultimate goal is to ensure consumers around the world are equipping themselves with the most effective helmet protection possible, and new safety standards like the ones now implemented for the world’s premier road racing series are hopefully the first step in that process.”

Each of the attending brands took a turn to speak to the audience, bringing special attention to the newest and most innovative MIPS-equipped helmets available in the marketplace. Notably, Alpinestars featured its Supertech M10 motocross helmet, which was formally brought to market in 2018, and invited motocross champion Aaron Plessinger to introduce his custom-painted design for the upcoming season. In addition to Alpinestars, longtime helmet manufacturer Bell showcased its diverse range of MIPS-equipped helmets, including the Star and Qualifier models for the street, the Moto-9 for motocross, and the MX-9 for adventure riding. Southern California based legacy brands Troy Lee Designs and Thor highlighted their respective models as well, with Troy Lee’s SE4 and Thor’s entry level Sector.

Advertisement
In this article:Helmets, MIPS, symposium