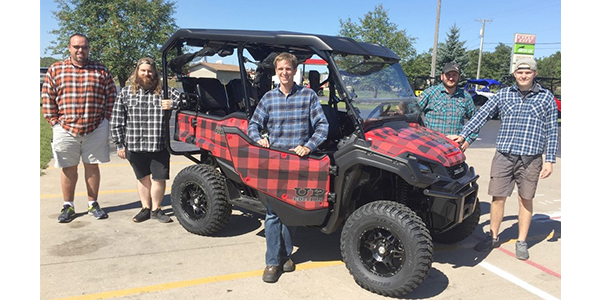 Cycle City’s story began with an ice cream stand in Escanaba, in Michigan’s Upper Peninsula, and is now in its third generation of owners.

Cycle City’s story began with an ice cream stand in Escanaba, in Michigan’s Upper Peninsula, and is now in its third generation of owners.

“It started when my father, back in the mid ’60s, wanted a new Honda motorcycle,” said Eric Malmsten, general manager of Cycle City Inc.  “My grandfather was a car dealer and he said that on his next car-buying trip to lower Michigan, he was going to come back with a bike, but he came back a day or so late.” Upon his return, he emphasized that the Honda products were selling so well, that he couldn’t just buy one bike, he had to get the franchise.

“So, my grandfather took on the Honda franchise and started selling at a used car lot that grew to the point where he needed to build a building and started a Honda motorcycle shop in Menominee, MI,” Eric said.

After working at the Honda dealership for a couple years, Eric’s father Robert wanted to start his own shop. He bought an ice cream stand in Escanaba, MI, and hauled motorcycles from Menominee to Escanaba, which is about 60 miles.

When Robert was ready to retire, he talked Eric — who had spent the last 17 years in the car business — into coming back to take over the family store.

Eric was happy to return to the powersports industry, but knew that although it can be challenging, the car dealership side prepared him for a successful future in powersports.

“I think powersports stores, in general, are about 10 years behind car dealerships,” he said. “To be working for a very progressive auto dealer group, I got a pretty good idea of how a modern-day powersports businesses should run.”

Cycle City is an authorized dealer for Arctic Cat, Honda, Honda Marine, Textron Off Road and Yamaha and has some of the top motorcycles, ATVs, side-by-side UTVs, boat engines, scooters and power equipment for sale. Following industry trends, the most popular new vehicles that Cycle City sells are side-by-sides.

“Although we get a lot of snow in Michigan, snowmobiles really aren’t a big part of our business,” Eric said. “We’re selling about 100 Honda Pioneers a year. So, in comparison, the side-by-sides are definitely where it’s at right now. That’s where the market has gone. Even in the winter months, Pioneers are outselling the snowmobiles. In fact, we sold more dirt bikes than we did snowmobiles this winter because people are ice track racing.”

When it comes to the service department at Cycle City Inc., add-on side-by-side accessories are the most in demand.

“Nobody will buy a side-by-side and just take it the way it is,” Eric said. “Customers want a windshield, a roof, a winch and everything it takes to personalize it.”

Before customers enter Cycle City, they have an opportunity to fill out an online financing application to get a better idea about what they can budget before they walk through the dealership’s doors. Eric said this is especially helpful for out-of-town customers, so it will take less time at the sales desk.

Also helping those out-of-town customers are the dealership’s use of Amazon and eBay sales platforms.

“My brother runs online sales and it has expanded so much that we actually have a separate building now that’s basically just a big shipping and receiving department for our Amazon stuff,” Eric said. “eBay is still pretty small for us, but for Amazon, we’re one of the biggest street bike tire dealers in the country, even though we don’t put a lot on at our store. We’re at a pretty big volume for tires online.”

Not only are the online sales growing, but so is the dealership’s staff. In early June, Cycle City Inc. hired two new salespeople and a new sales and finance manager; all positions in the sales department that were once held by Robert singlehandedly.

“We’ve certainly had a lot of growth in the last year since I got back, and I certainly don’t want to take all the credit for that,” Eric said. “There’s been a lot of things working in our favor. One of our closest competitors went out of business and that helped. We grabbed some business out of what used to be their territory. The economy is really strong right now, so people are buying. The side-by-side trend is certainly growing in popularity and the state of Michigan is actually doing a good job of building trails and changing laws to try to make it more of a friendly thing for tourists to come and ride here. So, there’s a lot of things that have been working in our favor.”t