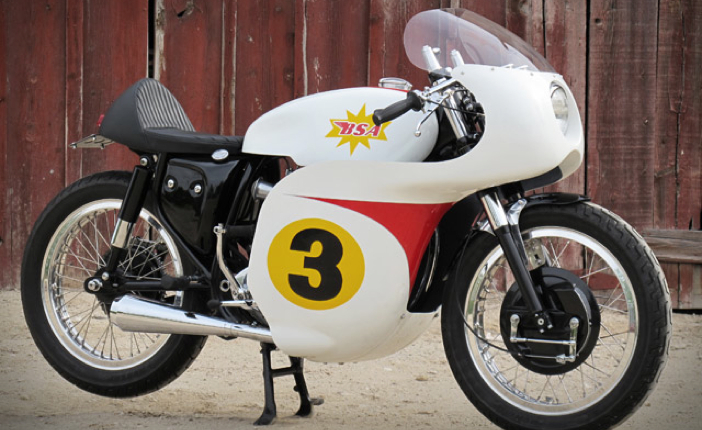 Union Motorcycle Classics builds its redesigned classics in a real, 100-year-old barn in Nampa, Idaho where there is no dust anywhere in sight and nothing is hidden away under tarps. Instead, the “re-imagined” bikes in the barn are new, fresh, exciting and ready to roll! 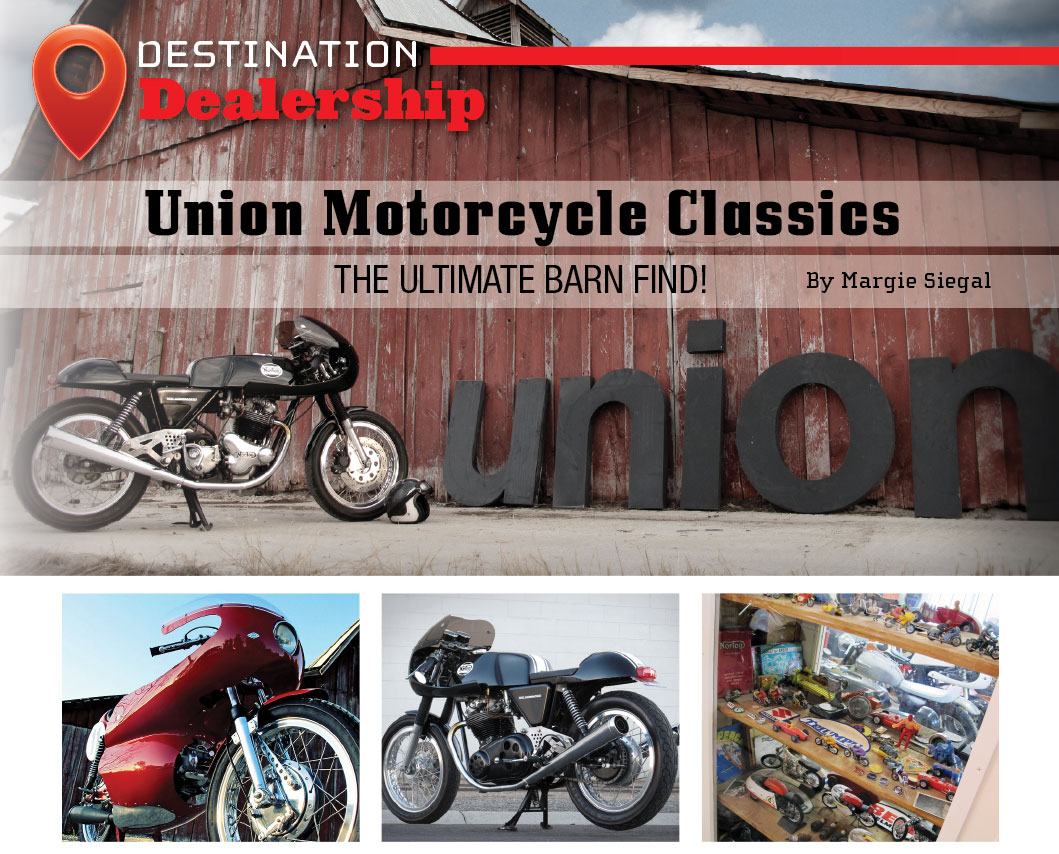 [dropcap]M[/dropcap]any motorcycle enthusiasts have a fantasy of finding a motorcycle in an old barn. Wouldn’t it be great to pull back a dusty tarp to find a 1911 Curtiss or a 1936 Knucklehead or a Vincent Black Shadow, complete and just needing a little work to get on the road?

There is a place where fantasy meets reality, but this field of dreams in not in an Iowa corn field. Union Motorcycle Classics builds its redesigned classics in a real, 100-year-old barn in Nampa, Idaho where there is no dust anywhere in sight and nothing is hidden away under tarps. Instead, the “re-imagined” bikes in the barn are new, fresh, exciting and ready to roll!

Unlike many custom bikes, Union Motorcycle’s creations are intended to perform on twisty roads as well as they stop passers by in their tracks. Mike Watanabe, the owner and designer, says, “I am fascinated by history and race bikes. I want to do my version of what the factory engineer would have done.”

Although his shop is quite small and hidden off the beaten path, Mike’s design ideas are very visible and making a big impact on the motorcycle scene. Union Motorcycle’s creations have been featured in numerous magazines and videos. The shop’s Facebook page has 11,500+ likes – and climbing. Mike has cracked the code of reaching the millennials and builds the kind of custom bikes that appeal to younger, urban riders. The café racer scene is huge, and Mike not only builds top-of-the-line café racers, but his eclectic views on motorcycle design are being adopted in many places.

“For a long time I didn’t like the name, ‘café racer’ applied to my designs,” Mike explains. “I thought – and still think this way – that what I build are street-going race bikes. It’s not that I don’t like café racers. I actually love them. I am just not sure it is the best description of what I see as a Union bike. However, I have come to realize that what I do can be most easily described as café racers.”

Café racers got their name from the gritty Rocker scene in 1960s England. Young people with a little bit of cash from a factory job bought the best motorcycle they could afford and started improving it. Dressed in black leather, they clustered at roadside cafés after work. Impromptu races were started with the drop of coins in a jukebox, the winner getting back to the café before the song was over. “Ton-up” boys rode Triumphs and Nortons with every bit of extra metal removed, low bars and rearsets.

Fifty years later, the café racer look has returned to popularity around young people. Folks with a need for speed and personal expression, but very little money, are now buying older motorcycles and fixing them up. Union Motorcycle’s bikes are an inspiration to these riders. They may not be able to afford a custom Union Motorcycle, but they want to copy the look. 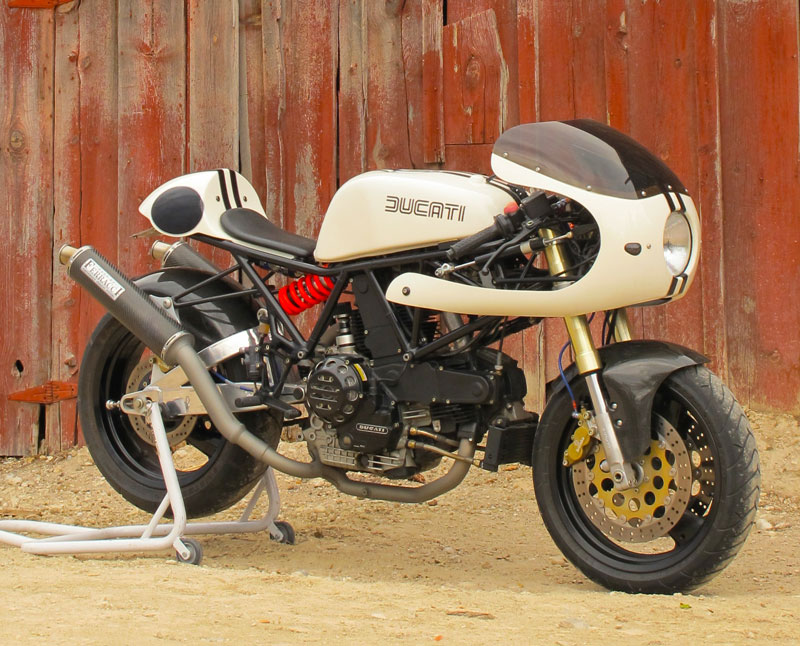 Union is actually Mike’s second motorcycle industry business venture. He started Glass From The Past in 1998 with Bret Edwards. Bret, an automotive technician with experience in molding fiberglass, spent his weekends racing motorcycles – an activity that is hard on fiberglass parts. Locating fiberglass for vintage racing projects was difficult and expensive, and  Mike, with a background in fine art and design, suggested that they could build their own. Mike designed the parts, sculpted the molds and sent them to Bret in Portland, Oregon. After learning how to successfully build fiberglass parts for motorcycles, the pair started selling their output, with the idea of offsetting Bret’s racing expenses. They soon realized there was a very large market for vintage fairings, tailpieces and sidecovers – more than enough for Bret to quit his job and work full-time making and selling fiberglass. Mike continues to design and build molds for what is now primarily Bret’s business. In turn, Glass From The Past makes all the fiberglass on Union Motorcycle’s custom creations.

Glass From The Past also makes fiberglass tanks, both replicas of original tanks and custom designs that pay homage to the classic designers, as well as replica aluminum tanks. Mike explains that a properly built fiberglass tank, sealed with modern gas resistant sealant, will not leak. “The factory tanks were just not sealed correctly.” Since the majority of GFTP’s customers are vintage racers, the tanks have been repeatedly proven under very tough conditions.

Although restoration may be Union Motorcycles’ bread and butter, it is the two to four café racing projects that Mike and Luke take on every year that make the front pages of the enthusiast magazines. Mike notes that they turn down more custom bike projects than they accept. “The first thing is, every piece of the project has to be ours. While we will work on parts of stock bikes, we will not touch pieces of custom bikes. We want to control the finished look of the project. We don’t want to have our name tarnished because of something someone else did.” 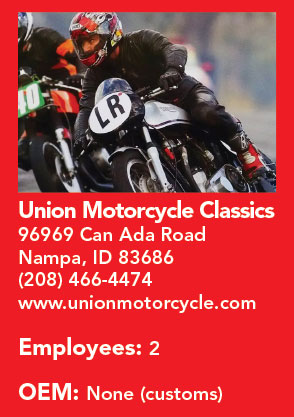 As a first step, Mike will do a design brief and present it to the customer. The customer and Union have to agree on the design, colors and materials before Union will start the project. Mike is serious about sticking to what he thinks of as the factory lineage of a particular motorcycle. A single cylinder Ducati has to look like a special the Bologna factory might have built for the Milan show. A Triumph has to look like a Triumph.

Mike also points out that restorations are easier than custom motorcycles. “With customs, we have to fabricate every bracket, the exhaust system and often parts of the frame. We do not want the finished product to look like the pieces were just bolted on.”
Union Motorcycles’ customers come from every corner of the continent. One build leads to another, as most see Union’s projects in magazines and are impressed. Interestingly, few are prompted to contact the shop via the Internet… print lives!

Mike and Luke’s customers come from many different backgrounds, but most, especially those who want restoration work, are 35 and older. “They want us to find and restore their dream.” Another unexpected fact is that 15-20 percent of the custom bike customers are women. A second significant group of customers are modern bike racers who want a street toy.

Mike is more than a little surprised by Union Motorcycle’s success. Basically an artist, he states that he does what he does for the love of motorcycles. He does not see Union Motorcycles expanding or franchising its operation. “I don’t want our quality to be diminished by quantity.”