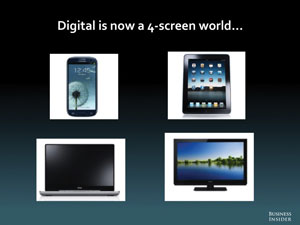 Here comes some digital media fun facts — I am going to fire them at you fast and furious in an effort to allow you walk away from this article a bit smarter, wiser and more focused on the digital space for 2013. If I had compiled this data myself, I would have the distinct right to call myself Wonder Woman … but in truth, I derived this content from BusinessInsider.com, an amazing resource for Internet intelligence led by Henry Blodget.

Digital Media Today
The digital medium is nearing 20 years old (yet I am regularly asked if this Internet thing is some kind of fad). This fact should put an end to the nay-sayers, wouldn’t you think? 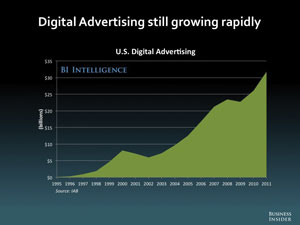 More than 2 billion people are online — but that still leaves two-thirds of the world left to go. Even with those figures, most of the world’s income is online with statistics showing that the top 30 percent of global income earners make up 82 percent of online users.

Smartphone sales blew past PC sales as soon as they were introduced in 2005. Today, tablets are driving all growth in the PC market; led by the release of the first iPad in 2010. Who would even consider buying a laptop over a tablet these days? And what exactly is a “desktop” anyway? The future, no doubt, is mobile.

Online Media Versus Television
Viewing habits are swinging away from prime time television toward recorded TV, video games and streaming online video. Think about your family’s activities. Where do your kids and grandkids spend their time? I am going to guess it’s heads down on their mobile device. 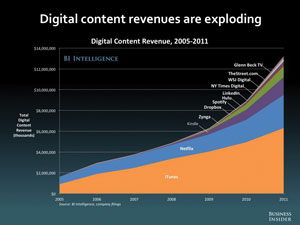 Satellite and cable TV subscriptions are trending steadily down, while “over-the-top” or OTT video has become a real player in the space. OTT includes third party providers such as Netflix, YouTube and Hulu. Live events are increasingly garnering eyeballs with the action being viewed either on televisions or video gaming consoles (all of which are equipped with Wi-Fi).

Digital media advertising is growing rapidly — in fact, at the largest U.S tech and media companies, nearly 40 percent of the revenue is digital. Google now generates as much ad revenue as newspapers and magazines (all of them combined).

Digital media content ad revenue is exploding with iTunes, Netflix and Kindle leading the pack, but keep your eye on Zynga, Spotify and Dropbox (if you haven’t the slightest clue about these companies, this is your cue to get Googling).

However, even with that bright and shiny outlook for digital, TV remains the far and away leader in U.S. advertising spending. It continues to grow, but user behavior is changing. For the moment, TV remains king … but history has taught us that when user behaviors change, the money follows. 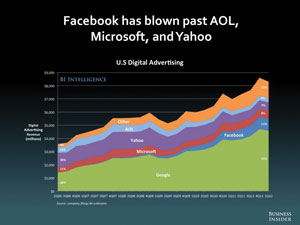 Social Media
It seems that the entire world is on Facebook (humans and pets included!), yet the statistics show only one-seventh of the world’s population utilizes it  — which translates to approximately 500 million daily users and 1 billion monthly users. 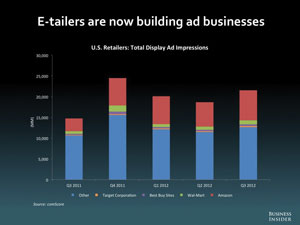 As e-commerce continues to take share, new brands such as Groupon, Gilt Groupe and Living Social blend marketing and commerce. 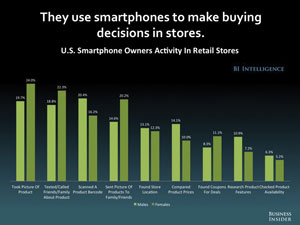 Mobile
When it comes to mobile phone usage, people are using their phones as they do their PCs, spending the majority of their time playing games, surfing social networks, catching up on the news, visiting the bank and shop, shop, shopping. Truth is, the vast majority of the human population is determined to burn up every spare second of its waking hours peddling far away from any form of solitude whatsoever. Good for capitalism, but a bit scary for relationship building and social skill development — such as the all-important ability to make eye contact with your loved ones at the dinner table. But I digress.

Images (mostly “selfies”) fill up our mobile devices, and video is created and consumed at a mind-numbing rate (check out Dude Perfect on YouTube to burn up a solid hour of your life you will never get back — or download his brand new app to impress your friends).

I find one of the more interesting new behavioral habits is the habit of watching television while dialing into a social network on a smartphone. There’s something about this dual viewing activity that our brains crave and many find the ability to interact with others on mutual topics of interest quite satisfying, hence the draw of Twitter. 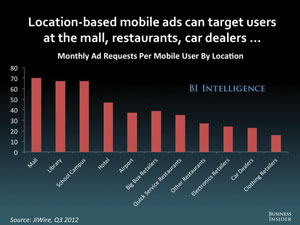 In-store price checking is a technical advance that has changed the way we shop and ultimately make buying decisions. Today’s retail shopper is savvy. He cares about getting the best price or a killer “deal,” and retailers need to bow down to this reality if they are going to survive in this ever-changing climate. Price matching has become core to retail sales strategy with same-day shipping being the latest game changer to be considered by any industry wanting to be a player as detailed by WIRED magazine in “Death by a Billion Clicks.”

Mobile is driving Internet usage through the roof, creating a 24/7 data stream direct to the consumer, so the question is: will mobile ad revenue follow?
The space to watch is localized mobile ads, which allow retailers to reach their core demographic for the lowest of low spend. The ability to target consumers in the digital world is like never before in the history of media, and these savvy consumers are hungry for local offers, deals and information. 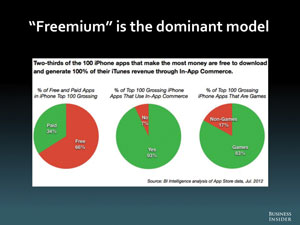 Apps
Apple App store downloads are on track to hit 60 billion by mid-2013, with smartphone users spending more time with apps than mobile Web activity. “Freemium” is still the dominant model, with games being the area generating the most paid app downloads across the board.

Google Android is the leading mobile platform. This is attributed to the fact Android owns China, and the fact that Android is an open platform that is distributed through many phones including Motorola, HTC and Samsung. The Apple iOS platform runs only on the iPhone, iPad, iPod and iTouch, which limits growth potential. 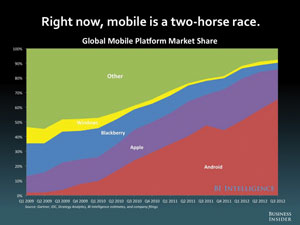 Now that you are armed with a clear perspective on digital media, it’s up to you what you do with this newfound intel. My hope is you will review your marketing budget for 2013 and shift dollars to this growing frontier to allow you to start gathering data on what form of digital media delivers the highest ROI for your business.

The Future of Digital Media