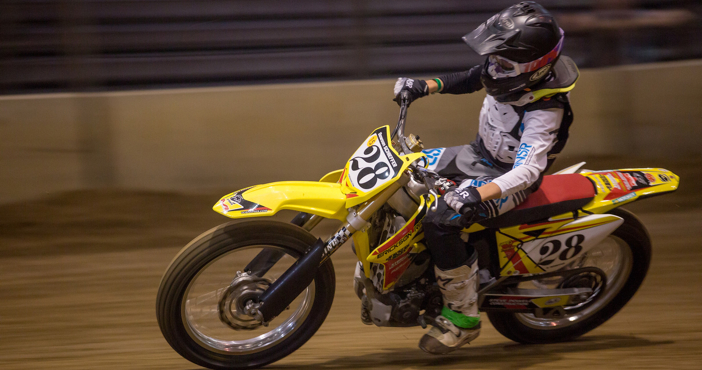 Suzuki Motor of America Inc. will be the title sponsor of the 2016 AMA Dirt Track Grand Championship at the Du Quoin State Fairgrounds in Du Quoin, Ill., July 1-6.

Suzuki Motor of America Inc. will be the title sponsor of the 2016 AMA Dirt Track Grand Championship at the Du Quoin State Fairgrounds in Du Quoin, Ill., July 1-6.
Advertisement
Click Here to Read More
Advertisement
“American dirt track racing has an impressive history, and Suzuki Motor of America is proud of our longtime involvement in the sport,” said Suzuki Communications Manager Steve Bortolamedi. “We are glad to support the 2016 Suzuki AMA Dirt Track Grand Championship. The passion and commitment of these racers is infectious, and it helps motivate Suzuki as we look forward to helping future RM-Z riders compete and earn championships.”
The Suzuki AMA Dirt Track Grand Championship event schedule includes:
Online pre-entry for the Suzuki AMA Dirt Track Grand Championship is now open at www.americanmotorcyclist.com and closes June 26. Pre-entry is $70 per class/per event. Onsite registration is $80 per class/per event.
AMA National No. 1 plates are awarded to the racers in each class who have the highest point totals across all four disciplines of dirt track racing. Additionally, racers compete for the AMA Dirt Track Horizon Award, which honors the amateur racer showing the most promise for success at the professional level.
Awards are also given for the AMA Youth Dirt Track Racer of the Year and the AMA Vet/Senior Dirt Track Racer of the Year. The AMA Fast Brain Award is bestowed upon a racer based upon his or her performance at the event, as well as official school transcripts supplied at the time of application. Applications are available at www.americanmotorcyclist.com.
Advertisement

Daily pit passes are $15 for racers of all ages. Spectator pit passes for those 13 and older are $15. Spectating youth ages 4 to 12 are $10. Ages 3 and younger are free.
Full-week pit pass packages can be purchased June 30 through July 1. They are $50 for all racers and spectators ages 13 and older. Spectators ages 4 to 12 are $25 each.
For more information: www.americanmotorcyclist.com/racing/nationalchampionships/dirttrackgrandchampionship.aspx.
Advertisement
In this article:AMA Dirt Track Grand Championship, Sponsor, Suzuki