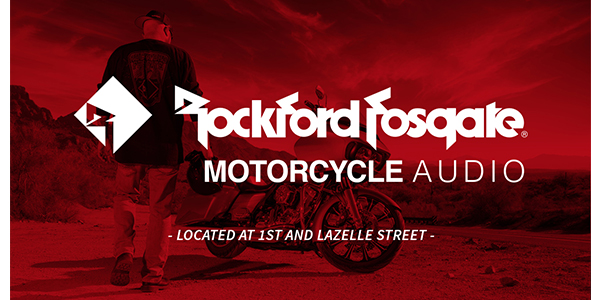 Rockford Fosgate, the industry leader in high-performance audio solutions, announced for the fifth consecutive year that it will be the Official Motorcycle Audio Sponsor of the Sturgis Motorcycle Rally during the 78th annual event from Aug. 3-12. Rockford Fosgate will bring high performance motorcycle audio systems to the crowds of enthusiasts on Lazelle Street in downtown Sturgis, SD, as well as at the Black Hills Harley-Davidson in Rapid City, SD during the rally.

“Rockford Fosgate is fortunate to be welcomed and accepted by the motorcycle community,” said Bill Jackson, Rockford CEO and president. “We are not just happy, but proud to continue as the official audio sponsor of the Sturgis Motorcycle Rally because we believe in giving back to those who have accepted us into their family.”

At its Lazelle Street location (at the corner of 1st and Lazelle Street) from Aug. 3 – 11 (9 a.m. – 6 p.m. daily), Rockford Fosgate will be offering the usual fun and excitement it has become known for in years past, coupled with live audio demos and custom bike builds that will make their official debuts with new Rockford Fosgate motorcycle-specific audio systems.

Rockford Fosgate has partnered with their authorized dealers to perform on-site installations for bikers who will also have the opportunity to purchase Rockford Fosgate audio systems at the Lazelle street location during the event.

Because so many bikers come through Rapid City, SD, on their way to Sturgis, Rockford Fosgate will also be stationed at the Black Hills Harley-Davidson from Aug. 1 – 11 (8 a.m. – 8 p.m. daily),  where bikers can purchase Rockford Fosgate audio systems and have them installed on-site, as well.

“We will have our personnel available at both locations during the rally to answer any questions and help bikers choose the perfect systems for their rides,” Jackson said. “This will include our new 5×7 Power Series TMS57 bag lid audio speaker.”

The Rockford Fosgate TMS57 speakers are specifically designed for Harley Davidson Boom! Audio and Boom! Audio Stage 1. The TMS57 Element Ready, purpose-built bag lid speaker upgrade solution is designed to perform even in the often-harsh environments motorcycles are subject to out on the open road.