Moto Guzzi has announced its lineup for 2015. Starting in September, dealers will be receiving 2015 Moto Guzzi V7 Stone and V7 Special models, along with the new Moto Guzzi Griso 1200 8v SE. 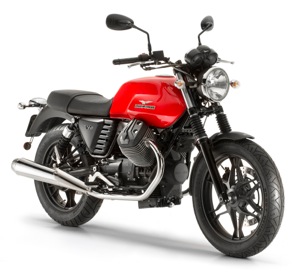 In 2015, the V7 Stone receives a make-over, enhancing its minimalist nature, transforming the chrome plating into black, with the exception of the engine, which retains the chromatic tones of the metal alloys and shine of the exhaust system. The rest of the motorcycle, from the mirrors and shock absorbers to the mudguards and side panels, is updated with a complimentary dark tone, in a triumph of black. 2015 will expand the V7 Stone to three colors, each with a distinct expression of personality: sporty in the new gloss-finish “Rosso Corposo”, aggressive and in the militaristic satin-finish “Verde Agata”, and the sophisticated, yet stealth in the returning ever- popular “Matte Black”.

The V7 combines the best elements – reliability, style, and soul – with no shortage of eye-catching when parked, and an excess of smiles when riding. The 750cc, 90° V-twin engine is powerful and stays true to the characteristics of the Moto Guzzi tradition, that touring on a motorcycle at its most pure should be nothing but enjoyable. With a 5.8 gallon metal tank, there will be no problem eating up miles, taking pleasure with improved engine functionality – greater torque and power even at low RPMs – making the V7 more efficient, with higher fuel economy and reduced emissions.

If there are few aesthetic details that betray their classically-inspired nature, many are the advantages of technological evolution: the Moto Guzzi V7 can cover over 250 miles with a tank of gas, requires limited service every 6,200 miles, has a maintenance free cardan shaft drive, and in 2015 an update to a new wet flywheel, replacing the previous dry alternator, slightly modifying the front of the 90° V-twin, thanks to a more compact and sleeker new cover. 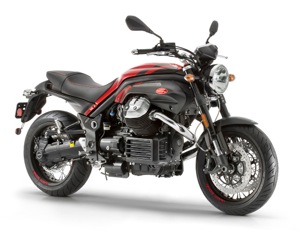 The Moto Guzzi 1200 8v SE is an instinctive and boldly characterized machine – perhaps one of the most beguiling motorcycles in Moto Guzzi’s 93-year history. Its character is expressed in the non-conformist styling, which flows throughout the bike, from the frame and wheels to the steering plates and instrument panel covers, and ultimately through the exhaust – roaring like a P-51 Mustang. With a 1200cc 90° V-twin, fully adjustable suspension, and wide bars, the Griso is a thrill to ride, and an object of envy to look at – so much so, one wouldn’t need to travel so far from Mandello del Lario to find imitation.

The Moto Guzzi Griso is picture of masculinity and power, and with the new 2015 updates the expression is only visualized further. The new Rosso Trophy color conveys two fundamental elements that are at the base of Moto guzzi heritage – elegance and sportiness. Among the detailes that make it an authentic custom-built are the saddle red lining, matching red thread double-stitching, and the ever attractive spoke wheels with custom channels in Moto Guzzi red.