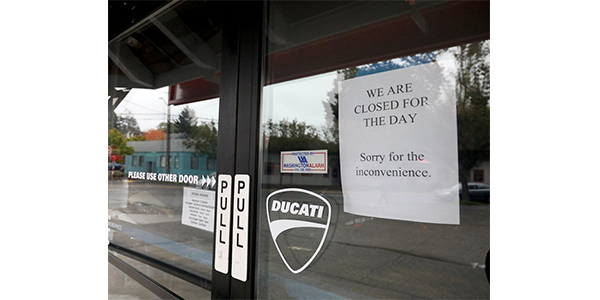 In a report by The Seattle Times, five Seattle-area motorcycle dealerships, including BMW and Ducati, were closed by their owner, a Microsoft executive and avid motorcycle racer.

In a report by The Seattle Times, five Seattle-area motorcycle dealerships, including BMW and Ducati, were closed by their owner, a Microsoft executive and avid motorcycle racer.

“On Thursday, Sept. 19, workers at the five NobleRush dealerships — a joint BMW-Ducati-KTM location at 8100 Lake City Way in Seattle; a Ducati dealership in Redmond and two multi-brand dealerships in Auburn — learned that the businesses had been closed indefinitely, according to former employees, the previous owner of one of the dealerships, and social media posts by customers.

“‘The doors are closed until further notice,’ a former employee confirmed Monday morning. There were also reports over the weekend that motorcycles were being removed from several of the shuttered dealerships.

“The dealerships’ owner, Microsoft group program manager Howard Crow, couldn’t be reached for comment. A search of local court records found no related lawsuits or liens against Crow, or any bankruptcy filings.

“The closures shook the local motorcycling world. ‘I cannot stress enough how huge a hit this is for the Seattle motorcycle community,’ said Keith Thye, whose wife, Ann Thye, sold Crow the Seattle BMW dealership in 2015.

“’Dealers come and go, but to have five go down all in one fell swoop is unheard of,’ Thye said, who was president of the dealership before the sale to Crow.”