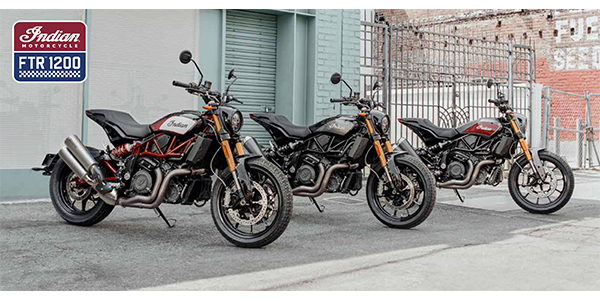 Indian Motorcycle announced the FTR 1200 and FTR 1200 S will begin arriving in dealers in the U.S. and Canada in mid-May.

Indian Motorcycle announced the FTR 1200 and FTR 1200 S will begin arriving in dealers in the U.S. and Canada in mid-May. All factory accessories, including the Tracker, Sport, Rally and Tour Collections, will also be available as motorcycles arrive in dealerships.

Inspired by Indian Motorcycle’s storied history and success in flat track racing, the FTRTM 1200 and FTRTM 1200 S take design and styling cues from the championship-winning FTR 750 purpose-built race bike and the one-off FTR 1200 Custom to deliver a flat tracker for the street. The platform proudly breaks new ground for an American motorcycle manufacturer and answers the call of enthusiasts around the world anxiously awaiting its debut.

Each model combines race-inspired design and nimble handling with an upright riding position to create a commanding ride. The new platform is a key component in Indian Motorcycle’s broader mission to expand its global appeal and reach new riders.

The new platform underwent extensive development and testing to ensure it meets Indian Motorcycle’s high-quality standards and performs at the highest levels. The platform accumulated over one million miles of simulated ride testing and tens of thousands of test miles on the street with input from racers, including former Grand Prix riders and Indian Motorcycle’s championship-winning Wrecking Crew flat track race team.

The FTRTM 1200 and FTRTM 1200 S are propelled by a powerful new liquid-cooled 1203cc V-Twin engine making approximately 120 horsepower and 85 ft.-lbs. of torque.

A flat torque curve ensures a progressive, predictable power delivery with loads of low-end punch and flexibility. The engine features a 12.5:1 compression ratio, high flow cylinder heads, and dual throttle bodies for optimal airflow and power. Additionally, the engine covers make wide use of magnesium to reduce weight and utilize a low-inertia crankshaft that allows the engine to rev to its redline quickly for thrilling acceleration.

The fuel tank on FTRTM 1200 and FTRTM 1200 S is strategically located under the seat to make the bike feel more compact and give it unmatched agility. This design centralizes the mass, lowers the center of gravity and allows for an optimal air box placement directly above the engine. Fuel capacity is 3.4 gallons.

Similar to the FTR 750 race bike, the airbox on the FTRTM 1200 and FTRTM 1200 S is placed directly above the engine to optimize airflow and maximize power. Each bike’s intake features Dual Mikuni Throttle Bodies and Electronic Throttle Control.

The FTR utilizes a similar rear suspension and swingarm design as the FTR 750 race bike, with a tubular steel construction and a side mounted monoshock with 5.9″ of travel to ensure maximum grip and compliance. The swingarm pivot attaches to the engine’s crankcase in order to keep the wheelbase more compact, while a hollow rear axle helps reduce weight. The FTRTM 1200 features a monoshock with preload and rebound adjustments, while the FTRTM 1200 S features a monoshock with an aluminum piggy-back reservoir that is fully adjustable for preload, compression and rebound.

To further follow the style and design of the FTR 750, Indian Motorcycle worked with Dunlop to create an all-new flat track-inspired street tire that is exclusive to the FTR. Modeled after Dunlop’s DT3 flat track race tire,
the DT3-R on the FTRTM1200 and FTRTM 1200 S are modified for the street – featuring closer tread blocks, a shallower tread depth, and additional silica to increase grip and improve wear. Both the FTRTM 1200 and FTRTM 1200 S feature 19-inch front and 18-inch rear light weight cast aluminum wheels.

Riders looking to upgrade their exhaust can select between a low and high mount Akrapovic slip-on exhaust that enhances the sound and style.

Flat track-styled ProTaper aluminum handlebars further add to the styling of the bikes. Conveniently located handlebar controls allow the rider to control all features within the FTRTM 1200 S’s Ride Command touch screen system without taking their hands off the handlebar.

Both models feature full LED lighting, including a new high output headlight to improve visibility. The Indian Motorcycle Script running light provides an unmistakable face for the bike. Cruise control comes standard on both models to ensure a comfortable ride.

The FTRTM 1200 S features a host of additional ride enhancing technologies to let riders further customize the bike to their riding style. It features stability, traction and wheelie mitigation control with an inertial measurement unit that allows for lean angle sensitive adjustments to these systems to provide more control and confidence. Riders on the FTRTM 1200 S also have the ability to disable ABS.

The FTRTM 1200 features a 4-inch analog gauge with a USB fast charger that lets riders quickly charge mobile devices. The FTRTM 1200 S features an all- new 4.3-inch Ride Command LCD touchscreen display with high visibility and contrast so it’s easy to see in any lighting condition. The display includes Bluetooth and a fast charge USB port so that riders can easily pair mobile devices and control their phone and music from the display. The display is customizable so riders can select a variety of configurations for the bike’s speedometer and gauges.

Indian Motorcycle: FTR 1200 to Arrive at Dealerships in May