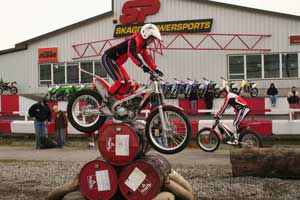 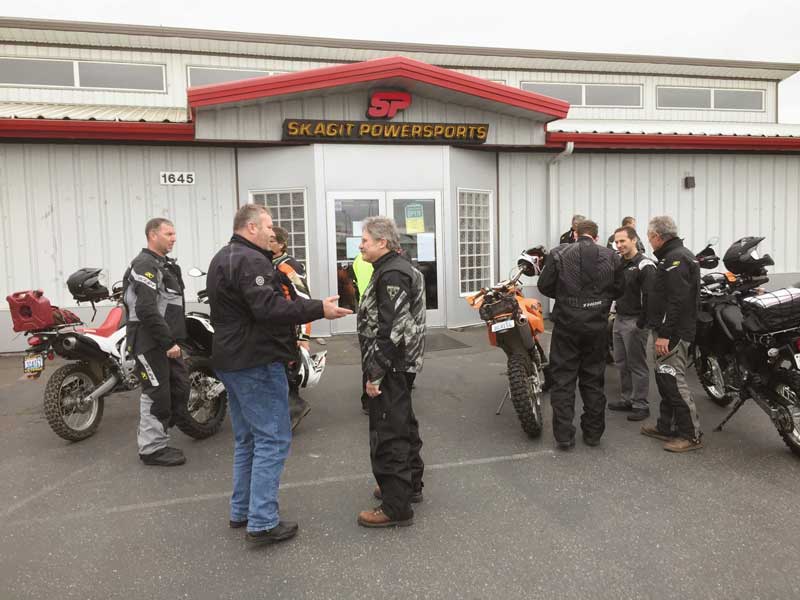 [dropcap]G[/dropcap]ary Lawyer, Bill Cameron and Pete Bangs bought Skagit Powersports in 1992, and soon started putting their innovative retail concepts into place. The thinking-outside-the box ideas of the three owners have caused Skagit Powersports to receive multiple industry awards, including Pro-Yamaha Sports Specialist. Skagit is one of only 25 dealerships to receive this award in  the United States.

Starting out as a small Yamaha dealership, Skagit has expanded to sell Suzuki, Kawasaki, Kymco, KTM, Ducati, Gas Gas (a hand built trials bike from Spain – Gary Lawyer is a National trials champion), Oset (electric dirt bikes for young riders) and Husqvarna, while retaining and growing the Yamaha franchise. In 1996, after only four years in business, Skagit moved to a 14,000 square foot building, and has expanded considerably since then. How does Skagit do it?

A great location helps any retail business, and Skagit Powersports is right in the middle of one of the better riding areas in America, Northwestern Washington, with the San Juan Islands to the west, the Cascade Mountain Range to the east and spectacular British Columbia just an hour north. Seattle’s booming economy is a little over an hour south. Work opportunities in the area provide Skagit customers with the money to support a motorcycling habit, while the surrounding terrain provides every incentive to ride.

The first concept at Skagit was to have knowledgeable people in all sales and service positions. When a customer calls, someone who knows what they are talking about answers the phone. Skagit is one of the few dealerships with a near-perfect rating on Internet rating services, and a major reason is customers’ telephone experiences.  Customers consistently state that they can call Skagit, describe a needed part and the right part will be there when promised. Service requests go smoothly, with parts to perform the service on hand when service is scheduled. “On time and on budget” is a consistent report. 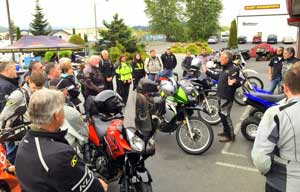 In case people prefer the experience at some other dealerships where customers get blank stares and no one takes responsibility for anything, they can be directed to the aquariums all over the Skagit dealership, displaying several different turtle varieties. The head turtle and mascot is Baxter, who excels in slow moving nonchalance, ignoring customers and not answering questions.

The second concept was to make Skagit a popular destination in itself. The most famous Skagit sponsored event is the Monkeybutt 300, an all-day sportbike event that has attracted up to 175 participants, but there is something going on at Skagit several weekends a month, year round.

“This weekend, we are having an adventure ride a couple hundred miles up in the mountains, then a barbecue at the dealership and a tech talk,” says Bill Cameron, who claims that his title is Entertainment Director. “Next weekend, we will be having our dyno shootout. We are lucky enough to have a dyno in an accessible area. Instead of trying to advertise our extra service capabilities, we decided to have a contest. We encourage clubs and groups to show up. We see who enters and arrange categories – best 50cc scooter and best air cooled pre-1980 bike, for example – so we can give out a lot of prizes,” says Cameron. “We announce winners on Sunday. It’s very popular.” Winter events include swap meets, chili cookoffs and a manufacturer-sponsored helmet
fitting workshop. 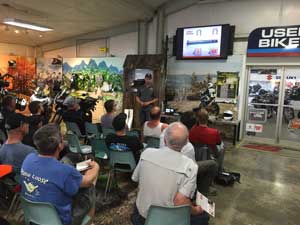 “Making our dealership a community center is not a new idea, but it works,” says Cameron. “At first it was a lot of effort, which is why a lot of dealerships don’t do events. I keep a file on each event, and now I just have to make six phone calls and it’s done. It keeps customers loyal and interest in the dealership high.”

The Skagit website is part and parcel of the community hub focus of Skagit. Customers regularly visit the website for entertainment and information. How many dealers post a list of local restaurants on their website? A video of a horse walking into the dealership? (the sales department tried to sell her a 4×4 but couldn’t verify her credit) An informative article on how to avoid accidents? The Skagit website is also the place to go for information on all of Skagit’s events, and features shopping specials, finance forms, a parts request form, and a service request form.

The third concept was to encourage dual sport riding and off-road touring, since there are many opportunities for this type of riding in the area. Skagit hosts an Adventure Center, managed by the president of a local motorcycle club. The Center features events, rides, suspension upgrades and tuning, and sells hard to find parts, luggage, tires and clothing for dual sport and adventure riders.

The fourth concept was to make a special effort to cater to women riders and passengers. Women are an integral part of the parts and sales team at Skagit – the sales manager is a woman. Women are welcomed as customers, encouraged to post their stories on the Skagit website and provided with resources, including links to women’s riding groups and online information. Since women are now 12 percent of riders and influence at least a quarter of motorcycle buying decisions, making women comfortable at Skagit has a very positive influence on the bottom line. “We have all sorts of women coming to us – housewives to F18 pilots from the nearby airbase,”
says Cameron. 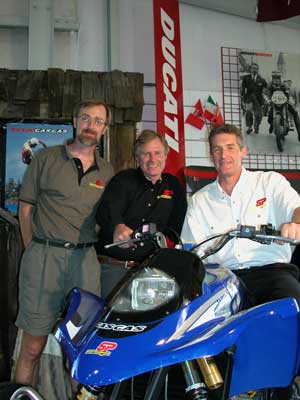 The fifth concept was continual investment in rider training. Bill Cameron has invented a closed course event he calls, “Get to Know Your Bike Day.” Skagit rents a track and brings in instructors to help riders of all types of bikes and all levels of experience increase their riding ability on their own bikes. Attendees turn up on everything from Gold Wings to small dual sport bikes. The return in customer gratitude is excellent, but the major aim is to increase customers’ comfort on motorcycles so that they will both ride safely and continue to ride. Skagit also posts rider education class schedules on its website and the Adventure Center features seminars and schools for dual sport and adventure touring riders.

As a result of these five concepts, Skagit is not only a profitable business, but also a place where people want to come to work most days. “What makes me happy is seeing people find enjoyment in riding motorcycles and bringing them into our Skagit family,” says Bill. “People who come to us are more satisfied. We try to build value into every encounter.”