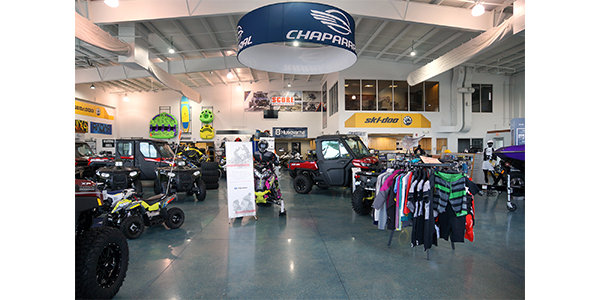 One of Higbee’s dreams was to combine the three operations under one roof where people could shop for powersports and marine products at one location.

Don Higbee is living the dream. Like Kevin Costner’s character in Field of Dreams, Higbee has built it, and now the customers are coming in. Originally from Waukesha, WI, he retired from a successful career as a software executive and moved to Casper, WY, 15 years ago. In 2007, Higbee purchased Driven Powersports, Destination X and Driven Marine. These three operations now comprise one of the largest powersports businesses in Wyoming.

One of Higbee’s dreams was to combine the three operations under one roof where people could shop for powersports and marine products at one location. When a former car dealership became available on the east side, Higbee jumped at it. With his wife Karen by his side, daughter Stephanie and his extended family of long-time employees, they made the move to the new Driven Powersports & Driven Marine location at 6351 E. 2nd St. in Casper. This location provides plenty of parking and easy access from local arterial roads and interstate 25.

The transition to a destination dealership has made it possible for Higbee and his wife to chase some of their other dreams, actively pursuing their family interests of recreational snowmobiling, power boating, traveling and racing. During the past two decades, Higbee has been an avid competitor in everything from BMX to personal watercraft. However, his greatest success has come from competing in quad racing. His track record includes winning a GNCC Championship as 4X4 Senior and racing the Pro ATV Class in the SCORE desert racing series, including the infamous Baja 1000. In fact, Higbee was one of only two racers to tackle the Baja 1000 as an “Ironman” entrant on a 4X4 Quad — 922 miles solo on a quad running down the Baja California peninsula.

Higbee has refined the art of racing quads after four decades in the saddle. This 50-year-old senior rider continues to show the kids how it is done in GNCC/desert and endurance racing. As he says, “youth and energy are no match for age and experience.”

While he is happy to show the kids his dust, he does keep some things to himself. We can’t tell you all the secrets of his success, but Higbee is willing to share some of the basics. “Kenda tires and OMF wheels are the hot ticket,” he explains. Sponsors for Higbee’s 2017 Can-Am Outlander 1000R include Can-Am and Driven Sports Racing. Modifications consist of a frame by David Jesse Racing, Custom Axis shocks, Run Flat System by Tire Spines, Yoshimura exhaust, clutching courtesy of Air Dam Clutches, Evans Coolant, DP Brakes, Fasst Flexx handlebars, Quad Boss tie rods, Spider Graphix and Rigid Industries lights.

If you dream about racing, powersports or boating head to Casper’s version of Field of Dreams, Driven Powersports, give Higbee a call at (307) 237-7680 or drop by the store. If Don is not available, Barry or Ty will be more than happy to take care of you.