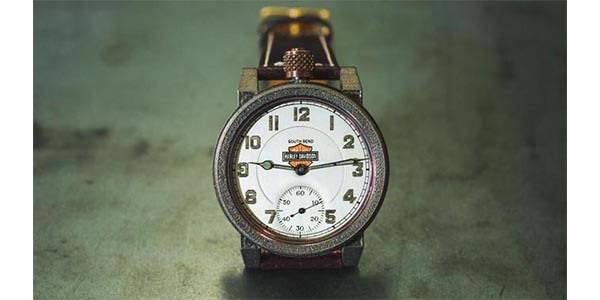 The Colorado-based Vortic Watch Company recently completed the manufacture of a unique wristwatch using an original, one-of-a-kind 1920 Harley-Davidson pocket watch. Partnering with the National Watch and Clock Museum in Pennsylvania, this one of a kind Vortic timekeeper will be auctioned with the proceeds benefiting the ongoing mission of the museum.

“Every watch we make is one-of-a-kind,” said R.T. Custer, co-founder of Vortic Watch Company. “This watch was so special, so unique and had such a classic American story, that we just had to honor and celebrate its heritage in some way.”

The one of a kind watch has been constructed using the original movement (mechanism), dial (face),= and hands from the original antique pocket watch. The dial features the Harley-Davidson Logo along with the brand of the original pocket watch manufacturer, South Bend. Everything inside the watch was manufactured in 1920 in South Bend, Indiana. South Bend was one of the great American watch companies, and manufactured thousands of pocket watches, but only a few were customized like this one.

The watch’s antique movement was recovered from a long-discarded pocket watch, and had in fact been “orphaned” from its original case. Vortic specializes in the rehabilitation of such movements, turning them into one of a kind wristwatches that can be worn and enjoyed. Vortic procured the original movement, dial and hands at an auction, along with many other orphaned movements from the same time period. They then meticulously restored it using only original parts, and manufactured a modern wristwatch case for it, using their trademark 3D-printed titanium engineering system.

Historians and collectors have speculated that the original pocket watch might have been made for a Harley-Davidson dealership as a special piece for a valued customer. Another theory is that it may have been altered by the original owner who was likely a Harley-Davidson fanatic. Regardless of the original provenance, it is an iconic piece of American history, and owing to this, Vortic has decided to auction the piece to benefit one of their favorite causes, The National Watch and Clock Museum.

“We love partnering with Vortic Watch Company because we share a similar mission: preserving American horological history,” said Tom Wilcox, CEO of the National Watch and Clock Museum. “Their watchmakers and engineers in Colorado did a fantastic job preserving this movement and we’re excited to find it a loving home.”

The online charity auction for the watch will begin on Nov. 8, on the National Association of Watch and Clock Collectors’ eBay page. To be alerted of the auction start, and to learn more, visit VorticWatches.com/Harley. Harley-Davidson owners can also learn more by reading the feature in HOG Magazine, the Harley-Davidson Owners Group official and exclusive publication.

The watch will be on display in New York City at the Windup Watch Fair by Worn and Wound Nov. 2-4. Learn more at windup.wornandwound.com.

NoSweat is Changing the Way the World Sweats