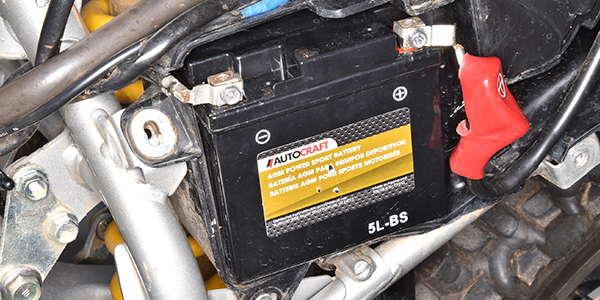 Don’t just jump in and replace a cylinder head or ECU. Getting fixated on a singular solution and throwing parts at a machine is wasteful and amateur. Be a professional and understand the cause of a problem before a blind repair attempt. Start with the vitals.

When a motorcycle or ATV rolls in the shop for service work, don’t just dive right in after what a customer thinks is the problem. Start with a good baseline look at what you’re working with. When a patient comes into a medical clinic, the nurse doesn’t begin with surgery. Baseline vitals is where everything starts.

Don’t just jump in and replace a cylinder head or ECU. Getting fixated on a singular solution and throwing parts at a machine is wasteful and amateur. Be a professional and understand the cause of a problem before a blind repair attempt. Start with the vitals.

Is the battery sufficiently charged? A weak battery can throw off many additional checks and diagnostics. Don’t make a customer pay for a fuel pump replacement because you’re mentally pigeonholed that the fuel pump is the issue. All diagnostic tests should be done with a fully charged battery.

Compression checks are a must, and leak down tests can reveal more information if you have the equipment. Before splitting the crankcases to replace a transmission shift fork, you need to know the status of the top end. It is much easier to know ahead of time that cylinder No. 2 has low compression and its components need to be inspected in detail.

Inspecting the oil level, condition and pressure are all very important. Every experienced technician has seen a few machines where the owner claims to change the oil at or better than the recommended maintenance schedule only to see a pathetic amount of burned up nastiness actually dribble out. If a part failed due to lack of lubrication, it’s not enough just to replace the part. Why did the oil not reach the part sufficiently? Was it just neglect or is there a leak or a clogged oil passage waiting to cause further trouble?

When testing electrical components be sure to follow the manufacturer’s instructions in order. For example, most service manuals advise that you make sure the electrical connectors are clean and in good condition before you begin electrical testing. Getting trigger happy and replacing electrical parts is a rookie mistake frequently made by technicians who should know better.

A friend of ours took his Honda CBR600RR to a local shop. The bike was experiencing intermittent headlight failure, ignition cut-outs and starting problems. The local shop technician replaced the regulator/rectifier, several relays and fuses without success. He swapped out the ECM, but all of this did nothing but run up the repair bill. Out of frustration, our friend picked up his bike and brought it to another shop, which quickly solved the problem. Why the difference between shops?

Uncle Bob, the technician who fixed our friend’s CBR600RR, didn’t throw parts at it or do a dance and sing it the magic Honda song. He followed the Honda manual and checked out the wiring harness until he found a poor ground. The problem was resolved without any new parts. Incidentally, the shop who failed to fix our friend’s CBR is no longer in business while Uncle Bob’s employer just added their sixth OEM franchise.

Start with the basics. Be a real professional like Uncle Bob. Don’t waste your time and your customer’s money by blindly throwing parts at a problem. Be methodical and don’t get fixated on a part replacement philosophy. Remember to follow the steps in the service manual.

Diagnostic Procedures for Harley-Davidson Brake Systems
Connect with us