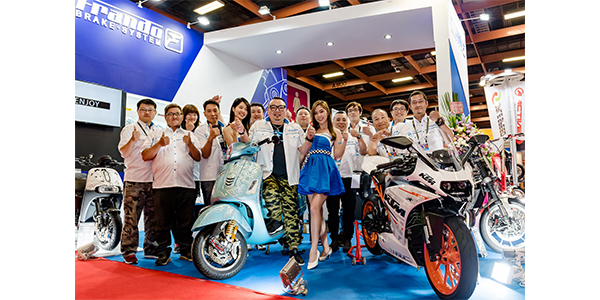 Organized by the Taiwan External Trade Development Council (TAITRA), the Motorcycle Taiwan show has quietly become one of the key trade events in the region during the past decade. Originally, a handful of aftermarket electronics specialty manufacturers and the island’s OEMs came together to present their wares to international buyers. The addition of consumer days and a shift in focus on the export business opportunities in the region and the U.S. has not only broadened the scope of the event, but also increased attendance in recent years.

The overall event is actually five shows in one with AMPA (automotive parts and EVs), AutoTronics and Taiwan ITS (Intelligent Transportation Show) at the Nangang Exhibition Center and the Taiwan Car Tuning and Motorcycle Taiwan events being held in the Taiwan World Trade Center Exhibition Hall 1.

The motorcycle portion of the show kicked off with presentations headed by TGB President George Lin, keynote; at the invitation of TAITRA President and CEO Walter M.S. Yeh, a state of the U.S. market report from Dave McMahon from PSB and myself; and Kelvin Chu, VP of InfoTradeMedia (AIMExpo’s agent in Taiwan) presented details on the Taiwan Pavilion coming for the October show in Las Vegas.

So how does Motorcycle Taiwan compare to AIMExpo? Quite favorably actually, there were 136 exhibitors (including 16 international firms) filling 406 booths in Taipei versus 487 booths in Columbus, Ohio last September. There is also a consumer component to the show, which helped bring more than 38,500 attendees through the two venues (they didn’t split the total attendance out between AMPA and Motorcycle, but the crowd of consumers was solid).

In addition to journalists covering the show, there were over 450 American visitors. While many of them were focused on the EV and auto sectors, we did see Tucker Rocky VP of purchasing and merchandising, Charlie Hadaiya Jr. and a couple of PLMs canvassing the aftermarket manufacturers.

The trade days drew buyers from Japan, mainland China, Malaysia, Korea, Thailand and the Philippines in the greatest numbers but we also ran into our Australian friends from Rocky Creek Designs.

“There are some really good ideas presented here and we are always on the lookout for new innovations,” said Janice Jansen from the New South Wales motorcycle accessories firm. “Just don’t tell anybody about our secret showcase.” Sorry, Janice, but the cat is out of the bag! There is definitely some cool stuff to be found at this show.

One of the good ideas our hosts from TAITRA wanted to call attention to included the nitride graphite cast iron piston rings from Japan Jco-N.

“EV may be the vehicle of the future, but in the meantime, there will be millions of internal combustion engines in use for decades,” said Vice GM Tony Chen. “Optimistically 50 percent of the total number of vehicles on the road will be EV by 2040.” In the meantime they have a better solution: piston-ring.japon.com.tw.

Another innovator coming to AIMExpo from Taiwan is the crew from Sean Horng Enterprise. After making headlights, forks, handlebars and forward controls for some well-known builders since 1975, they are out to make a name for themselves, according to Ting Yang, who runs the show with her brother and uncle. If you can’t wait for AIMExpo, check them out online: yeanhorng.com.

The 14th Taiwan International Motorcycle Industry Show is already set for April 25-28, 2019. Interested in exhibiting or visiting, check with TAITRA. Or visit motorcycletaiwan.com.tw/en.