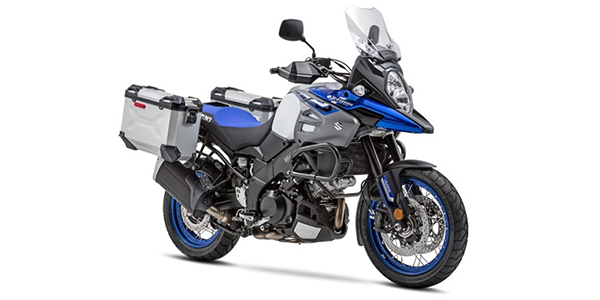 As the American International Motorcycle Expo presented by Nationwide begins in Las Vegas, Suzuki Motor of America continue its six-year commitment to the expo by showcasing its full 2019 model lineup. This exciting group of models includes the all-new RM-Z250 motocrosser, kid-friendly DR-Z50 mini, café racer inspired SV650X, the GSX-R Supersports that own the racetrack, plus the adventure- and tour-ready V-Strom XT motorcycle family.

Industry enthusiasts have the opportunity to get a first-hand look at these stunning bikes and the rest of the 2019 lineup for its first public display at the Suzuki booth, each day of the show. While being immersed by the “sea of handlebars,” attendees are also be able to enjoy Suzuki-related activities in and around the display, including rider autographs, exclusive rig tours, “Suzuki Sunday” presented by ECSTAR, the team VIP wrap-up party and more.

Media and fans alike can engage with Autotrader/Yoshimura/Suzuki and Yoshimura/Suzuki riders during the two trade-only days and throughout the consumer filled weekend. Two-time 450 Supercross champion, Chad Reed and one of the most consistent and hardworking riders in motocross, Weston Peick will be in attendance to interact with fans. Roadracing fans will be able to visit with Roger Hayden, who recently announced his retirement after 20 seasons as a professional racer, and his Yoshimura teammate, Toni Elias, the 2017 MotoAmerica Superbike Champion.

Concurrent with the AIMExpo, Supercross champion, Reed, will contest at the Monster Energy Cup Saturday night on the championship-winning and upgraded 2019 RM-Z450. While watching Reed rip the track, keep an eye out for the all-new RM-Z commercial that will debut on the Sam Boyd Stadium jumbotron as well as in the TV broadcast.

Stop-by the booth for “Suzuki Sunday” presented by ECSTAR on the final day of the show to end the weekend with a Suzuki state of mind. Join fans, enthusiasts, industry leaders, factory riders and more for a final picture, autograph and “congrats” with Roger Hayden as the Suzuki family sends him off into retirement with a “bang.”