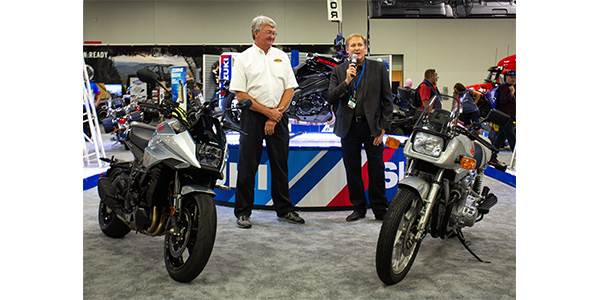 The presentation coincided with Suzuki’s return of an original 1982 GSX1100S Katana, which the company had borrowed from the museum to support the new version’s U.S. arrival.

On the opening day of AIMExpo in Columbus, Ohio last Thursday, Suzuki Motor of America, Inc. (SMAI) presented the Barber Vintage Motorsports Museum with a new 2020 KATANA sport motorcycle. The presentation coincided with Suzuki’s return of an original 1982 GSX1100S Katana, which the company had borrowed from the museum to support the new version’s U.S. arrival.

“It’s been an honor having Barber’s 1982 Katana with us for the yearlong celebration of the new KATANA,” said Kerry Graeber, Suzuki’s vice president of sales and marketing. “The original Katana truly is a legend in motorcycle history and set the stage for modern design, technology, and performance. Being able to showcase a pristine, perfect Katana alongside the all-new model was an idea we had and we greatly appreciate that our friends at the Barber Vintage Motorsports Museum helped us achieve that vision.”

Graeber added that hundreds of thousands of enthusiasts have seen the two bikes together since they debuted at the Long Beach International Motorcycle Show last November.

Graeber presented Jeff Ray, executive director of the Barber Museum, with the new KATANA in the model’s traditional silver livery to permanently display in the Alabama museum alongside the original. Ray also received a die-cast model of the original Katana, and a poster that that was created specifically for the museum and pays homage to both the original and all-new model.

Suzuki also showed the new model in Solid Black for the first time in the U.S. at AIMExpo showcasing its bold and significant styling. Both colorways will be available in dealers this November at an MSRP of $13,499.

Vance & Hines: Creating a Surge of Horsepower at Sturgis