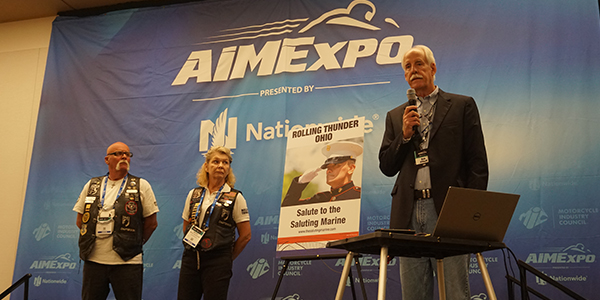 Rolling Thunder’s six Ohio chapters and the National Veterans Memorial and Museum announced Rolling Thunder Ohio, which will take place on May 24, 2020, in Columbus.

Rolling Thunder’s six Ohio chapters and the National Veterans Memorial and Museum announced Rolling Thunder Ohio, which will take place on May 24, 2020, in Columbus.

This event has received approval and followed guidance from the National Rolling Thunder leadership team. It is expected to draw Rolling Thunder chapters, veterans and riders from as many as 15 states, all within a day’s ride to Columbus.

General Michael Ferriter, CEO and president of the NVMM said, “Columbus has wholeheartedly embraced this major event. As home to the American Motorcyclist Association and AIMExpo, this town knows how to welcome riders. To do so in a way that remembers the fallen, respects the Rolling Thunder traditions and supports the NVMM and other veteran causes is something that we have worked hard to make happen.”

“We are within a 425 mile day’s ride to millions of motorcyclists. We expect dozens of Rolling Thunder chapters from all over the Midwest to join us in Columbus next Memorial Day weekend at our event on May 24, 2020,” said Ty Geiser of Rolling Thunder Ohio.

Rolling Thunder will be the key annual event where Columbus affords America the opportunity to never forget American service members imprisoned or missing in action and to always remember those who paid the ultimate sacrifice in service to our country. Rolling Thunder will do this by opening their community to the tens of thousands of participating riders, providing venues for respectful and somber remembrances and supporting those causes important to veterans and the veteran community.

Advertisement
In this article:Ohio, rolling thunder