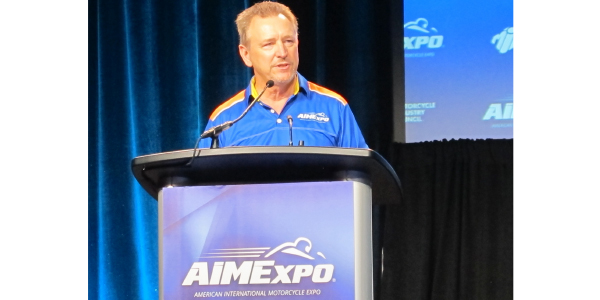 At the 2016 AIMExpo kick off breakfast in Orlando, Larry Little announced the 2017 event would be held in Columbus, Ohio. Fast forward to June 2017 and preparations for the Columbus event are well underway! Big things are indeed happening for the American International Motorcycle Expo, including Indian Motorcycles and Harley-Davidson participating in the combo trade/consumer event. We spoke to Little to find out what dealers can expect to see in September.

You recently announced Harley and Indian are participating, how did that all come together?

Harley will be exhibiting at AIMExpo just weeks after having their dealer meeting and will be showcasing all of their new products to the public for the first time. We want to get all the dealers excited, not just the Harley dealers, and help them understand that AIMExpo really is the central gathering place for the industry. It is important to have Harley and Indian in the conversation when we are speaking of the entire motorcycle industry.

In the past, people have commented that AIMExpo is a metric-centric show… was that accurate?

To put it into context… if you attend the EICMA Show in Milan, there’s always a big to-do about the Italian manufacturers. Ducati, MV Agusta and the Piaggio Group all put their best foot forward for the home market. It’s always a very nationalistic show for the Italians. Ditto for BMW and KTM/Husqvarna for the Intermot show in Cologne. Previously we didn’t have that kind of strong opportunity minus Harley-Davidson and Indian. Although there are plenty of OEs manufacturing products in the U.S., we needed these iconic brands to really showcase the American market. It cements AIMExpo as the truly American show platform.

As part of the MIC and its role as the industry’s trade association, AIMExpo exists to shine a spotlight on the largest recreational powersports market in the world… and it is sure nice to include Harley and Indian!

The new offerings from The Motor Company will be pretty fresh when they arrive at AIMExpo, but other than Harley dealers, what will others get from seeing them there?

Even if you’re not a Harley dealer, you want to have an understanding of what’s out in the marketplace. If you’re in the aftermarket, it’s probably going to be the first time you’ll get to physically see the new bikes in person. There are plenty of touch points around the whole industry from a Harley perspective. From Indian’s perspective, their products will be shown a little bit sooner at their dealer meeting in July, but we’ll have demo rides from both Harley and Indian.

What do you think was the turning point for Harley to finally join AIMExpo this year?

I think that we’re at a moment in the business where we all have to be looking down the road. Harley came to that strong realization in the last year or so. If you read CEO Matt Levatich’s letter to shareholders on their website, they outlined the fact that they’re committed to attracting two million new riders over the next 10 years. They’re also going to introduce 100 significant new models over that time. They came to a point where they recognized that we have to get down to the basics – the blocking and tackling basics of the business – and getting butts on seats. 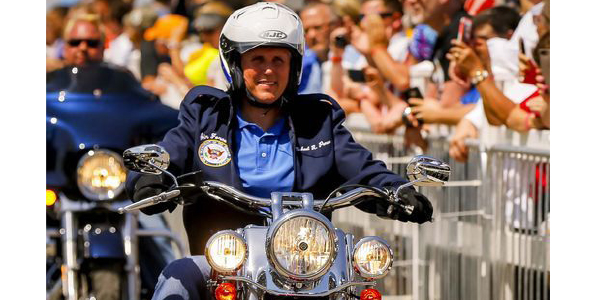 Big News! Vice President Mike Pence has told his team that he wants to come to AIMExpo in Columbus.

Why did they wait so long to join the rest of the industry?

Historically they have operated somewhat independently from the greater motorcycle industry. Single line dealerships, V-twin only events, etc. You can clearly sense their direction and focus has changed, so for them it is now more about being among the larger industry at AIMExpo and telling their story to the media and the dealers, not only Harley dealers. Their commitment to a specific rider expansion goal should inspire everybody in the business to get on board and find a way to get new riders into the marketplace.

Regarding the role of AIMExpo specifically, they know we’re going to have a good consumer turnout with the location of the show – we’re right in a key sweet spot – the Midwest. To be able to show all the new models in one place at one time, it’s a benefit to dealers. Now you can get the consumers in that region amped up about the new product. Prospective customers and the first of those two million new riders are going to have an opportunity to ride their bikes at our demo rides.

We see there are street demos happening next to the Convention Center, but what about off-road demos?

The demo lot is big enough but the physical expense of trucking in the dirt, building the track, trucking out the dirt, power washing the parking lot, all of that was about three to four times the cost of what it was to do it in Orlando. The land was there in Florida, we just had to make the track.
However, we’re excited that we’ll have so many street demo rides going on. It looks like Kawasaki will be doing something fun out there, a little more grandiose than the typical demos.

We heard rumors Vice President Pence might make an appearance. Could it really happen?

We’ve invited him to join us. The political doorway was opened by Bob Althoff, dealer principal of A.D. Farrow, a Harley dealer in Columbus we’re partnering with locally. He’s got close ties to their congressman who has a key relationship with Mr. Pence. What we’ve learned is that the vice president has told his schedulers to make it happen because he wants to come to AIMExpo. While there’s a ton of details to be worked out, he’s told his staff to make it happen.

In a way, it all comes together to complete the picture of AIMExpo as the American platform with Harley and Indian, and potentially the vice president of the United States who rides motorcycles. You might say it could be the trump card for increased dealer turnout at AIMExpo!

Q & A with Larry Little, Vice President and General Manager of MIC Events