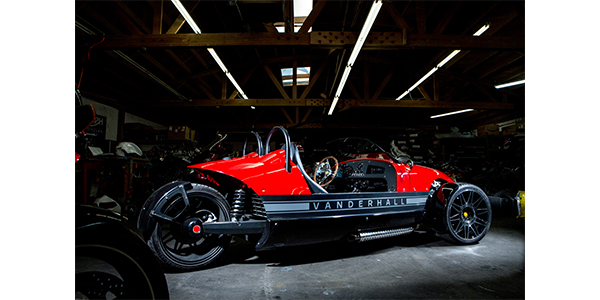 With a healthy power-to-weight ratio and 4.5-second 0-60 mph acceleration, the Vanderhall Venice offers plenty of bang for the buck (MSRP under $30K) and decent dealer margins. Did we mention Vanderhall is made in the USA, so it won’t become a casualty of a trade war?

With many powersports retailers concerned about the potential ramifications of the tariffs, Vanderhall offers a three-wheeled trade buster option. Every component – except for the wheels – is U.S.-made, and Vanderhall’s staff of 35 does all assembly in Provo, Utah. With a healthy power-to-weight ratio and 4.5-second 0-60 mph acceleration, the Vanderhall Venice offers plenty of bang for the buck (MSRP under $30K) and decent dealer margins. Did we mention Vanderhall is made in the USA, so it won’t become a casualty of a trade war?
A little history first. Proving everything is cyclical, back at the turn of the century (1900, not 2000) things like taxes, government regulations and registration fees were an exorbitant nuisance for early OEMs, so three-wheeled “cyclecars,” blurring the lines between cycle and car, were developed. According to the infallible Wikipedia: “The rise of cyclecars was a direct result of reduced taxation both for registration and annual licenses for lightweight, small-engine cars. In France, for example, a car was classed for reduced rates if it weighed less than 350 kg (772 lbs.)… ditto across the pond in the U.K. where three-wheeled vehicles avoided the British tax on cars by being classified as motorcycles.” Sound familiar?
Although company founder Steve Hall didn’t intend to develop a tariff buster (trade wars weren’t even on the radar when he started more than a decade ago), his three-wheeled roadster is a vehicle whose time has come. Priced a little less than the Can-Am Spyder touring model, the Venice is currently “conquesting” new customer niches. “Believe it or not, 33 percent of our customers are women,” says Daniel Boyer, Vanderhall’s director of sales and marketing. “And we are trending with millennials.” Boyer notes that they already have the Edison2 EV version ready for the next major market shift.
In the internal combustion engine world it is already EPA- and CARB-certified, 49-state legal as an autocycle or motorcycle (sorry, dealers in Connecticut). Vanderhall currently has points of sale in 15 states, including the new flagship store in Southern California, LA CycleSports. While the coasts are obvious targets, they are actively recruiting more dealers, particularly in Arizona, New Mexico, Minnesota and the Pacific Northwest. Financing isn’t an issue as each Vanderhall has a 17-digit VIN and is listed in both NADA Guides and Kelley Blue Book.
The turbocharged four-cylinder 1.4-liter powerplant is a GM product mated to a six-speed automatic transmission, with Vanderhall’s optional sequential bump shifter available for those who want to be more connected to the shifting chores. An aluminum chassis (patented tab-and-slot construction) is another Vanderhall exclusive, allowing for a lightweight, yet stiff platform. With a wet weight of 1,450-lbs. and 180-HP on tap, “spirited” canyon carving is encouraged. Should you get a little too exuberant, ABS and traction control kick in.
Speaking of stability, Hall says they originally started with a rear-wheel-drive design, but it was too squirrelly. Back to the drawing board and after six years of prototyping and testing to government standards, the Vanderhall Laguna was introduced in 2016 and the Venice rolled out in 2017.
Steve Hall is 6’5” so the car had to fit him… Even 7’1” Shaquille O’Neal sat in one at a recent trade show, so accommodating MPN’s Editor at “XXLarge” was no problem. Boyer brought out a couple of the Venice models to play race and chase within the Southern California canyons. Initial impressions from the seat are that the glass windshield does a great job of deflecting airflow and the exhaust note is inoffensive despite the straight pipe extending the length of the vehicle.
While it does operate in drive mode, where is the fun in that? Banging through the gears with the bump shifter is essentially the same as a paddle shifter, but more in keeping with historic roadster ethos to match the wooden steering wheel rather than an F1 electronic joystick. Analog gauges and toggle switches make for a dash more reminiscent of a Sopwith Camel rather than a F-35 Lightning stealth fighter.
About the company name, originally called “Hall Moto” for the first six months, it wasn’t working for Steve. So he combined his mother’s maiden name of VanDyke with Hall… the bonus being it was totally white space on the Internet. Every search goes straight to the source! Boyer has also added a dealer locator to route traffic to the closest dealership.
On the marketing front, Boyer has brokered deals with high visibility brand ambassadors like Jamie Foxx, and Jay Leno has already put it through its paces on “Jay Leno’s Garage.” Plans call for the workforce to expand and production to increase to 500 units this year… but that is just the beginning. “The master plan is to have a 1,000,000 sq.-ft. factory,” says Boyer.
It will be the largest factory in Utah under a single roof and would increase production capacity to thousands of units, all with no loss of build quality. All units are covered by a full two-year warranty… and did we mention it is made in the USA?
Want to win the trade war and get new customers into the showroom? Apply at vanderhallusa.com/dealer-inquiry.