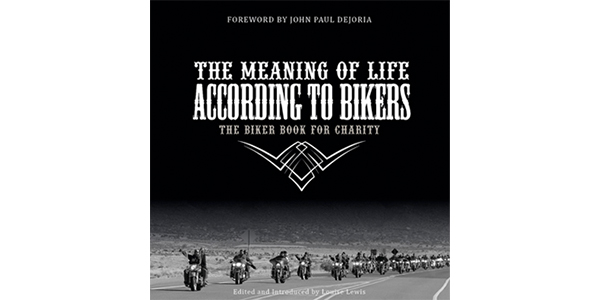 Actor/musician and book participant Sean McNabb joined author Louise Lewis (The Meaning of Life According to Bikers: The Biker Book for Charity ) in the book’s check presentation to CHOC Children’s hospital during a book signing at Orange County Harley-Davidson. McNabb is one of many famous motorcycle riding participants in the book.

“Since The Biker Book for Charity was “born” at CHOC Children’s during a motorcycle Toy Run for the kids,” stated Lewis, a non-rider. “I am circling back to the kids to fulfill my promise.”

The Orange County Harley-Davidson H.O.G. Chapter has conducted the CHOC Toy Run for several years. “It’s all about the kids,” Lewis added.

After witnessing a touching interaction between a sick little boy and a “biker dude” (as the kids called the riders), Lewis, moved to tears, receives a message from God: “Your next book is on bikers.” With a simple “okay,” Lewis embarks on an adventurous 10 year journey to get the book published to honor the good side of riders.

“Publishers were hesitant to invest in the good side of riders,” Lewis said. “Never before has anyone considered motorcyclists and the meaning of life. It’s the ultimate test of not judging a book by its cover.”

The book’s mission– sharing meaning, raising money, saving lives—is designed to both help and honor the charitable heart of the motorcycle community. Lewis’ personal charity effort is the book’s Children’s Hospitals Donation Tour with the goal to visit ever children’s hospital in the country and make a donation. “Yes, indeed, a lofty goal,” admitted Lewis. “With the help from donations and sponsorships, I will ‘get ‘er done.”

A former Orange County resident, Lewis travels the country with the book attending motorcycle rallies and other events to raise money for children.

Motorcycle riders from all walks of life — from Main Street to Wall Street, Hollywood to Washington, D.C. — are invited to peel back their badass masks and answer one simple question: what is the meaning of life? Their answers expose the community’s lesser known philosophical and charitable nature and help to smash the typical motorcycle rider stereotype. Joining the “regular folks” interviewed are the famous, including Peter Fonda, Gen. Tommy Franks, John Paul DeJoria, Jillian Michaels, Kyle Petty, Travis Tritt, Allen West, Carey Hart, Norman Reedus, along with a former Chairman of the Joint Chiefs of Staff, Congressman, Senator, former NASA astronaut, governors, military generals, actors, rock n’roll and country artists, corporate executives, and NFL, NBA, MLB sports figures. Whether you drive on four wheels or straddle a “wild thang” on two, these voices are sure to enlighten and entertain.

The book is available on Amazon and where books are sold.

Advertisement
In this article:Book, Charity