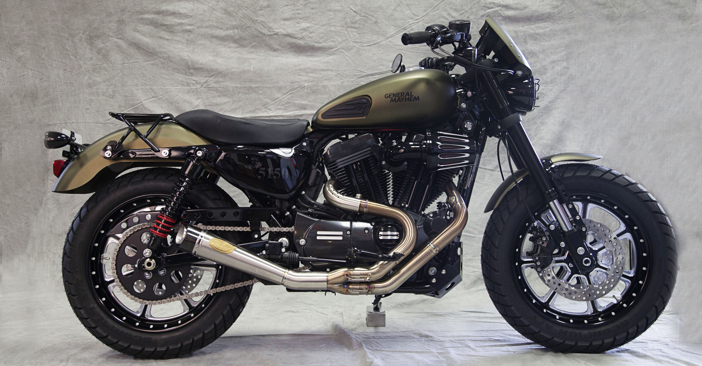 After weeks of heated competition and thousands of votes, America has finally crowned the next “Custom King.” Through six rounds of bike-to-bike battles, fans determined Hal’s Harley-Davidson’s creation ranks No. 1.

After weeks of heated competition and thousands of votes, America has finally crowned the next “Custom King.” Through six rounds of bike-to-bike battles, fans determined Hal’s Harley-Davidson’s creation ranks No. 1. A true rolling work of art, “General Mayhem,” created in New Berlin, Wis., is a modern day dual-sport bike that can conquer city streets and rural roads alike.

“Our vision was a modern day dual-sport bike with an edgy, minimalist look that would appeal to millennials, hooligan riders or the young at heart,” said Bud Curtis, team lead at Hal’s Harley-Davidson. “We are proud to have built the General Mayhem, our take on a Sportster that we hope can be enjoyed by the masses.”

In the second year of the Custom Kings competition, all U.S. dealerships were invited to turn a Sportster motorcycle into a custom-of-one work of art. Initial entries were scored by the H-D styling team based on quality of customization and build, fit and finish, use of paint, design, technique and how teams utilized Harley-Davidson Genuine P&A. From there, fans took control, selecting the winner in a bracket-style online vote.

The General Mayhem features a dual headlight to provide protection in a rugged environment, a 1200cc engine conversion with tuned exhaust to optimize performance and a fabricated tank with padded inserts that allows the rider to connect with the road.

“Customization is an expression of our riders’ individuality, so it only made sense for our fans to select the Custom Kings winner,” said Dino Bernacchi, Harley-Davidson U.S. Marketing Director. “We were thrilled by the response from dealers across the country, and Hal’s Harley-Davidson served up a striking design that challenged the status quo and took the artistry and quality of the Sportster SuperLow to new heights.”

Hal’s had a unique partner in building its one-of-a-kind ride – the local New Berlin high school BUILD Team. Working together as part of a national BUILD Challenge, the team and their mentors turned the Custom Kings build into an educational experience for the students, opening the road to learning more about the world of motorcycling and sparking their passion for the Sportster’s unique style and unrivaled performance.

The other seven finalists vying for the title with Hal’s Harley-Davidson were: