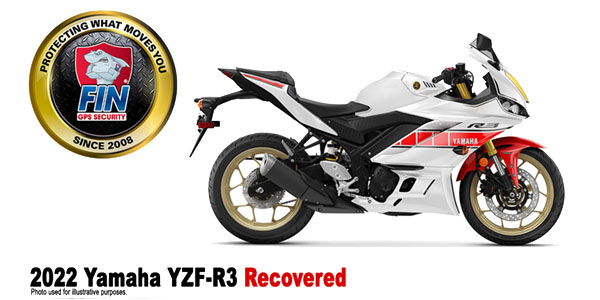 When purchasing his Yamaha YZF-R3 from Kiser Motorcycles in Hawaii, the FIN customer made the decision to have a FIN GPS Security installed at time of purchase. Late one evening, the customer was alerted that his vehicle was moving. When the owner went to check on his motorcycle, it was gone. He immediately called FIN to report it stolen. The FIN theft recovery team tracked his vehicle while he contacted his local police department. The FIN recovery expert made sure the customer was well informed on how to use the multiple features provided on the FIN app, which include real-time tracking, event history and vehicle battery events.

The local police were given the location where the Yamaha appeared to come to a stop. The police immediately made their way to this location, a residence in Volcano, Hawaii. As the police were making their way to the residence, the FIN recovery expert and customer were able to see that the vehicle was back on the move. The theft and recovery team tracked the vehicle until it came to a stop once again.

Using the ‘Find It Now’ feature on the FIN app, the customer provided police with an updated location, which was another residence in Volcano, Hawaii. Within minutes, authorities arrived at this new location, and the vehicle was spotted and recovered. One arrest was made and no further information has been released at this time.