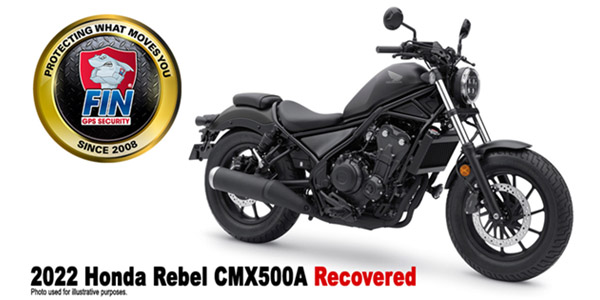 The owner of the Honda motorcycle received a motion alert from his FIN security device. He did not have direct visual on the Honda and reported to the FIN theft recovery center at 3:09 p.m. HST. He also logged into the FIN app, where he was provided tools to view event history and monitor his motorcycle in real time. The data being sent from the FIN provided vehicle battery status, speed, heading and historical location data. Knowing that time was of the essence, he contacted his local police department and provided them with this valuable information.

A FIN recovery expert and the motorcycle owner continued to monitor his motorcycle, where it ultimately came to a stop at a residence in Captain Cook, Hawaii. When dealing with thieves, it is highly recommended that customers wait for the assistance of local authorities to assist with theft recovery. The owner of the Honda and FIN staff were able to leverage powerful FIN hardware and software tools that were instrumental in a successful and safe recovery with assistance of local authorities. No arrests were made at the time, as the thief fled the scene.