Nestled among the Snowbird Mountains along beautiful Route 74, CCC is a magnet for passing riders. 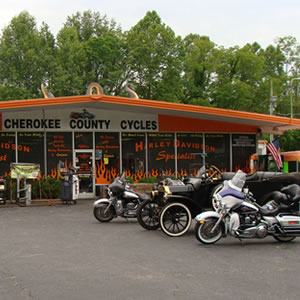 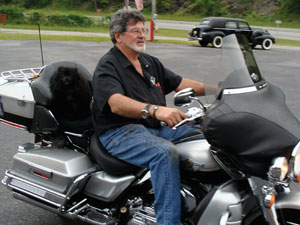 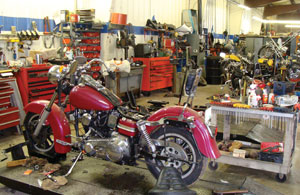 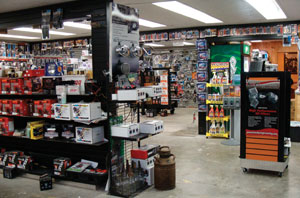 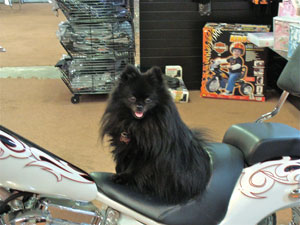 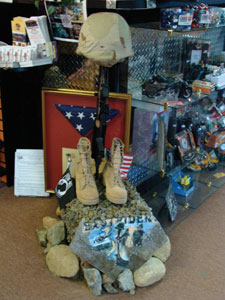 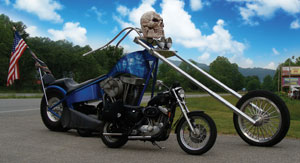 It would be hard not to stop at Cherokee County Cycles, even if you weren’t looking for it. Nestled among the Snowbird Mountains in Andrews, N.C., (a town of just 1,200 souls) along beautiful Route 74, CCC attracts all manner of attention from passing riders with a few well-chosen items of interest — take the 1915 Ford Model T, which owner Mike Pike drives into town to run errands or one of President Roosevelt’s signature black Cadillacs. And there’s the small attraction of Big, a 10-foot-high and 23-foot-long S&S-powered chopper featured on The Discovery Channel’s “Big” documentary. Such iconic items tend to grab the eye of anyone rolling by, gearhead or not.

But it’s not just about getting folks off the road and into the parking lot. Walking toward the building, one notices the shop’s motto proudly displayed in large letters: “We Don’t Care What You Ride, As Long As You Ride!” That’s a bold statement for any shop owner to make, but Mike and his wife Jenny mean it.

While most of the bikes breezing through this beautiful part of the country are Harleys and metric cruisers, Mike and his staff have seen it all, from packs of youngsters on Japanese machines to a 1980s BMW that needed a new clutch cable modified in-house to get its rider and his wife back on the highway.

It’s this sort of creative problem-solving that keeps CCC humming in such a sparsely populated area. While they stock a range of parts, accessories and apparel from Drag Specialties, Mustang and Kuryakyn, their unique “Do all, take all” approach to roadside service really puts them on the map. Mike’s crew is willing to take on any mechanical challenge that shows up, and they do show up because although this area is short on population density, it’s long on optimal riding roads! As a North Carolinian myself, I heartily agree with Mike when he says that his shop is located among some of the best riding roads in the country, such as the Cherohala Skyway, the Blue Ridge Parkway and The Tail of the Dragon at Deals Gap, which draw thousands of riders every season. And with those riders come slipping clutches, blown tires, forgotten road gear and a host of other opportunities for Mike’s crew to offer much-needed parts and service.

With 30,000 square feet of shop and fabrication space, Mike has the facilities to perform almost any mid-ride repair imaginable. “Who needs OEM parts with a setup like this?” says Mike, as they correct a backward front tire on an FLH in with a group from Florida. Every rider is important to Mike and Jenny, from the lone sportbike rider to a group of 70 thundering baggers on a cross-country tour. At CCC, every customer counts.

Service is a huge part of the business to Mike. He’s willing to work with his customers to suit their plans. As I was walking into the shop, Jenny was on the phone with a customer, making plans to open the store before normal hours the next morning to help a rider get back on the road that much sooner. “I don’t mind working 14-hour days, seven days a week, because I’m doing what I love,” says Mike, seeing off a group of cruisers from Indiana. His hands-on approach to running his shop is evident every time another group of bikes rolls up to check out the unique old cars, grab a cup of coffee or just get out of the sun and off the road for a few minutes to stretch. If Mike’s not getting his hands dirty, he’s handing out free maps of his favorite local roads, pointing his customers toward the parts or gear they’re looking for, or just chatting about bikes, roads and life.

This open, friendly demeanor also helps keep CCC humming. According to Mike, he only has a handful of regular local customers, but more than a quarter-million riders from all over the country come through every year. Repeat customers are no strangers around Cherokee County, either. Mike has groups who come through yearly on rides with their hometown clubs, as well as riders he’s seen on and off since the shop opened up six years ago. While the shifting economy has had an effect on everybody, Mike and Jenny are still going strong, “knowing the $25-and-less market is important,” says Jenny. While people are still getting service done, getting the right sort of accessories into people’s hands has been a different game lately.

Not that Mike is going to take a seat on the bench anytime soon. His own Ultra Classic is a rolling display of some of the most rider-friendly and useful products he’s been able to find during his stint in the industry. Durable, practical products that riders who spend a lot of time on the road want and need take up the vast majority of CCC’s showroom, from washable lifetime oil filters from K&N Engineering to dry, clean nitrogen to keep tires at pressure longer. One of Mike’s favorite products is a line of ultra-quiet and durable Lexan windscreens he discovered after racking up thousands of miles behind windscreens that just weren’t up to par.

Rider-focused to the end, Mike has a camping area behind the shop that “anyone can come use for free, anytime,” he says. While already big enough to host a dozen tents, Mike plans to add restroom facilities and other amenities for next season. As if the world’s biggest, rideable motorcycle wasn’t enough to get folks in the door! The economy may be in a slump, but camping right next to some of the most attractive motorcycling land in the nation is sure to keep Cherokee County Cycles on the map for years to come.