American highways can feel so homogenized, with each Cracker Barrel exactly the same no matter its location. That’s fine for the unimaginative, but bikers seek out the unique; the diner, road-side stop or bike shop that retains individual character.

This attitude might explain the longevity of independent shops like Ben’s V-Twins in Indian Trail, North Carolina. In one location or another, Ben’s V-Twins has operated for 25 years in the southeast suburbs of Charlotte and you simply don’t stay in business that long as a dedicated V-Twin service and performance shop without reason. The shop’s customers have stuck with Robin and Ben Edwards through the years, too, an indication of the loyalty they’ve earned even though (or perhaps because) they’re humble about it. 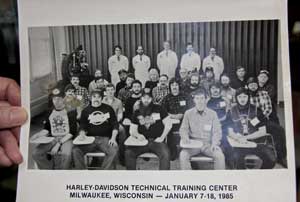 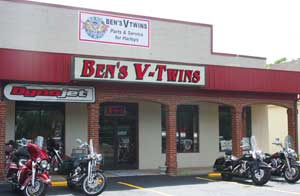 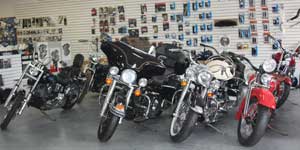 “We treat people the way we want to be treated,” said Ben, adding that when people know and like you, they’re more comfortable doing business with you. Added Robin, “And we take time with people.” While some might say that’s just southern hospitality, it’s more than that. Ben and Robin embody an easygoing, low-pressure attitude that makes people feel welcome. As it turns out, that’s solid business wisdom.

Ben opened his first shop in the late ’70s, then in 1980 went to work for the local Harley dealership and was selected for Harley-Davidson training classes in Milwaukee. A decade later, with added experience both as a mechanic and drag racer, he was ready to go out on his own again.

In the same year they opened Ben’s ­V-Twins, Robin left a good job (“with paid vacation and everything,” she says) and they had their first child. Why risk it to open your own shop? “I guess I have an independent spirit, and I enjoy working for myself,” explained Ben. Reason enough.

It’s a tight biker community in the Carolinas. Ben and Robin maintain good relationships with other independent shops and franchised dealerships as well. “When we started in business we were the only independent shop. Since then it exploded and then contracted, but we all stay close,” said Robin.

One example of this is an alliance they’ve formed with several other shops and businesses to share the overhead of holding charity events. Co-sponsoring benefit runs keeps all the companies active in the community without it becoming a burden to any one of them.

There’s another big factor to Ben’s success that isn’t related to location, community presence, or business drive. It’s this: Ben knows what he’s good at and he sticks with it. As trends changed over time, Ben kept doing performance engine work and routine service for his regular customers in a straightforward, reliable way. He kept building Knuckle, Pan and Shovel engines, as the shop’s showroom proves. In fact, it’s this very capability that garnered additional work as time passed. The folks in the local AMCA chapter know that Ben’s V-Twins is the go-to place for their older bikes. Other shops, along with several franchised dealerships, send this work Ben’s way. 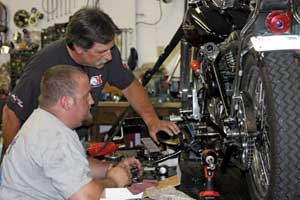 Part of staying with your core expertise means keeping fads at bay. When one-off custom bikes were hot, Ben built a couple of them because he could, but it wasn’t a solid business model. “There were lots of shops that jumped on the bandwagon and those guys are gone,” said Ben. “We steered clear of all that and stayed with our basics; a lot of engines, a lot of performance work, a lot of service work.”

These days they get customers asking about big front wheels for baggers and will accommodate within reason, making sure alterations first meet standards of safe handling. Ben will send you to someone he trusts if he feels the work is more radical than he likes to do.

And before you say Ben is missing out on tuning and upgrade work for Harley’s current models, know this: three years ago they invested in a state-of-the-art dyno and hired master tuner Mark Harrington to operate it. A former instructor at MMI, Mark just returned from master tuner training for 2014 models at Doc’s Performance Tuning in Florida. So with Ben’s knowledge of the old iron and Mark’s expertise in current tuning methods, they’ve expanded their customer base even further. The third man in the shop is Brandon Wallace who came on “green” three years ago, but has learned quickly thanks to on the job training from Mark and Ben. 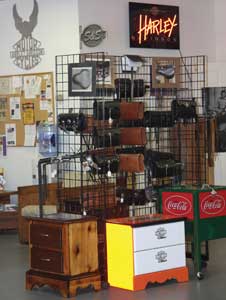 As many will tell you, there’s nothing easy about running a retail bike shop. Long-term relationships with companies such as Drag Specialties help, but shop owners have to be diplomats. “When people bring in parts they bought somewhere else, well, you don’t go to the steakhouse and bring your T-bone with you, do you?” asked Ben. “But we like to help when we can.” They’ve learned to draw the line when safety is
an issue.

But there’s no shortage of work. When I visited the shop, Ben was building two ’36 Knucklehead engines for a father and son team to take on the Motorcycle Cannonball Run. Ben and his son Wes had recently completed a Shovelhead for Wes using parts that were around the shop. And the AMCA meet in Denton netted Ben a 1946 H-D frame making possible the Knuckle restoration he’s been working toward.

So what’s the formula for longevity? Start with a welcome attitude, add solid relationships, firm standards, and proven expertise. Oh, and hard work, too. Easy to say, not so easy to do.