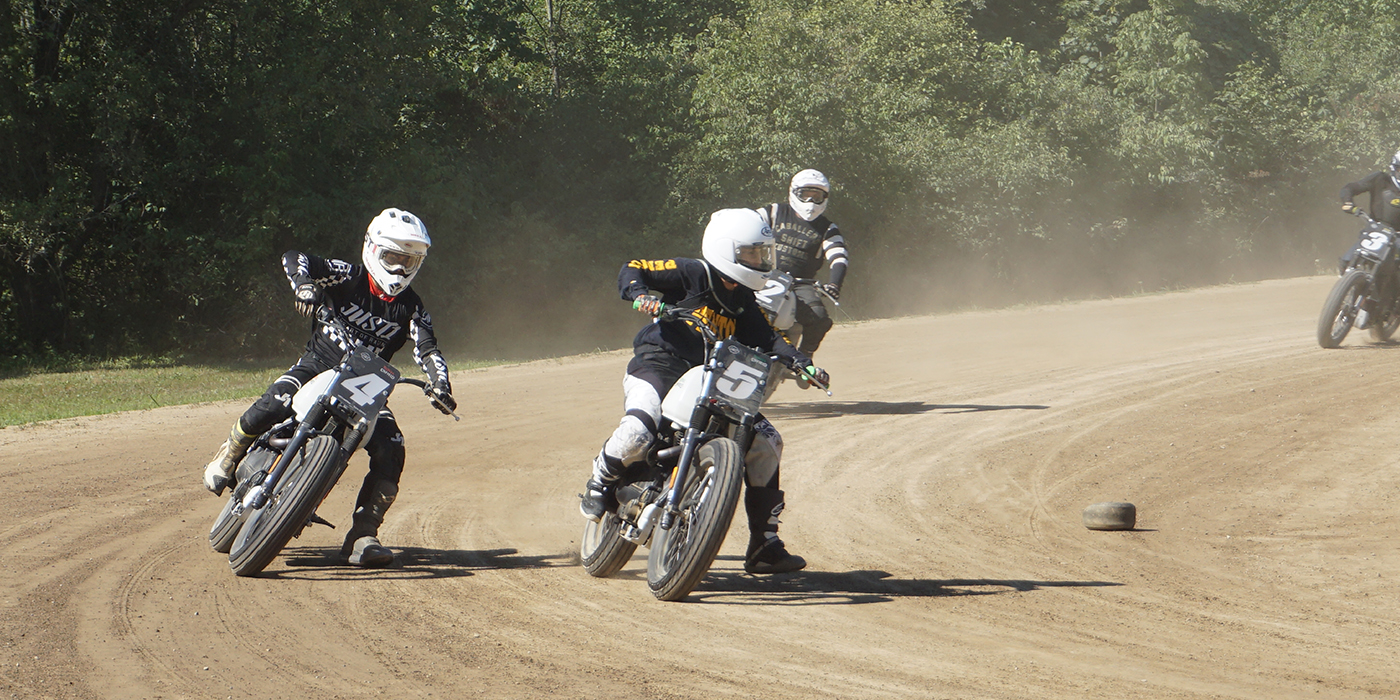 Leading the three-and-a-half-hour course was Johnny Lewis, the professional flat track and Supermoto racer and Moto Anatomy founder. Just like the name, Moto Anatomy connects the body and the motorcycle.

As a commuter rider, there are moments when I’m at a red light and imagine I’m on a racetrack. The majority of the lights that I pass each day, I can count how long it will take for it to turn green and get a strong lead against the car in the lane next to me. Though I can only dream of racing next season on the American Flat Track circuit, an opportunity arose to learn about sliding from a racing legend, so I signed up immediately.

The inaugural Slide School was held on Aug. 8. A flat track, located in New London, OH, at the Lupica Training Facility was glistening with fresh water from a homemade water van that was soaking into the sun-drenched dirt. It was like watching the Zamboni drift across the ice before a hockey game. It didn’t take long for the water to soak in, leaving a fresh dirt track for the first class to practice sliding.

Leading the three-and-a-half-hour course was Johnny Lewis, the professional flat track and Supermoto racer and Moto Anatomy founder. Just like the name, Moto Anatomy connects the body and the motorcycle. Before the class of 10 got on the track, Lewis explained that there are several habits that will need to be broken to excel on the flat track, and connecting the mental attributes of a racer with how you adjust your body to the track are intertwined on a path to success. Two of the most notable are putting your foot down to stabilize your turns and straightening your arm as you go into the curve.

“I think one of the biggest takeaways from the Slide School is to be more in control of the motorcycle,” Lewis said. “When you’re in control, you’re able to learn the track a little quicker and become a better racer. But if you’re not becoming a racer, you can develop better habits for when you’re riding on the road. Techniques will help you save somebody’s life in a situation when they need to stop quicker or miss something on the side of the road.”

“One of the things I love most about Flat Track School is introducing the FT411 to riders. It is a very entry level motorcycle and I can teach the basics and develop a rider from a beginner level, but I can also train professional riders how to use the bike as well,” Lewis said. “It’s very cool to see the progression and working with a brand like Royal Enfield has been pretty neat, considering they’re so new to the sport but they’re really trying to push and grow the sport.”

“Our partnership with Moto Anatomy came about when my partner in the UK wanted to take the newly released Twins out on a flat track,” said Breeann Poland, marketing lead at Royal Enfield Americas. “Since the Twins were brand new, a few other people suggested turning the Himalayans into FT411s, so that’s what we did.”

The Himalayan was designed as a motorcycle for the Indian market that was purpose built to ride on the Himalayas. With adventure riding being one of the fastest growing segments in the world, the Royal Enfield Himalayan made its way to the U.S. and is now the company’s best-selling product.

“We wanted something that’s not intimidating and could transition people into the adventure riding segment. The Himalayan has a low entry price point. There are a lot of motorcycles out there that are $20,000 to $30,000, so if it tips over, you’re breaking the bank just to repair it,” Poland explained. “We’re actually sold out of the Himalayan in the U.S. right now. Dealers can’t keep them in stock.”

The transition from a Himalayan to a FT411 was an easy task, according to Poland. “For the Slide School, we partnered with S&S Cycle and they built a performance kit for the FT411. Adding their kit, we changed the foot peg position, we put race bars on, we took out the headlight and it was very easy to convert the Himalayan to a flat track bike.”

With feedback from Lewis during the development of the FT411, the structure of how the Slide School would be taught was created.

“One of the reasons why Slide School is so unique is that we’re using a larger motorcycle displacement size. A lot of schools are taught on minibikes and when a rider makes a transition from a minibike to a big bike, it’s a bigger curve. The FT411 allows me to have a nice progression. This is the size of the bike to use if someone wants to go racing.”

The class is open to riders of any skill level.

“Anybody can take the class if you know how to sit on a motorcycle and let the clutch out,” Lewis said. “And if you don’t, I have a crew who could teach you to do that.

“For a beginner to experience the flat track, it’s relatively easy to go around in a circle. It’s tougher to go fast in a circle, but it’s easy to get out there and do it,” Lewis said. “Slide School is the perfect way to get into a new sport, learn good habits, then get better and faster.”

Slide School is making its way to several different locations across the U.S. this fall, including Ohio, Pennsylvania, South Carolina and Florida.