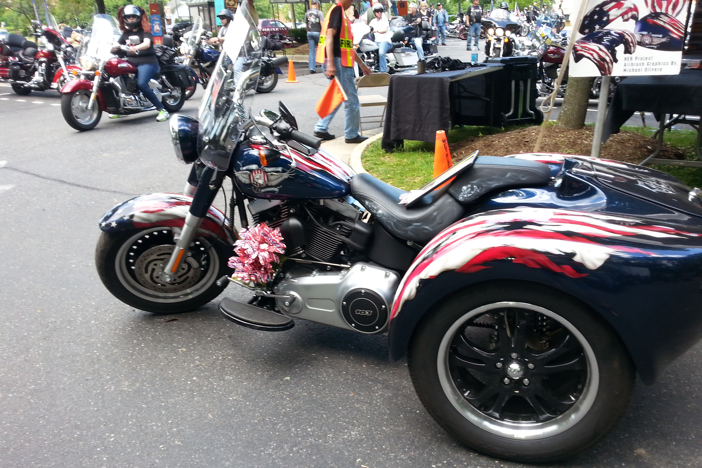 A journey that will come to an end on November 11, Veterans Day, will open a new chapter in someone’s life as the H.E.R. Project Trike will be raffled off at Woodstock Harley-Davidson at 11:11 AM.

“It’s been an amazing journey meeting and talking with the men and women of our great country that have served or have had someone in their family serve,” says Gina Woods creator of the H.E.R. Project which stands for Honor, Encourage & Recognize those that have served in the Armed Forces.

In partnership with Woodstock Harley-Davidson, which donated the Trike, the XX Chromes All Women Bike Builders, www.xxchromes.com, built the Trike on stage at the International Motorcycle Show in 2013. It traveled around the United States in a fundraising campaign at different Veteran events, motorcycle rallies, conventions and trade shows and has been to Washington DC with the Rolling Thunder motorcycle organization and one million other motorcyclists.

“We have raised $22,000 for Disabled American Veterans with the help of Woodstock Harley-Davidson. Owners Doug & Kricket Jackson and their entire team are huge supporters of Veterans and their families,” exclaims Gina Woods. “We have had an out pouring of support on this project since the beginning with Tammy Duckworth’s endorsement and signatures from celebrities such as Gary Sinise, former Chicago Bear John Janata and Green Bay Packer Lee Roy Butler. In addition, The H.E.R. Project has also been featured in 6 national magazines, 2 television features, on numerous motorcycle blog sites, and 3 radio interviews.