A new Indian Scout, customized and built by Klock Werks in Mitchell, South Dakota, is a splash of fiery red in the new Nashville General Store, Jack Daniel’s first ever retail and experiential location outside of Lynchburg. 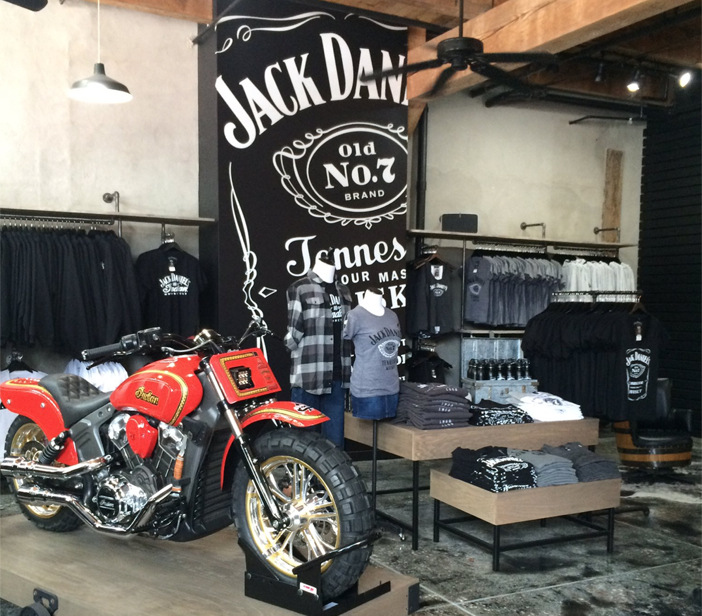 A new Indian Scout, customized and built by Klock Werks in Mitchell, South Dakota, is a splash of fiery red in the new Nashville General Store, Jack Daniel’s first ever retail and experiential location outside of Lynchburg. The independently owned Jack Daniel’s Nashville General Store folks are fired up about their new business in the busy historical tourist area of Marathon Motors in the Northwestern are of Nashville TN, according to David Stang, National Director of Events and Sponsorships for Jack Daniels.

This stand-out custom Indian Motorcycle has been brought to life by Jack Daniel’s under the “Bottle and Throttles Don’t Mix.” campaign. Klock Werks’ second partnership with Jack Daniels transformed a Polaris Industries Indian Scout into a work of art that pays tribute to the vision of both brands, and there’s only one place in the country you can see it.

Designed by Karlee Cobb (age 22) and her step-father Brian Klock, the “Tennessee Fire” custom Indian Scout was designed and built at Klock Werks in Mitchell, SD for ImageSeller and Jack Daniel’s to honor their new store in Nashville and the “Tennessee Fire” brand of flavored whiskey.

“The store’s owner, Lee Wandling, is a big fan of Indian Motorcycles. He thought it would be great to bring Indian into his store,” Stang said.“Wandling, Klock, Cobb, and I thought it would be appropriate to use a Scout to highlight the JD TN Fire brand while bringing attention to the actual JD Fire Department.”

“It was fun to collaborate with Karlee; she and Lee Wandling hit if off right away, and he made that call. To see the bike from the mind of a young land-speed record holder and from a 49 year kustom bike designer dad was a great mix. Young and old, alike, just want to ride this bike,”commented Brian Klock, President and Visionary of Klock Werks. “Once again, we are so honored to be picked by Jack Daniel’s and ImageSeller to create this fun twist on a legend.” 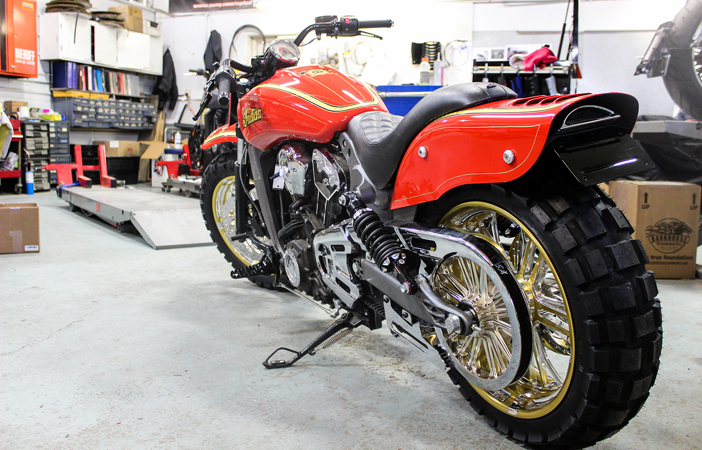 The bike features custom paint and hand-turned gold leaf “fire” graphics by PPG Paint and artist Jeremy Seanor at Lucky Strike Designs in Pennsylvania. The R&D team at Klock Werks assembled the bike using Vance & Hines Grenades Exhaust, Performance Machine wheels, MotoGadget turn signals, a Klock Werks Outrider Rear Fender (modified), louvers by Randy Gribble of Lake City Rod and Custom in Watertown, SD, a modified RSD seat, and a modified Belt and Pulley Guard (custom lower belt guard, all chromed with pulley and rotors). The handlebars are one of Klock Werks’ newest releases to the product line for Indian Scout- classic powder coated black bars. The taillight is Dynamics (custom), and the tires are Continental knobby, 150 on the front and 180 on the rear.

The result is a spirited stand-out, an homage to the past and a lively look to the future.