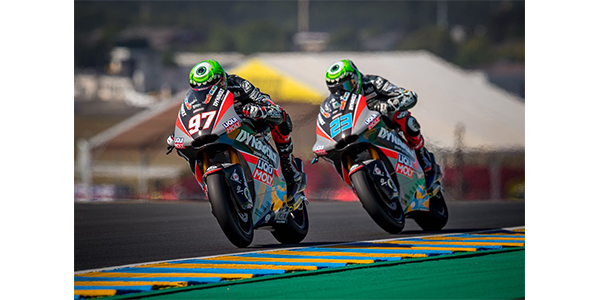 When we received the heads up that HJC was showing off some new lids and hosting the MotoGP round in France, we were all-in. Heading into their third season as title sponsor of a MotoGP race, HJC pulled off a win for their fans, distributors and VIP guests who attended the fifth round of the world championship at LeMans, France, on May 20.

Although HJC has its roots in South Korea with its headquarters, R&D department and manufacturing plant, “the No. 1 helmet company in the world” (as they call themselves) has branched out. It is indeed an international company, as evidenced by the list of attendees at the Grand Prix of France. Guests included distributors and reps from as far as Russia and Australia to France, Germany and Spain. There were even contingents from South Africa and Honduras. The U.S. was represented by a solid group that included Sullivan’s Inc., Helmet House and, of course, MPN.

HJC continually lives up to their “No. 1 in the world” standing, not just because of the sheer volume of helmets they sell, but also because of the way they are always innovating and bringing new ideas to the market. The French GP was a case study in why they are leading the pack. HJC is the only helmet company ever to sponsor a MotoGP event, and they used the race weekend to kick off some new products and generated plenty of buzz.

It was a big weekend for Monsters Inc.’s one-eyed character Mike Wazowski as riders including Marcel Schrötter, Xavi Vierge, Jorge Navarro and Danny Kent in Moto2 and Albert Arenas and Philipp Öttl in Moto3 did work with the new helmet graphics during the race weekend. However the real blockbuster was when Andrea Iannone hit the track wearing the Deadpool graphic from HJC. The movie opened during race weekend in Europe, so it generated quite the buzz when Iannone switched things up for the event.

The fluorescent green Mike Wazowski helmets featuring a giant oversized eyeball on the top were impossible to miss on the track. Wazowski, the scare-team expert from Disney-Pixar’s Monsters Inc. flicks, is an unexpected character choice for a motorcycle helmet graphic. However, according to HJC, this wild and bright, one-eyed graphic stands out like no other on the track or the street.

The Deadpool graphic on Iannone’s RPHA 11 is the second design of this comic character for the helmet maker; the first was featured on the IS-17. Deadpool is not your average super hero, either. The sarcastic and witty character from X-Men may not be the typical role model, but he has won the hearts of comic fans around the world. The HJC graphic replicates Deadpool’s classic comic super-suit with textured red design and a muted matte finish.

However as eye-catching as the two new graphics may be, it’s what’s inside that really counts. The RPHA 11 model is HJC’s premium helmet that’s constructed of PIM+ materials for an ultra-lightweight shell with excellent shock-resistance. Each helmet in the RPHA 11 series comes with an extra smoke shield, Pinlock insert, chin curtain and breath box, as well as a five-year warranty.

While the new lids stole the spotlight off the track, much of the on-track excitement came from the Moto3 class with many unexpected moves and wild crashes. HJC rider Albert Arenas claimed his first Moto3 victory wearing the new Wazowski RPHA 11. Marcos Ramirez, also wearing HJC, finished third for his second race in a row. Watching the pack of rabid Moto3 racers barrel down the front stretch into the first turn three-bikes wide was pretty intense. These young riders put on a show that had the crowd of more than 200,000 fans on the edge of their seats.

The biggest thrill of the weekend was being on the grid before the Moto2 race. We had the opportunity to walk the grid with Sullivan’s Bobby Sullivan and Ed Hughes, as well as Rene Monestime, John Harold and Nick Vaughn from Helmet House.

Before meeting up with them and attaining the proper credentials, we tried, in vain, to get into the paddock and pit lane with just our VIP Village pass. That was a no-go. We were turned away at every gate, but you can’t blame us for trying.

Overall, the HJC VIP Experience was incredible and not at all how we usually attend races. Instead of standing 10 people deep waiting for a port-a-potty, we had our own bathrooms with flush toilets and jet hand-dryers built into the faucets. As the title sponsor, HJC had a private hospitality suite trackside, between turns 10 and 11, looking down at the end of a long straight where riders were reaching speeds of nearly 200 mph.

We also had access to an official BMW X5 MotoGP track vehicle that would drive us to prime viewing spots around the track. And the food… Do you think there were hot dogs and hamburgers? Not a chance. We were given gourmet French meals for breakfast and lunch and treated to a few handcrafted adult beverages to wash it all down. So much for the “speedway steaks” and warm PBR.

HJC’s gala dinner on Saturday night was another highlight of the weekend. North American President George Hong was the emcee for the evening’s festivities that included awards given to Sullivan’s Inc., recognizing Bobby Sullivan’s commitment to the brand throughout the years. Hong also acknowledged Mrs. H.K. Kim, the wife of HJC founder and CEO W.K. Hong. George said that Mrs. Hong is like family and has been a great influence on the company for more than 30 years, but she had never been recognized for her role. An award was presented to her as well as to retired North American President Scott Hong for their years of service to the HJC brand.

The big splash of the Deadpool and Monsters Inc. debut at the French MotoGP is just the beginning. George Hong said that HJC will continue reaching out in new ways to build excitement, not only for their helmets with the comic characters they have licensing agreements for, but also with new designs to help bring new riders to the sport. “We have collectors calling us to buy our helmets because they like them so much. They don’t even ride, but maybe they will start.”

Hong said there will be an announcement about HJC’s 2019 title sponsorship soon but not in time for this article. We also got a sneak peek at some exciting new lids during dinner, but that’s all we can say for now. Stay tuned. 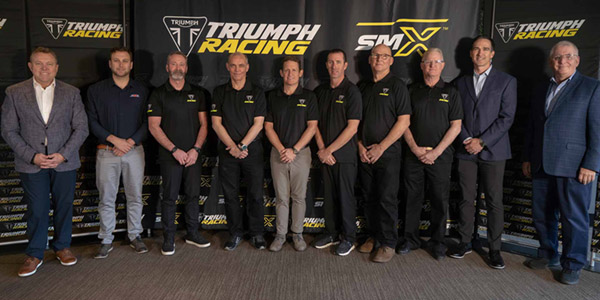