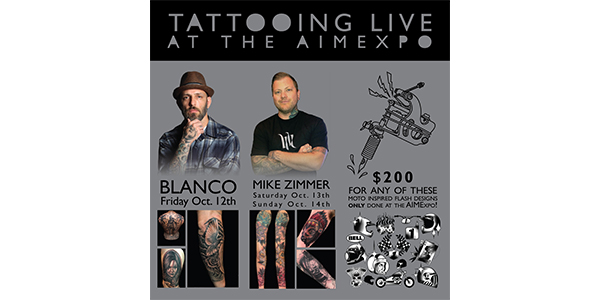 As the American International Motorcycle Expo presented by Nationwide makes its West Coast debut inside Las Vegas’ Mandalay Bay Convention Center, an array of new vehicles, gear and accessories is being introduced to the marketplace as nearly 500 exhibitors and more than 20 manufacturers fill the show floor, hosting global, domestic and public debuts. In addition to the celebrating the latest products coming to the industry, the introduction of MotoCulture puts the spotlight on motorcycle culture and lifestyle with an immersive showcase that focuses on the machines, the people and the companies behind them. Anchoring the space is popular Las Vegas tattoo parlor Hart & Huntington and renowned custom builder Roland Sands Design.

Beginning on Friday, Oct. 12, AIMExpo will become a satellite location for Hart & Huntington. Attendees will have the unique opportunity to get some permanent ink at the show, as artists Blanco and Mike Zimmer will be on hand for live tattooing throughout the weekend. Blanco will be on hand during Friday’s final trade day, before handing things over to Zimmer for the weekend consumer days. To commemorate the experience, Hart & Huntington will offer an exclusive selection of moto-inspired designs that will cost just $200, available only at AIMExpo. Additionally, founder Carey Hart will make an appearance at the show on Friday, and will randomly select two lucky winners to win tickets to his Good Ride Rally in Las Vegas.

Roland Sands Design will take advantage of the opportunity to use MotoCulture as a platform for a unique brand experience. Attendees will be able to see the timeline of Sands’ most iconic builds dating back to the late ’90s, which helped make him a household name. Many of those bikes will also be on display, as will Sands’ 1998 championship-winning AMA 250 Grand Prix roadracer. Mannequins aboard the bikes will feature the latest apparel and accessories from Roland Sands Design, while the bikes will include some of the company’s latest hard parts. All of these products will be showcased at the Tucker exhibitor booth as well. Roland Sands himself will be on hand throughout the day Friday to meet with AIMExpo attendees.

“Part of the inspiration of MotoCulture was to bring attention to the individuals that have helped influence motorcycle culture, and played a crucial role in the enthusiast lifestyle,” said Kevin Dunworth, MotoCulture ambassador. “It couldn’t be more fitting to have the namesake brands of two of the industry’s most influential figures serve as the centerpiece of this communal area. And to have both Carey and Roland lend their presence to AIMExpo presented by Nationwide just puts everything over the top.”

While Hart & Huntington and Roland Sands Design will be focal points of MotoCulture, the space also brings together people from all walks of the motorcycle community and beyond, creating a communal area that attendees will want to explore and spend time in. “Espresso Lane” presented by Nationwide will allow visitors to satisfy their caffeine fix with a specialty coffee bar, while the Race-Driven “Roadhouse” will offer adult libations with the support of Race-Driven, a Michigan-based aftermarket supplier of ATV, UTV, motocross and street bike parts, accessories and apparel. Additional MotoCulture brands include American Flat Track, AmeriVespa, Bell Helmets, BMW Motorcycle Owners of America, Bonnier Riders Retreat, OC Gooniez Grom Squad and ROXOR Off-Road by Mahindra.