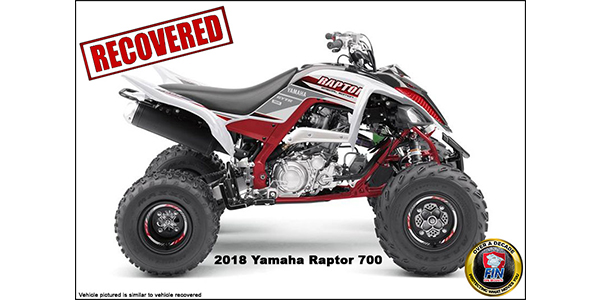 With the thieves having more than a 24-hour head start, FIN starting tracking the Raptor and located it quickly.

The FIN Tracking Center got a call from a customer claiming his Raptor 700 had been stolen the previous day. With the thieves having more than a 24-hour head start, FIN starting tracking the Raptor and located it quickly where it was taken the day before and remained in a wooded area. We were also told that the thieves took more than the Raptor, as they also got away with some welding equipment and tools.

FIN continued to monitor the Raptor as the location was communicated with the local police who were on their way to the location. After sending maps of the wooded area in which it was located, it gave everyone a more accurate location of where the Raptor was and immediately spotted once they headed out into the woods. This looks to be a case where the thieves took the ATV and then planned on coming back after they felt it was safe. The Raptor was recovered and it would have been nice to catch the thieves but they will at least be in for a little surprise when they come back and nothing there for them.