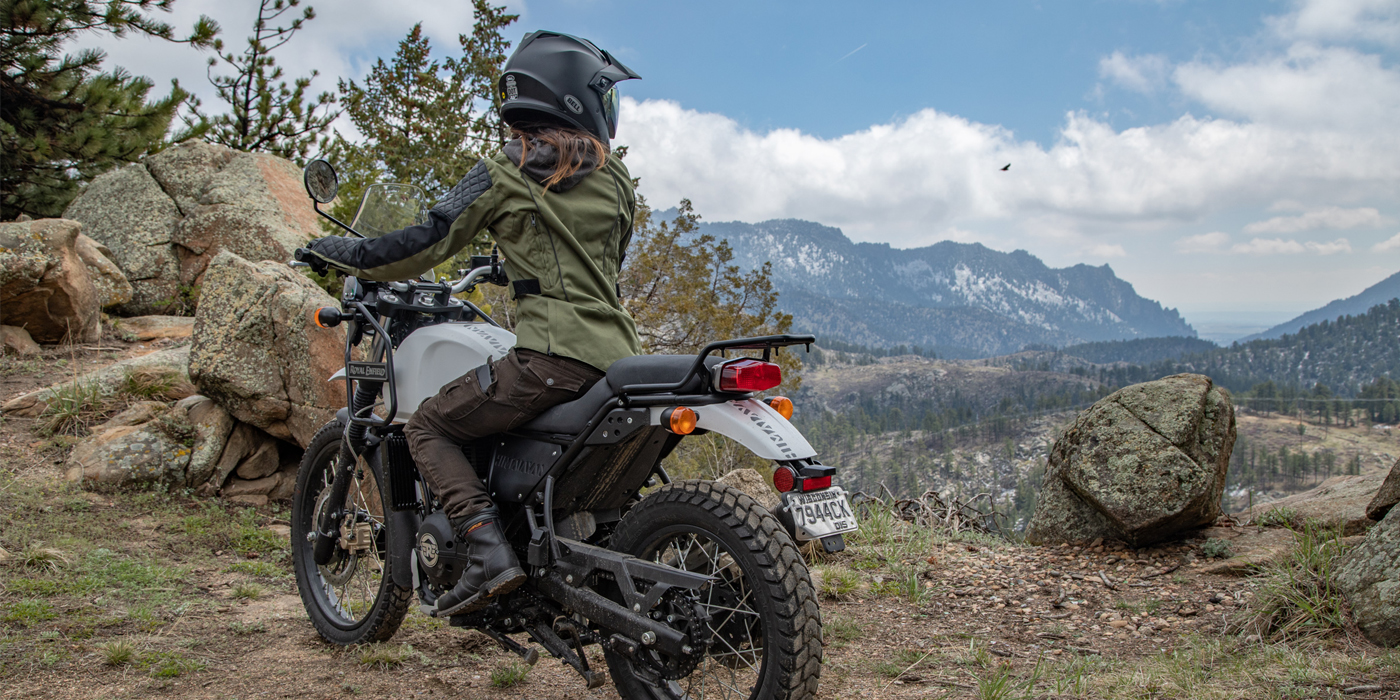 Across the globe, COVID-19 has changed the way OEMs do business, from delayed manufacturing and shipping along with management working remotely. MPN spoke with Royal Enfield’s Marketing Lead, Breeann Poland to check in on how the company is managing during the pandemic.

Across the globe, COVID-19 has changed the way OEMs do business, from delayed manufacturing and shipping along with management working remotely. MPN spoke with Royal Enfield’s Marketing Lead, Breeann Poland to check in on how the company is managing during the pandemic.

MPN: A large part of Royal Enfield’s company is based in India, correct? How has the coronavirus impacted business?

BP: The main headquarters of our company is in India. During the end of March and April, all of our factories were closed down, so we weren’t producing any new units or sending any out across the globe. India was shut down as a whole, which is our largest market. I would say at this time, it represents 95% of our sales globally. So, from a global sales impact, we have been greatly affected here in the U.S.

MPN: How are U.S. dealers coping with the changes from COVID-19?

Unfortunately, that’s not because we’re growing the brand exponentially. It’s because, in certain countries, there have been complete lockdowns, specifically in Italy, India and a few other places for example, who are typically beating us in the sales department. But this has been a great time for us to start new campaigns to help dealers who did stay open.

MPN: What types of campaigns have you created to help dealers?

BP: We started a lead generation campaign through Facebook, Google and websites. We wanted to show dealers that we we are supporting them during this time. We’re seeing about 500 to 1,000 new leads come through every week. The regional managers have been checking in with their dealers on a weekly basis and they’re letting us know the status of each dealer, along with how we can support them. In March, 85% of our dealers were closed. Now, we’re seeing about 85% of those dealers open now. They’re operating on different contingencies. Some are by appointment only, some are open with reduced hours or reduced staffing, but all of the dealers are actively trying to make sure that they stay open or are ready to reopen. The few that have not opened yet, we are fulfilling wholesale unit orders. So, we’ve had a good increase of dealers putting in orders from our warehouse. We are seeing almost all dealers actively ordering new units. This is not something that we expected.

MPN: Has the pandemic delayed any new releases or new products coming out?

BP: Unfortunately, things that we were looking to launch or announce have been delayed due to the pandemic. When a company has new products and a timeline, especially for us, as we are a younger brand in the U.S., new product launches are extremely important for us to get visibility, not only to potential consumers but also attracting new dealers. We’ve had to re-adjust our timelines for new product introductions and, at this point, we don’t have a clear date on when we will able to launch those new products. One product is a refresh model that India has already launched, as well as Europe, and we were next in line. The shipment of those has not left India because of the pandemic. The other one is a completely new product and India still has yet to launch it, and we will follow suit. I don’t anticipate that coming until probably winter of 2021 at this point. We’re not going to stop the product. We just have a slight delay of five to six months.

MPN: Is there a product that’s selling the best right now in the United States?

BP: The Himalayan. Since we introduced the Himalayan in 2018, it’s been consistently our top seller. What the dealers have in stock is all that we have available at the moment. So shipments stopped for them, and for all products coming from India. But even during this pandemic, the Himalayan sales were higher than any other product we have.

I think the reason why it’s so popular is because it’s helping bring more people into the adventure motorcycling segment. It is smaller, it’s not too heavy and the price point is not going to break the bank. I think more people are being less standoffish about the adventure segment. New riders can’t afford to drop a $25,000 motorcycle.

MPN: Because of the success of the Himalayan, Royal Enfield started the fire under other OEMs to follow suit.

BP: You can see other OEMs started developing a smaller displacement adventure bike because they saw what we were doing and said, “Royal Enfield gets it. They have something that a 45-year-old can ride and a 16-year-old can ride.” We have quite a few accessories available for it, from hand guards, engine guard and more. Even with the accessories, you’re spending less on a brand-new stock motorcycle than from another OEM. I think it’s really helped us as a brand, but it has also helped adventure motorcycling as well.

MPN: How are the Twins doing?

BP: The Twins are doing great! The INT650 seems to be the Twin that more people are gravitating towards, up until we started this lead generation campaign.

We get more requests for dealers to reach people that are interested in the GT, so hopefully they’ll turn into some sales and the GT will start battling the INT in terms of sales numbers. First, the Himalayan and then a close second would be the INT and then the GT 650. The Classic sales have seen somewhat of a decline. I think when you introduce a new product, the older product tends to take a back door. We’re still selling Classic 500s, but not at the rate we were three years ago.

MPN: What are some other initiatives RE is involved in?

BP: We have launched some really cool programs for the dealers to help drive traffic to the dealerships as people see that it’s not just about selling units but creating a lifestyle. Something that we did here in Milwaukee was a partnership with a program called Build Moto. It’s a STEM program and the idea is to team up mentors with various schools in the Milwaukee County area. We donated parts and a Classic 500 to each of the schools. We donated about 12 Classics. Because of the pandemic and all of the kids being homeschooled, we weren’t able to finish the program this year.

Our intention, over the next five or 10 years, is to expand it into each state that has an interest. We’ve seen a great interest from our dealers to be able to have a program in their area.

What we want to do is perfect it here in Wisconsin first before expanding it. In the future, we want to start engaging with other OEMs to take part in this program because we do believe that it’s helping create a new group of riders.

MPN: As a company, Royal Enfield has made significant donations during COVID-19, right?

BP: Royal Enfield delivered 150 care packages containing self-care products from local Milwaukee businesses to medical workers at Froedert Hospital earlier this month. We also provided 2,000 PPE masks as part of the donation to the hospital. Included in the packages were soaps, candles, handmade cards and more. Royal Enfield and brand ambassadors across the U.S. identified opportunities in their local communities to provide surgical masks to various hospitals in need. In total, Royal Enfield has donated 45,000 surgical masks over the past month in Minnesota, California, New York and several other states.

MPN: Has the pandemic changed your partnership with American Flat Track?

BP: That partnership is in full swing. We signed the partnership agreement about a month before this pandemic started. We’ve been actively working with them and the revised schedule and their new approaches. We plan on being at as many events as possible. The idea is to offer demo rides at American Flat Track events that have space for it.

Our rider Johnny Lewis, who’s racing our Flat Track Twin, and I were on an episode of American Flat Track a couple of weeks ago. We had a great time talking about the development of the Flat Track Twins and what we intend on doing in the future. The episode was an undercover announcement of the Slide School we’re going to launch. Hopefully, we can get dealers on board and bring the Slide School programs to them in the future.

MPN: Has BUILD TRAIN RACE been put on hold because of the pandemic?

BP: We launched it last October and we sent four females, who are involved in the motorcycle industry, a stock INT650. The idea was for them to pull it apart and design a flat track bike; build it, train on it and then race it. We got the build aspect finished. All of the women built four beautiful motorcycles, each one extremely different from another. We shipped all the bikes here to Milwaukee and we were going to have them train during the Mama Tried Flat-Out Friday weekend. The night of our reveal party, we got a notice from the governor on March 12, that we got our stay at home orders. So, we had the reveal party with local Milwaukee fans who got a chance to see the builds up front. The women have not been able to train on the bikes yet and they’ve not been able to race on them. American Flat Track was kind enough to offer the ladies to race at four different rounds this season.

In conjunction, we’re launching a second phase of BUILD TRAIN RACE, which is the road race version. It’ll be a little different this time. We will have video submissions because we really want to understand each woman’s personality and their ideas behind the project. We’ll start with a video submission process for about a month or two, then we’ll make an announcement during a round of MotoAmerica.