What Bike Week in Daytona is for many East Coast bikers, the Laughlin River Run has become for riders in Southern California, Arizona and Nevada. From April 23-27 arguably the largest motorcycle event on the West Coast kicked off the riding season for 2014. 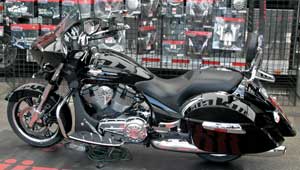 Since it had been a few years since the last time we rode out to the event, we decided it was time to check it out once again. While the regulars noted attendance was flat (local press gave a very generous estimate of 45,000 attendees), it was still a crowd that was in town to spend money on their motorcycling habit.

In order to capitalize on the enthusiastic crowd, many of the vendors went all out. For example, Küryakyn chose to kick off its 25th Anniversary celebration this year in Laughlin rather than Daytona, debuting a couple new product lines, custom bike builds (including “Project 25” 2012 Harley-Davidson Street Glide) and even multiple semi trucks with its new anniversary livery. Vance & Hines also had a semi truck full of new things to show off, namely its revolutionary FP3 fuel management system. Progressive Suspension joined the fray with a brand new Sprinter van and an entirely new look for the self-professed leading manufacturer of motorcycle suspension. 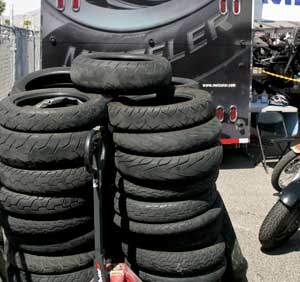 The OEMs also pulled out all the stops. Depending on which direction you entered town from, you encountered Indian/Victory and Yamaha/Star down by Don Laughlin’s Riverside Resort or Harley-Davidson’s demo ride pavilion on the other end of town and on the other side of the street from the Edgewater, with literally hundreds of smaller vendors serving as the buffer zone. Speaking of buffer zones, the strict “no colors” policy that has been in effect since the 2002 River Run Riot when a battle between Hell’s Angels and the Mongols left three dead and 13 critically injured really has worked for the past decade. In fact, most of the vendors and attendees that we polled didn’t even know about the riot. 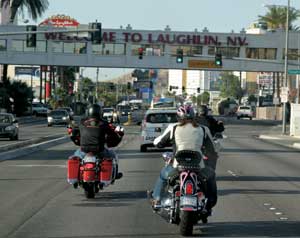 Of course that means they know even less about the history of the River Run when a Harley dealer named Dal Marschke wanted to take his customers on a fun weekend ride. Starting in 1983 with 426 participants, the show has flourished in the past three decades. Who cares about ancient history when you have a hot prospect at the Performance Machine rig looking to drop $2,500 on a set of wheels, or a guy at the Yamaha event truck wanting to buy the Bolt demo bike on the spot?

It may not be the world’s biggest biker rally, but for vendors looking to make an impression on the SoCal scene, Laughlin is definitely worth the effort in the long run.