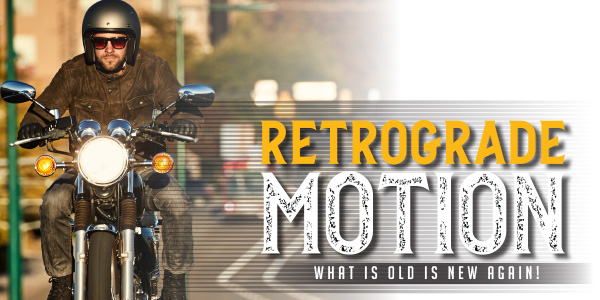 Slab seats, flat bars and universal tread tires… what is old is new again. In a case of retrograde motion, these classic hallmarks seem to be the choice of builders these days (see sidebar on the Handbuilt show).

Slab seats, flat bars and universal tread tires… what is old is new again. In a case of retrograde motion, these classic hallmarks seem to be the choice of builders these days (see sidebar on the Handbuilt show). But where is the opportunity for dealers in this retro craze other than selling some exhaust wrap or Firestone car tires?  “I cringe when I see a CB350 with an audibly loose cam chain or a smoking SR500 rolling down the street,” admits Motorcyclist magazine’s Ari Henning. 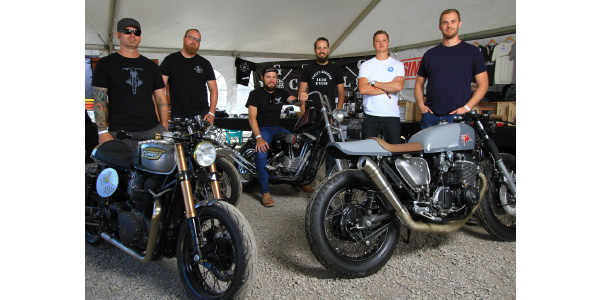 Fortunately there is more to this niche than hipsters destroying old CB350s! With Scramblers coming from OEMs as diverse as Ducati and BMW, the paradigm is shifting. Triumph has embraced its heritage and Royal Enfield is reviving the 1950s vibe when Rockers rode British bikes and aspired to do the ton (when they weren’t busy sticking more pins and patches on their leather jackets). We are also seeing the return of the “UJM” of the 1970s with bikes like Yamaha’s range of sport-heritage models and the new Honda CB500.

“Ten years ago, Honda CB cafe racers were a huge part of the custom renaissance,” notes Bike EXIF founder Chris Hunter. “Low slung CBs were everywhere, ‘brat cafe’ became a phrase, and for vendors of pipewrap and Firestone tires, it was like all their Christmases had come at once,” says the self-published arbiter of bike culture. Bike EXIF is an online magazine that showcases the coolest custom motorcycles, several days a week – cafe racers, scramblers, trackers and bobbers from the world’s best builders. 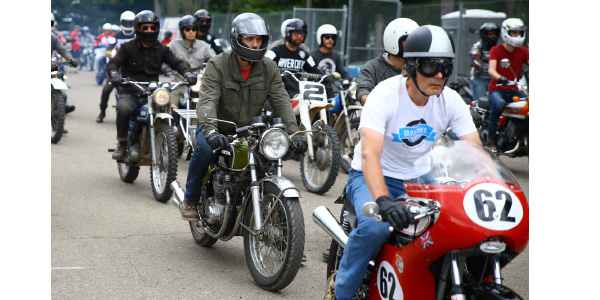 Specifically the new Honda CB500F seems to be a reincarnation of its popular predecessors… at least in spirit. The wire wheels and generic UJM styling may be gone, but Honda is playing the same marketing cues. “Everyone’s looking for the one motorcycle that can do it all – that you can start out on, that fits a wide variety of riders, that can take you to work, school, or on a weekend ride,” is the marketing spiel for the biggest value in the 500 class “Used to be there were tons of bikes in this ‘standard’ class. Not so many these days. But here’s the good news: The Honda CB500F is probably the best do-it-all middle-displacement streetbike around.”

Honda revolutionized the world of motorcycling with their mid-sized twins a generation ago… and they want the market back. “With its minimal bodywork, a classic riding position, and a 30.9-inch seat height that fits a wide range of riders, the CB500F is going to suit just about any rider. It’s a great bike to start out on, or to come back to, or to just ride forever. It embraces the best of motorcycling, and doesn’t get sidetracked with too much flavor-of-the-week design. You want an authentic ride? It just doesn’t get any better than a CB500F.” 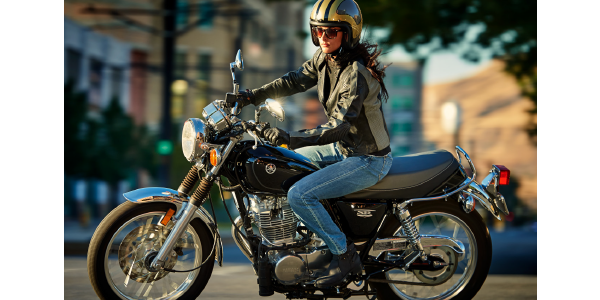 “Everyone wants so badly to be ‘authentic,’” wrote Henning in a recent Megaphone column. “What’s more genuine than a proper vintage bike, brought back to life and customized with your own two hands? It’s a romantic and compelling vision indeed, but making an old bike road worthy usually entails far more time, money and frustration than anticipated… The road to retro-racer paradise is littered with half-finished, non-running CBs, RDs and XSs.”

“Ari and I are on the same page,” adds Zack Courts, executive editor for Motorcyclist magazine. “Even if you already knew how to set points, battle Lucas the Prince of Darkness for mystery electrical problems or heard rumors of having to sync carbs, a clapped-out Craigslist special is probably going to alienate far more potential riders than it will bring people into the motorcycle community. As much as we appreciate the original UJMs of the 1970s, homebuilt vintage bikes are usually a terrible starting point for a new rider.” 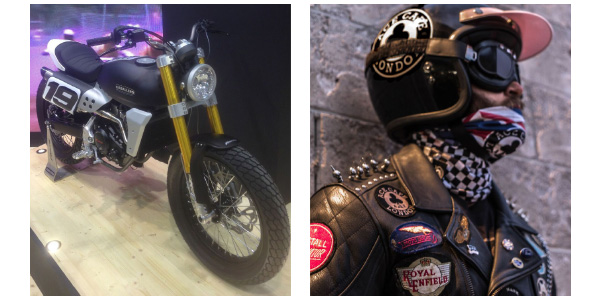 Instead, the dynamic duo from Motorcyclist embrace the current crop of retro bikes that are beginning to dominate dealerships. “Triumph, Ducati, BMW, Yamaha and others are all responding to the craze and cranking out beautiful bikes that combine that ‘70s look with ABS brakes, fuel injection, radial tires and advanced electronics,” says Henning. “A modern retro bike may not be ‘authentic’ but it is going to start – and stop – better than the real McCoy ever did even when it was new 40 years ago!”

To that end, Yamaha brought the venerable SR400 back for the people who need to have a more reliable starting point than a rusted out XS650. “The Yamaha SR400 is the perfect motorcycle for both the custom bike builder and the rider who loves personalization,” says Yamaha Street Motorcycle Media Relations Manager Marcus DeMichele. “The SR is world renowned for its basis as the perfect platform as a Café or Street Tracker machine. Personalization and customization are limited only by the designer’s imagination.”

And for the hipsters, the SR400 even features an “authentic” kick starter. “Virtually unique among today’s street bikes, there’s no push-button starter,” he adds. “That will draw smiles from old-school motorcycle fans and appeal to more modern motorcycle enthusiasts who value authenticity in their motorcycle.” 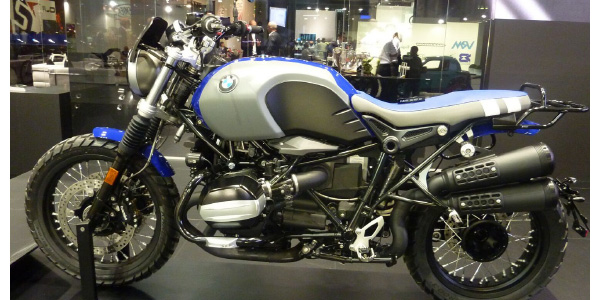 Other than a kickstarter, what could be more authentic than a Triumph Bonneville or a Royal Enfield Bullet (overlooking the fact that neither marque is made in its original English factory)? Harkening back to the 1950s whenRockers rode British bikes, the Bonneville takes a page from the Motorcyclist playbook. “Triumph took the most famous name in motorcycling and updated it,” says the breathless brochure copy. “We’ve made sure that, to this day, a Bonneville retains all that’s great about the name. You still get the breathtaking looks on a bike that is dependable enough for everyday use, easy and fun to ride. All at an entry level price. So you can still feel the same ride today as they did way back.”

Ad speak aside, this philosophy has proven to be a success and Triumph routinely posts record sales numbers for its “Modern Classics” range of motorcycles at a time when the global market is down. With Triumph’s Bonneville success and Royal Enfield on the rise, maybe it is time for Rule, Britannia to be cranked up on the juke box? Even Ace Cafe has taken over Orlando.

But what if your shop doesn’t have access to any of the new retro rides and your customers could care less about the Queen’s English? The Craigslist crowd is still out there! Rather than alienate them, this month’s Destination Dealer, Revival Cycles created a series of video tutorials to help the DIY crowd revive their old bikes. 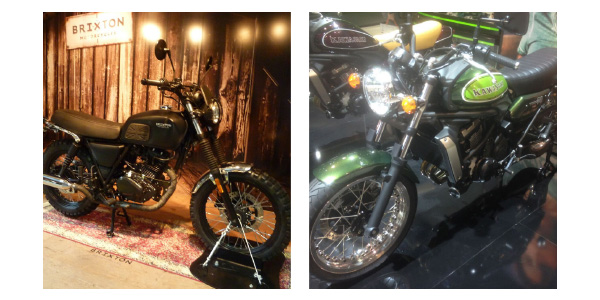 The market for parts for custom creations is a lot broader than the market for custom bikes, so parts sales quickly turned into a major profit center for the shop. “We have diversified the income stream,” says Revival’s Alan Stulberg. The Austin-based shop now sells everything from vintage appearing spark plug wires to leather saddlebags to T-shirts for hipsters to support the lifestyle side.

“There’s still a lot of love for the classic CB conversion, especially amongst shed builders and the Instagram crowd,” concludes Bike EXIF’s Chris Hunter. “But not many people ventured beyond the minor dress-up, until recently.” You can continue to cringe when you see a clapped out Craigslist CB350 “custom”… or you can help convert some clueless hipster into a cash paying customer. 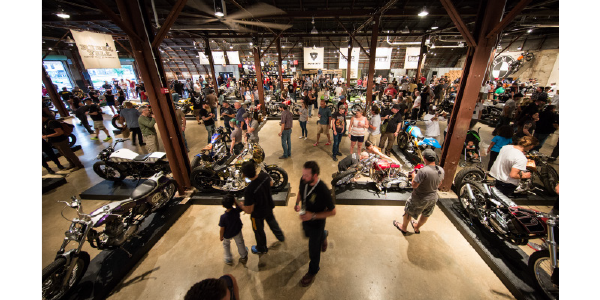 A recipe for success: Take one exhibit center, fill it with the custom creations of some of the best motorcycle builders in this country and beyond, and surround the venue with food trucks. That is the basis for the Handbuilt Show, presented by BMW, and the brainchild of Revival Cycles gurus Alan Stulberg and  Stefan Hertel. A wildly popular event now in its fourth year, the show takes place over three days, bookended by parties with live bands, and costs only 15 bucks for the entire experience, including Wall of Death shows, featuring Indian 101 Scouts from the early 1930’s circling the walls of an oversized barrel.

Most of the motorcycles on display adhere to the cafe-racer ethic and are stripped to the minimum needed to carry a rider safely at speed, although there was a healthy minority of examples with streamlining. The organizers promote the show as a source for ideas and inspiration for riders to learn to work with their hands and build their own two-wheeled vision.

The Handbuilt show takes place during MotoGP week at the nearby Circuit of the Americas racetrack in Austin Texas, allowing enthusiasts to spend an entire vacation soaking in motorcycle culture.

THE RETURN OF BELL HELMETS
By Margie Siegal 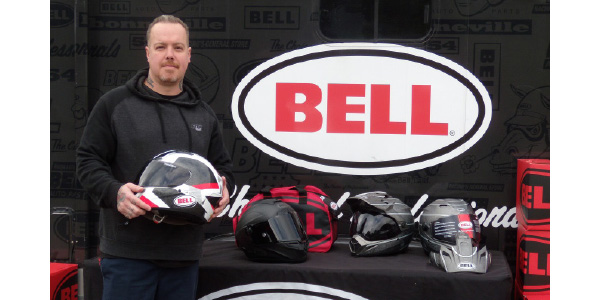 A lot of years ago, a Bell Helmet was what you put on your head. Then the company lost its way in a race to the bottom. Recently, however, Bell has come back to the higher end of the market, and is devoting resources into carving out a niche for itself. “Before, one person was doing everything in terms of marketing,” says Brett Conley, Brand Marketing Manager, Culture/Cruising Segment. “Now we have more of a focus on categories. We have three specialists, who are tasked with feedback on what each market segment wants. We have more focus on specific demographics.”

“Today’s customer is more informed,” Brett continues. “It’s important for sales personnel to be educated on what customers want. Retail can only compete with the Internet if the store provides added value through customer service and information. People will pay for knowledge and service. This is why we are doing brand seminars with our accounts, so the staff is comfortable explaining the features of our helmets. We also have an online training site available to dealers. This is a free service to our retailers. We want to help support the dealer and help service the customer.”

Bell Helmets is participating in all the Bonnier (Cycle World) events taking place this year, with an eye to increasing the visibility of the company’s extended helmet range.

Retrograde Motion: What is Old is New Again!