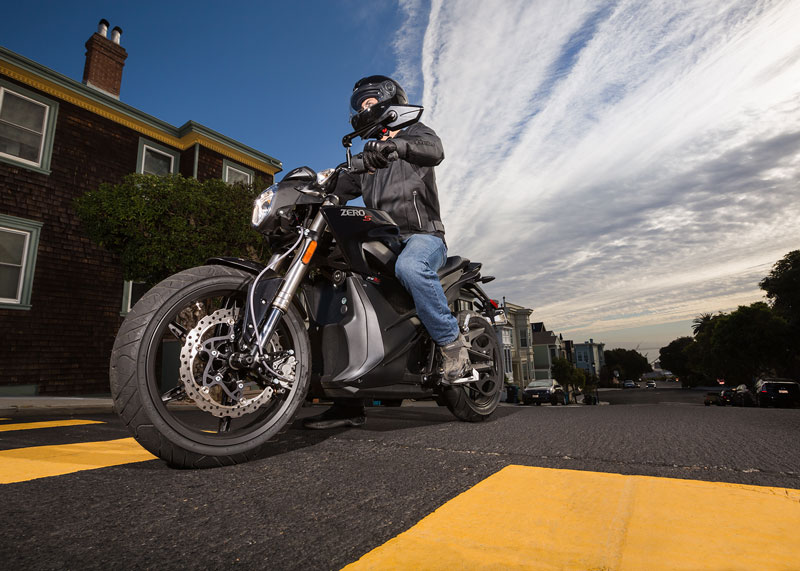 Motorcycle riders don’t just save themselves time and money, they do the same for car drivers. 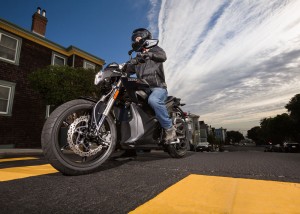 [dropcap]M[/dropcap]otorcycle riders don’t just save themselves time and money, they do the same for car drivers. They also help to reduce emissions by cutting back on the number of cars on the road… At least that is the conclusion of global transportation experts. Through the miracle of social media, this story has made mainstream news in America in conjunction with the recent lane filtering law change in Oregon. May being Motorcycle Awareness Month and the fact that winter has finally released its hold just in time for gas prices to spike upward have all contributed to making this topic newsworthy outside of the powersports industry.

The sweeping statements about saving time, alleviating stress and even eliminating greenhouse gasses make for good headlines and sound bytes on the nightly news… All fine and dandy, but does it translate to the U.S. marketplace?

“I just returned from an intensive eight day market research trip to Europe,” says Scot Harden, Zero Motorcycles’ VP Global Marketing. “I spoke with dealers and customers in Amsterdam, Berlin, Paris, Milan and London and I can tell you that there are many similarities between the groups… but there are differences, too.” Harden notes the fundamental divide is the difference between motorcycles and scooters rather than the concept of commuting on  two wheels.

“The bigger difference lies between the motorcycle and scooter consumer than the European and American motorcyclist,” Harden elaborates. “The main difference is the heavily imbedded and entrenched scooter market that exists in Europe… simply put, scooters are a cultural phenomenon in Europe.”

Mike Hickman, National Sales Manager for SYM importer Alliance Powersports says they have also seen the cultural divide and are bridging the gap with with a small displacement motorcycle for would-be commuters who won’t go the scooter route. “The 150cc Wolf Classic has been an absolute home run for us, and not just in SoCal. Big cities like Boston, Milwaukee, San Francisco, Columbus and St. Louis have been selling the ever-living life out of this bike,” exclaims Hickman. 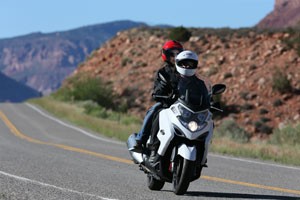 “This is a wonderful commuter bike, with its 17” wheels it makes for a great, comfortable ride,” he adds. “It’s a small displacement bike like no other in America and one that we have really struggled to keep in stock.” Because of the low seat height and light curb weight, the Wolf has proven to be very popular with the ladies and the commuter crowd, claims Hickman. “This bike has also made its way into several M-1 training schools across the country. In addition, we have been contacted by a branch of the U.S. military expressing interest in the Wolf.” 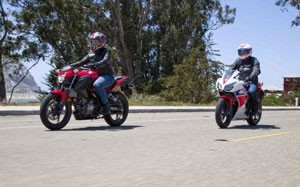 Good things apparently do come in small packages, especially for an emerging commuter contingent. Kawasaki’s best selling sportbike globally has been the “baby Ninja” 250R/300R. Since it was upgraded in 2008, more than 10,000 units a month continue to sell, most of them as commuters. Ditto for Honda’s ubiquitous CBR250R/300R. Commuter motorcycle sales definitely have a place in the global market based on the Big Four’s international sales volumes.

Don’t count out scooters completely though, cautions KYMCO USA’s Director of Marketing, Rick Pawelka. “We have seen many new customers enter the scooter market looking for daily commuter vehicles that are as economical to own as they are to operate.” He notes these are new customers entering the marketplace, not necessarily traditional motorcycle owners. “With the gas prices beginning to rise again, more and more consumers are turning toward alternate means of transportation.”

KYMCO’s MyRoad700i just might get some dealers to rethink their idea of scooters as a viable commuter alternative. This in not some buzzy little 49cc 2-stroke! “It really is the ideal commuter vehicle for the American market,” says Pawelka, pointing out the fuel-injected 699cc parallel twin puts out 58 horsepower! “All the convenience and comfort of a CVT scooter combined with the performance that puts some sportbikes to shame.” 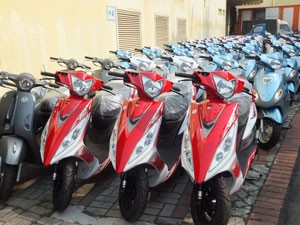 Honda is also targeting the scooter commuter in 2016 with the return of the PCX150. “Known for being practical, versatile and affordable, the PCX150 is great for customers who are looking for the ultimate commuter or a fun way to get around town,” says Lee Edmunds, Manager of Motorcycle Marketing Communications at American Honda. “The PCX150 has a sleek and nimble design, comfortable passenger seat and 12-volt accessory adapter for charging personal electronics. With excellent fuel efficiency and a 2.1-gallon tank, visits to gas stations are few and far between.” What a concept!

Combining the concepts of scooters and EVs is Florida-based upstart Flaunt Electric Vehicles (FEV). Its tag line “don’t just ride it… flaunt it” flies in the face of conventional wisdom, but maybe it is time for the commuter market to make a paradigm shift? “We recognized a need for transportation that is eco-friendly, economical, fun, safe and roadworthy,” explains FEV Director Kevin Mount. “Flaunt Electric Vehicles, Inc., was created to manufacture and distribute a line of industry-leading electric scooters that provide the eco-friendly and economical transportation options that modern consumers want and need.”

“What we love about Flaunt is that it is more than just a fun mode of transportation,” says Mount. “They operate at up to 45 mph, with a range of 30 miles, making them great for running errands and many short commutes.” Flaunt is currently in the final stages of pre-production and has an intended inventory date of summer 2015. “Our plan has always been to start a distributor network throughout the country and sell the scooters directly to dealerships, so that our end-consumers have a centralized place to go for after sale services, upgrades and future  Flaunt models.”

Scooter or 150cc-300cc freeway-capable motorcycle, gas or electric, there is a market for “affordable, alternative transportation” in America concludes the crew at Ooty’s Scooters. The Santa Barbara-based SYM and Genuine Scooter Co. dealer says, “Our goal is to; ease traffic congestion, save gas, and to have some FUN in the process! Each two-wheeler equals one less car.” Now that is our kind of math!

The Study
Back in 2012 TML, a Belgian transportation specialty firm, conducted a comprehensive commuter study. The original research tracked traffic flow between Brussels and Leuven, 10 miles outside of the Belgian capital. TML’s goal was to examine the effect on traffic when commuters swapped from cars to motorcycles. The results impacted all road users, not just the commuters who made the switch to two wheels. 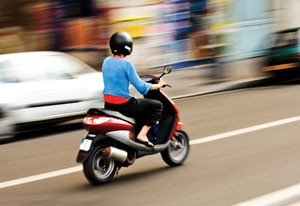 TML documented traffic flow from seven sites on the route, gathered at five-minute intervals around the clock. No surprise that traffic increased between 5 a.m. and 7 a.m., with congestion kicking in from 6:45 a.m. and continuing until about 9 a.m. According to TML’s data, it took an average of 14 minutes longer to travel the 8.5 mile stretch of highway during the 7:50 a.m. peak than it did at 6:40 a.m.

TML quantified this congestion by converting it to “lost vehicle hours” (the time wasted per vehicle occupant because of congestion). Then they factored in motorcycles: as traffic increases, motorcycles use comparatively less space, eventually disappearing as the bikes filter through stalled cars. The study expresses this as a Passenger Car Equivalent (PCE) space. On an open road a motorcycle has the same PCE as a car (1) but as the traffic comes to a standstill, it drops to zero as the bikes filter past stationary cars.

TML then examined the data with one out of every 10 car drivers switching to a motorcycle. The results were impressive… and widespread. Travel time for the remaining 90 percent of car drivers at the 7:50 a.m. peak decreased to just six minutes instead of the usual 14 minutes. Traffic jams started later and broke up sooner. Even more telling, the number of “lost vehicle hours” decreased by a whopping 63 percent.

According to TML, there were environmental benefits, too. With one out of 10 car drivers changing to 250cc commuter bikes (which produce 21 percent less emissions than cars). there was a quantifiable drop in emissions of just 1 percent. The real benefit came from the improved traffic flow as 5 percent less total emissions were generated. In other words, car emissions dropped because they were not stuck in traffic jams.

The fuel economy of cars also improved marginally, however the real benefit to everyone was time savings… and a less tangible, but no less real, reduction in stress. With a 40 percent reduction in traffic hours, 15,000 lost vehicle hours per day could be saved in Belgium alone, according to TML’s conclusions.

Bottom line? Maybe commuters really are good for business. Cut the moto-commuters some slack since they are saving you time, stress, reducing emissions and, more importantly, buying bikes!

Zero Adds Up to the Perfect Commuter
Zero is a performance motorcycle supremely suited for urban commutes… not a scooter! However the average customer needs to know the difference between a performance electric motorcycle and cheap electric scooters from China. Those slow-speed, low-range scooters are not motorcycles and not really suited for the distances of the average American commute. 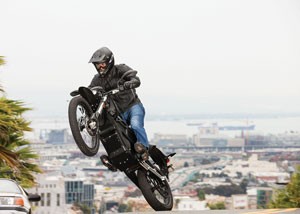 “Zero has been targeted at the performance motorcycle market from the start, but it’s the everyday, seven day a week performance rider that we are focused on,” explains Scot Harden, Zero’s VP of Global Development. “We’re looking for the guy/gal who wants to experience the thrill of motorcycling each time he/she goes to work in the morning or rides home at night… Someone who wants to bring a little bit of their weekend fun and excitement to the everyday drudgery of getting to work.”

Everyday transportation doesn’t have to be boring! “Motorcycles are the perfect vehicle, the perfect excuse to have fun even when you’re focused on attending to mundane daily projects,” says Harden. “We like to think our products entice the consumer to ride as much as possible and for any pretense. Owning an electric motorcycle, even for the jaded and vastly experienced veteran rider, is a thrill that harkens back to your very first ride. There is something very magical about the experience. Our bikes are the perfect seven day a week bike.”

All play and no work doesn’t pay the bills though, so Zero has created a commuter-specific package. “We offer windscreens, soft cases, hard bags, top cases and the lot. Everything required  to convert your bike to the ultimate commuter,” Harden adds. “It’s all designed by Zero to work with our  bikes specifically.”

So can you plug Zero into your market if your dealership isn’t in an urban center? “Certainly large metropolitan markets offer great opportunities, but you would be surprised how well our bikes work in rural areas. We are attracting dealers all over the U.S. Most recently, we signed dealers in Missoula, Montana and Fort Collins, Colorado.” Daily transportation is no less an issue in small towns as the big city. “Our bikes work just as well in these conditions as in Hollywood, California, the site of our largest Zero Dealer, Hollywood Electrics.”

“At this point of our dealer development efforts its more about the dealers passion for the opportunity and conviction about getting a head start in an exciting new market that is only going to develop over the next decade. Market opportunities are available and we have a very unique business plan and proposition for those interested in joining us. We’ve designed a plan that from the dealers perspective makes sense and allows them to get their foot in the door without breaking the bank.”

There must be something to this philosophy… Zero has doubled sales in the past 12 months alone!

Commuter Bikes are Good for Us