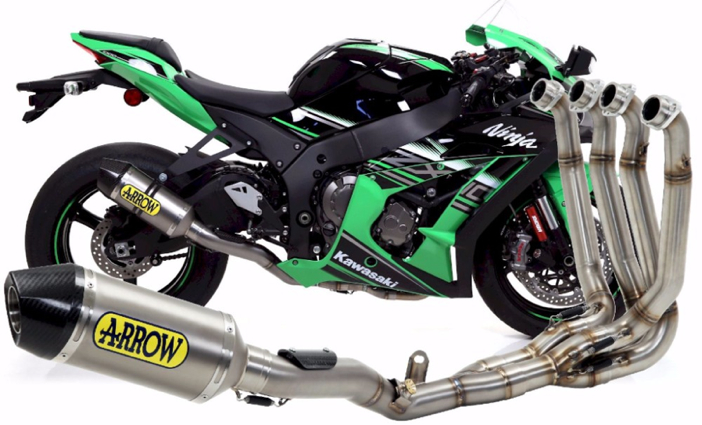 Arrow Exhaust has announced the release of 15 new exhaust fitments for the 2016 Kawasaki ZX10R. The new ZX10R is Kawasaki’s closest interpretation yet of its World Superbike Championship racing machine.

Arrow Exhaust has announced the release of 15 new exhaust fitments for the 2016 Kawasaki ZX10R. The new ZX10R is Kawasaki’s closest interpretation yet of its World Superbike Championship racing machine. Thanks to extensive race development, the 2016 ZX10 features a long list of technical improvements derived directly from the WSBK team.

Raffaele Rossi from the Arrow Technical department states: “This bike really is race ready and we developed these systems with that in mind. Our R&D department worked hard on developing a wide selection of products for this bike and the results are 11 different exhausts (slip-on & half race systems) and 4 full competition race kits. All slip-on silencers can be installed behind the catalyzer or installed on original headers for track-days or racing by utilizing our racing cat delete pipe.”

Rossi continues, “Dyno test results were impressive: the stock power to the rear wheel is around 185hp. With just a slip-on this increases to about 186hp. Once we added the cat delete link pipe with the slip-on silencers (half race system) this number increased to 192hp. With the Arrow half systems, and especially with the Arrow Full Competition systems, there’s an improvement in acceleration and also in torque at both the low end and mid-range of the curve.”

These new exhaust systems for the 2016 Kawasaki ZX10R are now available to order from Arrow’s US Distributor, SpeedMob, or through SpeedMob’s national network of dealers.

Advertisement
In this article:Arrow, Exhaust, Kawasaki