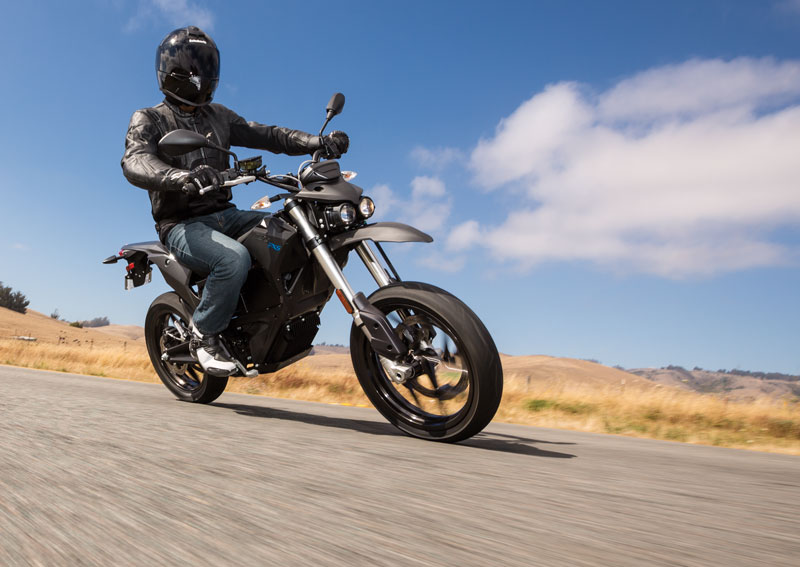 [pullquote]“My guess is large numbers of people will switch to electric cars and bikes for their daily transportation applications over the next 15 or 20 years as more come to realize the hidden advantages…the ‘plug and play’ simplicity mainly, and as the prices of the vehicles continue to drop and the ranges of available vehicle types widens further. Eventually, electric vehicles should actually end up being lower-priced than combustion vehicles for reasons inherent to the underlying technologies involved. At that point the electric vehicle market should explode.”
– Andy Goldfine, Founder,  Aerostich Rider Warehouse. [/pullquote]

[dropcap]T[/dropcap]here must be something about those California garages. All sorts of cutting edge businesses, from West Marine boating equipment to Apple Computers, have gotten started in a garage in California. One of these garage-based startups is Zero Motorcycles, a manufacturer of electric motorcycles that accelerate and handle like traditional internal combustion machines. Started in 2006 in a Santa Cruz, California garage  by Neal Saiki, a former NASA engineer, Zero long ago outgrew its garage, and now sells worldwide from a state-of-the-art factory in nearby Scotts Valley.

Like any startup, Zero faced an array of challenges. When Zero started production, electric motorcycles were seen as short-range mopeds, one step up from a bicycle. The goal was to design and produce an electric motorcycle that would have power, handling and range comparable to gas powered bikes, but the Zero team knew that getting to that goal would be challenging.  The new company needed to either locate or produce an electric motor with power generating characteristics similar to gasoline motors, develop batteries that were not only light and small, but had enhanced power storage capabilities, and design or purchase cycle parts that would enable the motorcycle to handle and stop. In the few years that Zero has been in existence, the company has come a long way towards achieving its goal. The bike is now being sold in the U.S., Canada, Mexico, Panama, Great Britain, Taiwan, Hong Kong, Thailand, many European countries, Nigeria and South Africa. The 2016 range comprises six different models, each with two different battery range capabilities.

Since 2011, Zero started using an electric motor made in Asia that was small and light, but capable of developing considerable power. In 2013, the company launched its own internal designed permanent magnet, air-cooled, direct-drive motor. With this motor, the Zero SR develops 67 horsepower at 4000 rpm and is capable of going more than 100 mph. 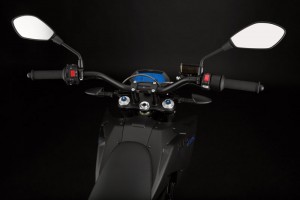 In 2013, a new chassis was also introduced. “With this new platform, Zero came of age,” says Sean McLaughlin, a member of the Zero marketing team. This more robust design took the bikes from interesting novelties to reliable, high performance vehicles.

Battery range has also been an issue, as well as battery weight and charging time. Zero now claims it has the most energy dense battery systems available in a production electric vehicle. Range varies between 41 and 197 miles, depending on model. The new trail bikes have modular batteries that can be swapped out in seconds. Zeros are doing well in hare scramble competitions that take place miles from electric outlets. Although the batteries are still taller than optimum, resulting in 32 -34 inch seat heights, weight has come down considerably. The heaviest 2016 Zero weighs 468 pounds – and there is no need to add the weight of oil or gas to that figure. Final drive is via belt.

Another improvement is the on-board charger that lets a Zero owner simply plug the bike into any 110 volt outlet. Recharge time varies between one and 10 hours, depending on model. The battery pack includes between one and five batteries.

The next step was to get the components needed for state-of-the-art handling on the road and in the dirt. Up until last year, most big components producers were shy of the innovative electric bikes. However, starting in 2015, Zeros began sporting Pirelli tires, Showa suspension and Bosch ABS brakes. 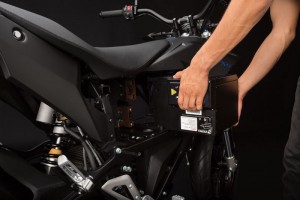 “It took us a while to get these companies on board,” said Chief Technology Officer Abe Askenazi, a former Buell employee. “There was a time when no one returned our calls. Now, we lead the space. They know we’re going to be around.” Sean McLaughlin points out that most consumables on the bike are standard motorcycle items that are sold at most motorcycle retailers, limiting the number of special order parts.
The Zero motorcycle is assembled in California, with much of the motorcycle built in-house. A tour through the Scotts Valley facility starts with the assembly area. Sean explained that assembly runs North to South in the facility. Starting with an aircraft aluminum space frame, the 42-pound motor and the state-of-the-art batteries, built on-site, are added. Sean mentioned that Zero is not a Tesla partner, but the two companies “talk to each other” about any joint interest in reliable, power dense batteries that charge quickly.

Quality control is very important to Zero. Acceptance of any new technology is not possible unless the product performs as advertised. The motors are checked at the Asian facility, then again upon arrival, and all bikes are quality inspected before they leave the facility. The final step is to dyno test each and every bike on the in-house dyno.

The marketing department has studied buyers of Zeros, and believes that they can be divided into three different groups. Sean explains that there are a large group of early adopters, people fascinated by technology and the new, interesting and different. A second cohort are new or returning riders, who may be intimidated by a clutch and shifter – both of which the Zero lacks. A major sales point for Zeros are the rider-friendly features: loads of torque, no shifting, a low center of gravity and smooth power delivery. The third type of buyer is a person with one motorcycle, often a big touring bike, who is looking for a second, lighter motorcycle for short trips. “We get a large number of Harley riders, who often comment that they appreciate the Zero is made in USA,” says Sean. “We also get a lot of BMW and Gold Wing riders.”

The future for Zero is to build on the success of the recent past. Bringing down the size and weight of the batteries while increasing power and storage capacity is a current focus of the development team. Another focus is to reduce cost. Zeros had a major price reduction in 2014, and the company is looking to further lessen out-the-door price, primarily through reduction in battery cost. Although competition from other brands is increasing, Zero believes that the relatively reasonable price and excellent torque and handling will maintain its position in the marketplace.

“The ride experience sells Zeros,” says McLaughlin. “We have facilitated thousands of test rides. People are either pleasantly surprised or blown away. People come in skeptical and are soon convinced. Our motorcycles push people’s happy buttons.” 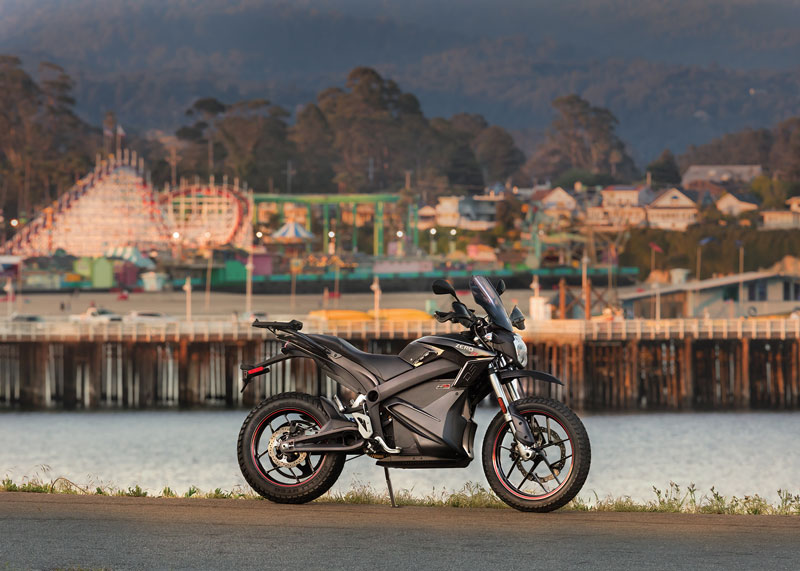 [dropcap]Z[/dropcap]ero Motorcycles recently announced plans for its 10th anniversary celebration. To mark a decade of pioneering electric vehicles, Zero launched a limited edition 10th Anniversary model, rolled out a rich timeline of stories chronicling the rise of the company, and highlighted 10 years of owner savings with a special gift for buyers.

Zero’s heritage involves cutting-edge technology, motorcycle craftsmanship and action sports. After a decade of innovation and California-based manufacturing, Zero is the longest running electric motorcycle company in the world and continues to transform the global landscape of two-wheeled transportation.

“At a time when electric vehicles were little more than a far-flung idea, for even the most tech-savvy riders, the founders saw the potential to transform an industry,” said Zero Motorcycles CEO Richard Walker. “Over the last 10 years, we’ve passed one milestone after another to redefine the motorcycle experience by eliminating the typical heat, complexity, noise, vibration and maintenance headaches of gas-fueled bikes. The result is exhilarating, and we’re still just getting started.”

The centerpiece of Zero’s celebration is the 10th Anniversary Zero DSR. Fifty of the flagship motorcycles will be handcrafted at Zero’s California headquarters. The limited edition model is designed to be Zero’s most elegant and refined, with signature touches of metallic black paint, custom graphics, as well as a full complement of accessories. It’s the first model to include a factory-installed Charge Tank, allowing customers to expand their riding opportunities by using the increasing network of Level 2 charge stations.

As a versatile dual sport, the 10th Anniversary Zero DSR is a nod to Zero’s off-road roots. 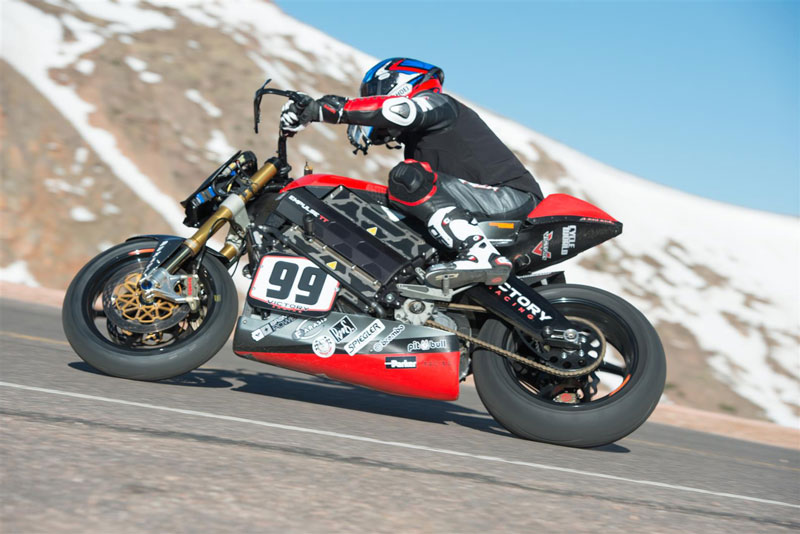 “The hair-raising moment of my run came in a fast 100-mph sweeper approaching Upper Gravel Pit, which is well up the course. I slithered across an oil stain at the apex, then again crossing over the double yellow centerline. In a heart-stopping moment I ran out of road and was off on the dirt shoulder at high speed. Luck was on my side as I stood the bike upright and coasted along looking for the best spot to cut back onto the stepped pavement edge. The excursion completely killed my drive through the following flat-out right and straight that follows,” Canet said about his winning run on the Empulse RR in the PPC-Electric Motorcycle Class. “My hope for a King of the Mountain top time evaporated, however, as the downtime allowed the road to dry prior to the Heavyweight class contenders making their run, there’s almost no way to fully prepare for the track conditions you’ll see in the early morning runs.”