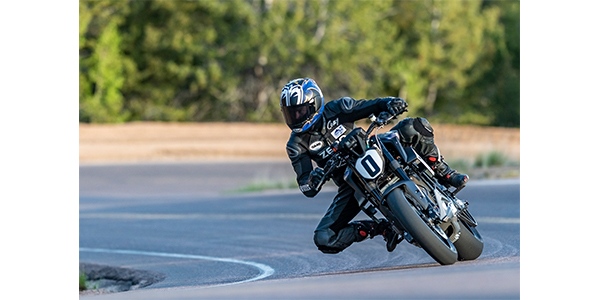 Gates, a provider of power transmission systems, is sponsoring Zero Motorcycles and rider Cory West in the Pikes Peak International Hill Climb on Sunday, June 30, to highlight the advantages of Gates belt drive technologies versus chains on high-torque electric motorcycles such as the Zero SR/F.

Gates and Zero hope the high-performance characteristics of Gates carbon fiber belts, which do not stretch, slack or corrode like chains, will provide an edge for West as he accelerates out of the course’s 156 turns over 12 miles, climbing from the start at 9,390 feet to the finish at 14,155 feet. Unlike the highly modified drivetrains featured on other race bikes, the Zero uses the same Gates belt as the production SR/F available to consumers, which is a “huge benefit,” said Zero’s VP of Product Development Brian Wismann.

“The Gates belt is proven to handle the unique torque characteristics of an electric drivetrain, without the need to constantly monitor the tension and wear associated with chains, which has allowed our team to focus on getting the bike set up for Cory and the Pikes Peak race course,” Wismann said.

Another benefit of the Gates belt is its near-silent operation, which complements the quietness of the electric motor to make a whirring sound that is remarkably different than the louder chain-driven and gasoline-powered motorcycles competing. In test rides, West raved about the quietness of the Gates belt, which allows him to hear his tires tracking on the road, his brake pads squeezing the rotors and his knee pucks skimming the tarmac—allowing him to become better attuned to the operation of his machine.

“I’m amazed by the torque of the Zero electric motor and how quiet and strong the Gates Carbon Drive belt is while I’m putting the power down. This bike has more torque than any superbike I’ve ever ridden. Props to Gates for making something that can handle so much power,” West said.

The Gates sponsorship of Zero comes as the company expands its focus on electric mobility, with a growing portfolio of belt drive products for electric motorcycles, electric scooters, eBikes and other light electric vehicles. This focus comes 12 years after the company entered the pedal bicycle market with its Gates Carbon Drive belt system, which is now used by more than 500 brands worldwide.

“Zero is a leader in high-performance electric motorcycles, and we are excited to partner with them on this thrilling event watched by powersports fans worldwide,” said Chris Vasiliotis, global product engineering manager for Gates Carbon Drive. “Pikes Peak is a great proving ground as Gates expands its offerings within the electric mobility space and brings solutions to consumers and manufacturers of high-performance electric vehicles.”

The only other electric motorcycle to win Pike’s Peak came in 2013. Gates, West and Zero hope to enter the record books as the second. Win or lose, this event and sponsorship showcase the exciting evolution taking place with Gates belt drive systems and electric motorcycles. Fans attending the pre-race events in Colorado Springs, CO, can see the Gates belt drive up close and chat with Gates engineers on Friday evening in the Zero booth during FanFest.