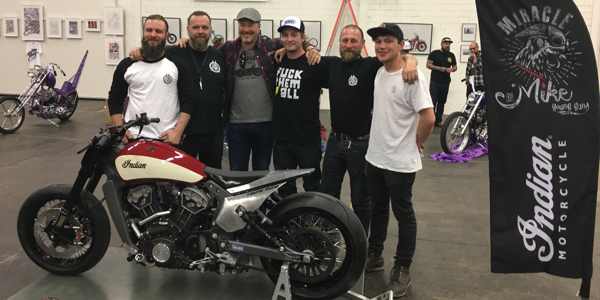 It’s been in the making for six months and this weekend at an art and motorcycle show in Switzerland, Indian Motorcycle and the Young Guns Speed Shop unveiled their Scout sprint racer called ‘Miracle Mike.’

This special machine – with a nitrous oxide system mated to the Scout’s 1133cc v-twin engine – is set for a summer of sprint racing with the first race at the Café Racer Festival near Paris in mid-June.

“It’s been an incredible six months with over 700 hours of work invested in this build,” exclaims Nik Heer. “Myself and Fabian have built many bike projects before but Miracle Mike has been our most ambitious. We’re blown away by the reaction we’ve had here at Art & Wheels.”

Miracle Mike, named after Mike the Headless Chicken, has been built with the official support of Indian Motorcycle and is a true American/European collaboration with parts sourced from motorcycling brands such as Öhlins (Sweden), Brembo (Italy), Wizards of NOS (UK), LSL Motorcycle Parts (Germany), Metzeler tires (Germany) and Motogadget (Germany).

From their workshop in Rapperswil, just south of Zurich, the Young Guns have completely re-wired and reshaped a standard Indian Scout transforming it in to a snarling sprint machine.

“We’re super happy with the bike,” adds Nik, who with Fabian Witzig, rebuilt the Scout using in-house machined parts, a fabricated fuel tank and the addition of a NOS system. “We will now start some engine tuning and speed runs over the coming weeks. We cannot wait to see Miracle Mike fire down its first eighth mile sprint.”

Grant Bester, general manager for Indian Motorcycle in Europe said: “We always knew the Young Guns would do something out of the ordinary with this Scout. They haven’t disappointed. From here this bike will appear at Bike Shed London in a few week’s time and then at the Café Racer Festival and Wheels & Waves in June. We love the Young Guns’ headless chicken logo and we cannot wait to hear Miracle Mike snarl its way to some wins this summer. Indian is certainly re-firing up its racing spirit, both in America on the flat track and here in Europe with this sprint racing and the DTRA Hooligan championship. This is something you’ll be seeing more of from Indian.” 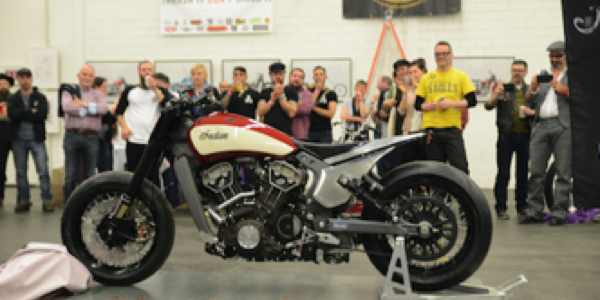 One of the three organizers of Art & Wheels, Marc Baier, says he was thrilled that Indian chose his show to unveil the bike for the first time. “Our show began to share our love of art and motorcycling,” he says. “We’ve known the Young Guns for a while now and were happy they wanted to unveil this bike for the first time in their home country and at a show they’ve supported for many years.”

The build has had support from Öhlins Racing, Akrapovič and Brembo. In particular, this Scout has a set of Brembo’s best brakes. Roberto Pellegrini, Brembo Performance Motorcycle market manager said it was a pleasure for Brembo to collaborate with Indian Motorcycle on this new challenging project adding: “The bike is equipped with the best brake components in terms of performance, with also a particular attention to the design of the products. The front caliper is the Brembo GP4-RX, which represents a significant development in brake caliper design, thanks to the use of software derived from Brembo’s racing experience. This new solution has enabled Brembo to optimise the shape of the brake caliper machining and marks a radical change from standard racing caliper shapes. The braking surface of the SuperSport brake disc is drilled and connected with 10 floating aluminium bushes, the same used in top racing machines.”

The Young Guns will now travel to Bike Shed London (Friday, May 26 to Sunday, May 28) and their first Essenza race is soon after at the Café Racer Festival in Montlhery on Saturday, June 10 (rider to be announced).

Nik and Fabian will also enter Miracle Mike in the Punks Peak race on the Friday of the Wheels & Waves festival (which Indian Motorcycle is sponsoring). This race takes place along the GI-3440 mountain road between San Sebastian and the airport in Spain.