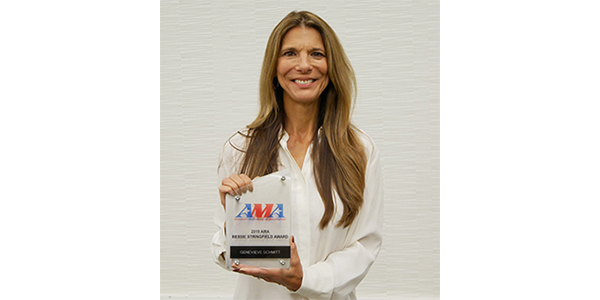 “I am truly humbled and grateful by the AMA choosing me to receive this award,” says Schmitt. “This recognition is a nice validation of the work I’ve done with women and motorcycling for most of my journalism career.” AMA Chairman of the Board Maggie McNally presented Schmitt with the steel and glass engraved award during a special reception at the AIMExpo in Columbus, Ohio.

Schmitt has been a fixture in women’s motorcycling for more than two decades. A rider since 1990, she has worked as a print and television journalist writing for nearly every motorcycle magazine over the years and working as a reporter for Speed Channel and Outdoor Life Network. She was the first woman to report from the seat of a motorcycle and an ATV on TV. In 1999, she was asked to turn around a fledgling women’s motorcycle magazine and from there she made it her business to focus on bringing relevant and timely content to the growing population of women motorcycle riders. In 2006, she turned her attention to the internet and launched WomenRidersNow.com. It has grown to become the premier resource for women and the men who ride with them.

Schmitt started her career in broadcast television working as a producer for Good Morning America, EXTRA and E! Entertainment Television where she earned a Daytime Emmy Award Nomination.